The Ryan Line is open: Gerry Ryan burns up the airwaves one more time

To mark 40 years of 2FM, RTÉ resurrected the broadcaster in electrifying fashion 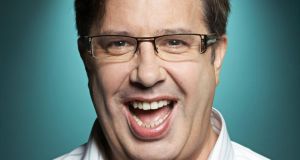 Gerry Ryan: natural broadcaster, but would he still be a star today? Photograph: Mark Read

These days there are any number of unfortunate ways to end a radio career – sexual harassment, insensitive social media posts . . . for many 1980s BBC Radio 1 DJs, the Operation Yewtree police investigation into Jimmy Savile and others. But it’s a testament to the enduring reputation of Gerry Ryan that his untimely death in 2010 has proved no impediment to making a comeback, in the startling form of The Ryan Line (2FM, Friday).

Unsuspecting listeners tuning into 2FM’s new breakfast duo of Doireann Garrihy and Eoghan McDermott at 9am are instead greeted by Ryan’s baritone declaring that he’s ready to talk to the nation once more: “I’m back!”

The Ryan Line is presented as a live show, airing in real time

Of course, the much-missed 2FM presenter is not somehow back broadcasting from Montrose’s Radio Centre. Rather, it’s one-off hour-long special, consisting of clips of Ryan in his pomp and broadcast to mark 40th birthday of RTÉ’s pop music station. But while the programme is preceded by a touching tribute by Ryan’s daughter Lottie, herself a presenter on 2FM, it isn’t a standard compilation of archive excerpts. In a neat and impeccably executed twist, conceived by Will Leahy and JJ Hartigan, the Ryan Line is presented as a live show, airing in real time.

The results could be clunky, but the 500-odd clips are spliced with such expertise and imagination that the effect is not only convincing but electrifying. “This is a very special day,” Ryan is heard saying. “Forty years ago today, if you’re taking notes, 2FM took to the air.” Other editing tricks add to the illusion. Ryan gives out Leaving Cert tips, notes that it’s the summer bank holiday weekend and delivers time checks. “It’s 12 minutes to 10,” he says, bang on 9.48am.

Such technical sleights of hand are impressive, but their main purpose is to help suspend the listener’s disbelief: at times one almost thinks Ryan is back behind the microphone. All the familiar elements are there. He converses with callers about risqué topics and delivers opinions on the songs being played, all the while buffing his own mythology, with many third person references to “G Ryan”. Hence he remembers being hungover after a night “on the lash” in a gay nightclub with fellow 2FM DJ Vincent Hanley, gleefully describing “the smell of poppers was lifting the roof off the place”. That both parties are gone makes this poignant, but it underlines the open-mindedness with which Ryan always conducted proceedings.

So authentic does it all sound that one starts tut-tutting at some of the quips, wondering how the presenter can get away with such things nowadays

There are other memorable discussions on the efficacy of urine as a treatment for skin ailments and, ever the would-be transgressive rebel, on the use of vibrators. An A&E worker shares a particular icky story about recovering the latter device from a man’s “back passage”, providing irresistible opportunities for naughty asides from Ryan: “His bottom was humming.”

So authentic does it all sound that one starts tut-tutting at some of the quips, wondering how the presenter can get away with such things nowadays. Certainly, Ryan’s freewheeling style sounds anachronistic at times. The use of vibrators makes him muse whether men will become redundant, while he jokily calls a female caller a “minx”, a term which hardly passes muster in our woke times. Likewise there are times when his orotund delivery has a touch of mansplaining to it. If Ryan were still broadcasting, it seems unlikely he’d be the star of a youth-oriented station: his style could just as easily lend itself to the grumpy old man school of talk radio.

But such caveats aside, the main takeaway is what a natural broadcaster Ryan was, how easily he bonded with his callers and how, for all his evident ego, how much he enjoyed a rapport with his audience. (It helps that a one-hour duration elides his more self-indulgent side.) And the clips highlight that for all the larger-than-life persona, there were reflective moments too.

As the programme nears the end, Ryan talks wistfully about the cross-generation appeal of the band Snow Patrol. “For older people, it’s a lifeline to when you were younger, a little less wise and a little less worried.”

It may be a clever exercise in nostalgia, but the resurrected Ryan Line has much the same impact on its listeners, a fitting way to remember one of the legendary figures of Irish radio. “It’s been great fun being with you,” Ryan says, in closing.

The feeling is mutual.

Brian Cox: ‘Princess Margaret started to run her fingers down the inside of my shirt’
8