Andrew Scott of Fleabag and Black Mirror on Graham Norton, plus D-Day for surviving veterans and Jennifer Saunders with clips of comedy way way way beyond the pale 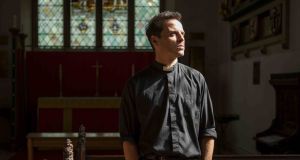 The Graham Norton Show
Friday, BBC One, 10.35pm; Saturday, Virgin One, 9.35pm; Sunday, Virgin Two, 11pm
The host is joined on the sofa by actor Andrew Scott, who used to be best known for playing Moriarty in Sherlock before he won a new wave of fans as the hunky Priest in comedy Fleabag. He is now appearing in Smithereens, the latest instalment of Black Mirror on Netflix. Also: Paloma Faith discusses her music career as well as her role as the villainous Bet Sykes in upcoming DC Comics series Pennyworth, about the early life of Bruce Wayne’s butler Alfred.

Pregnant & Platonic
Friday, BBC Two, 7pm
According to this fascinating documentary, co-parenting – where men and women decide to have a baby together despite not being in a romantic relationship – is on the rise. Alex and Miriam, who are both gay and both want a child, were already friends when they decided to start trying, but they admit the arrangement is complicated by the fact that he lives in Birmingham and she is London. Meanwhile, Desiree met Jamie through a co-parenting website and they’re both thrilled that she’s pregnant. However, it’s not all plain sailing as Jamie’s mother shares some important family medical history and the parents-to-be turn to a mediator for help with their parenting agreement.

She may not be quite as ubiquitous on TV as she once was, but Sarah Millican is still packing them in at her stand-up shows. Here, the comedian performs her latest routine, including topics such as road rage, IBS, her favourite word and how she lets her husband know “tonight’s the night”. There are also stories about “Rescue Men”, passing wind in hospital pants, what can happen at a bra fitting and how Millican feels about her belly.

Three hundred veterans, aged between 90 and 105, board a ship to return to the D-Day beaches in Normandy. They were young men in 1944 when they took part in the largest seaborne landings ever mounted. Some are returning for the first time, some for the last and they will remember the thousands who never came home. One veteran, Jack Mortimer (95), says he simply wants to do his duty and raise a salute to the real heroes. Other veterans include Ernie Pegg, who drove supply lorries; Ken Peppercorn, who was wounded and captured after the landings; Eric Strange, who commanded one of the landing craft; and Ken Tanner, who landed with his tank crew.

If you’ve seen the previous runs of Harry Hill’s panel show, you’ll know that, in theory, it finds the comedian and his celebrity guests looking for humorous clips, people or anything funny that could be used to convince invading aliens that humans are good for a laugh and shouldn’t be exterminated. However, as Hill himself has cheerfully admitted, the format is often abandoned in favour of inspired silliness, surreal gags and general mucking about. The first celebs braving the Fun Capsule experience are Martine McCutcheon, Les Dennis, Alison Hammond and Tom Courtenay.

The Voice Kids
Saturday, UTV, 8pm
Emma Willis presents the third series of the junior version of the singing talent contest, giving seven- to 14-year-old their big chance to achieve stardom. The Voice UK’s Will.i.am returns as one of the four coaches, with McFly’s Danny Jones and pop stars Pixie Lott and Jessie J occupying the other three spinning red chairs. Up for grabs this time is a £30,000 prize to contribute to the winning child’s musical education, along with a family holiday to Universal Orlando Resort.

Killing Eve
Saturday, BBC One, 9.15pm
It’s safe to say that season one of this cat-and-mouse thriller was a huge hit. For this second series, which premiered in in Ireland on RTÉ2 in April, Sandra Oh returns as MI6 agent Eve Polastri, who is on the trail of a deadly psychopathic assassin, with Jodie Comer as merciless hit-girl Villanelle. In fact, RTÉ pulled off a coup by being the first broadcaster to air the series in Europe.

The Handmaid’s Tale
Sunday, Channel 4, 9pm
The third series of this Emmy-winning drama hit Irish screens last week. Series two ended with a cliffhanger, as June/Offred (Elizabeth Moss) stood on the threshold of freedom, but suddenly changed her mind and turned back to Gilead. She’s decided that it’s time to use all her survival skills to start a revolution and take down Gilead – and also find her daughter Hannah. She’s going to face serious dangers, but at least it should be easier than taking down Trump in 2020.

The Sky at Night
Sunday, BBC Four, 10pm
The 50th anniversary of Nasa’s historic Apollo 11 Moon landings is being celebrated this summer with parades, special exhibits, lectures, re-enactments, TV specials and documentaries. In the first of two programmes commemorating the events of July 13th, 1969, the Sky at Night team looks at current plans by China, Israel, India and the US to send manned missions to the lunar surface, as well as plans to build a space station in permanent orbit around the Moon.