63 Up: Documentary marvel makes all other reality TV look trivial 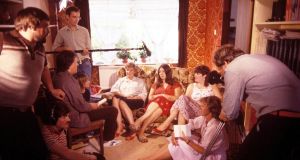 The way they were: Michael Apted filming 28 Up in 1984. Photograph: Richard Johnson/ITV

Although Michael Apted’s groundbreaking documentary series Up remains resolutely focused on the reality of its (originally 14) subjects’ lives, the experience of watching the programmes is becoming strangely more dreamlike with age.

Nine instalments in, we are now at 63 Up. Where does the time go? The children whom Paul Almond first filmed in 1964, and whom Apted has revisited every seven years since then, are now – except for Lynn, who, sadly, died in 2013, a year after the last film was made – heading for retirement age.

Footage from so many previous ages now mingles with the new that it is as if we are watching ghosts playing in a maze. Ebullient children become shy teenagers. Shy teens tag nervous twentysomethings. Nervous twentysomethings shift and thicken into true adults and learn to bend their heads against strong winds, flying branches and other vicissitudes of life.

Last night’s programme, on UTV, caught up with Andrew, the little boy who was first seen in 7 Up singing Waltzing Matilda in Latin with some of his fellow prep-schoolers; Sue, who was insistent in her 20s about not getting married too young and has now been engaged, after a relatively late marriage that nevertheless ended in divorce, to Glen for 20 years (“No plans!” she says, gaily); East End cabbie Tony; and Nick, the boy from the Yorkshire Dales who became a nuclear physicist and lecturer in the United States, and now has throat cancer. “I’m focused on fairly short-term futures at the moment,” he says before enthusiastically explaining some of his treatments and their ramifications. Once a teacher…

The point of the series has always been to test the truth of the Jesuit motto “Give me a child until he is seven and I will show you the man.” Andrew, a lawyer, seems very much still Andrew: quiet, hardworking, modest, appreciative of his privilege and the life that he has seemingly successfully replicated for his children.

Tony – always the most ebullient of the children – has retained almost all the irrepressibility of youth. References suggest one of his children – whose own child he and his wife, Debbie, have brought up as their own – has been through (and put them through) a lot, but he still fizzes with energy and humour. He has bounced back from the collapse of his dream of a second home and a business in Spain and has settled in a semi-retirement-age village back in Essex. No one under 50 can live there, and most of the inhabitants are East Enders who have decamped to the countryside for better golfing and more leisurely pubbing. Although he is starting to regret voting to leave the European Union, he says: “Life couldn’t be better, really!” And their marriage, after his “regretful behaviour” recorded in previous instalments, is “solid”. Or, as Debbie puts it: “Good at the moment.” So many ghosts. Including those of the films not made. I would watch Debbie’s.

His fellow East Ender Sue is also content. Her two children are still single, “got good jobs, bought their own flats”, and she is a university administrator, due to retire in three years and just about able to see that a life without the work she loves might not be too bad. But she worries for others’ futures. “I see homeless people all the time… My generation had wonderful support from the council, which got me on to the ladder and changed my life. People are struggling now.”

Nick remembers his “single moment of pure, unadulterated joy in my life – when my son was handed to me”. His students are wonderful, and he is still “hanging on in there as long as possible with them”. The boy who was educated in a one-room schoolhouse in the Dales loves the US – “It’s a lot easier to get things done here” – although he boggles at Donald Trump. But trips home to Yorkshire still make “other places you go seem rather trivial in comparison”. It is, of course, God’s own country.

Up makes other attempts to replicate the project – let alone the reality-TV shows to which it is sometimes considered a precursor – seem trivial in comparison. Apted has honed his skills over the years, becoming less presumptive and more content to let narratives unfold naturally. And, of course, the unprecedentedly long relationship between the maker and his subjects has led to more give and take between them. Set against the crudeness, manipulation and superficiality of most of what now makes up this part of the televisual field, Up starts to look like an almost noble endeavour, more akin to the raising of a medieval church amid the housing estates thrown up by the rest to make a quick buck. See you at 70 Up, I hope. – Guardian

U2: All That You Can’t Leave Behind (20th Anniversary Edition) review – A timely reminder of their firepower
2