When Conor McMeel and his team-mates won University Challenge, I knew how they felt 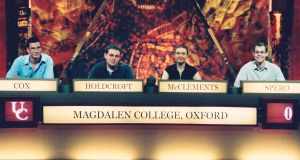 When I watched Conor McMeel and his Imperial College team-mates win University Challenge on Monday night, I knew how they felt.

Sixteen years ago I lifted that same trophy – and when I say lifted, I do mean lifted. The following day my team, Magdalen College, Oxford, was chastised in one of the London papers – the Times, I think it was – for acting like football hooligans and holding the trophy above our heads.

It was a sign of what the world was coming to, apparently, that such scenes should be witnessed on University Challenge, of all programmes.

It is a measure of the significance this student quiz holds in our society – and why, as I watched Imperial and their opponents, Corpus Christi College, Cambridge, slug it out for the title, I knew what was ahead for the winners.

In our final, everything seemed to go right. Too keen to get on the scoreboard, I had developed a terrible habit in previous matches of buzzing incorrectly on the first question; this time, I remember realising the answer was either Albert Camus or Jean-Paul Sartre and forcing myself to pause and think before pressing the buzzer. (It was Sartre.)

After the first two questions we were 50 points to minus 5 ahead of our opponents, Gonville & Caius College, Cambridge. Our lead allowed us to relax, and although at one point Cambridge drew level, they never overtook us, and we were still ahead when I knew – I had been keeping time on my watch under the desk – the match must be nearly over.

Suddenly we heard the gong. There was a brief moment of disbelief, and then the realisation dawned. We had won. When I held it aloft I remember thinking – to misquote Rick and Ilsa in Casablanca – that no matter what I did with the rest of my life I would always have University Challenge.

Usually, people want to know what Jeremy Paxman is really like. The (disappointing) answer is that he was lovely to us, and I certainly never felt under pressure from an inquisitorial stare

And so it has proved. It’s both wonderful and surreal, like having a magic calling card that precedes you wherever you go. (And, yes, it is handy at job interviews.)

Usually, people want to know what Jeremy Paxman is really like. The (disappointing) answer is that he was lovely to us, and I certainly never felt under pressure from an inquisitorial stare. The second question is, Do I always win at pub quizzes? Sadly, no.

The trophy we won was different from today’s slimline version. It was heavy – heavier when held aloft – and as the first institution to win it three times, the programme makers, fair play to them, honoured tradition and let us keep it.

It is now in a case in the Magdalen College library, which I think must make us the only team who get to go back and see it whenever we want.

When Conor McMeel and his team-mates held the University Challenge trophy on Monday night, I was back in that studio, lifting that trophy aloft.

Is Kanye West’s White House bid genuine or a publicity stunt? Or could it be a bipolar episode?
10

Poem of the week: A Pietà
Real news has value SUBSCRIBE