Amanda Palmer: ‘There’s nothing more nuclear than a woman telling it like it is’

The singer on Ireland’s abortion referendum, Fleabag, the joy of crowdfunding, and the weapons-grade rawness of her new album, There Will Be No Intermission 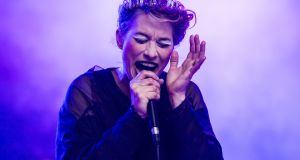 Amanda Palmer: ‘It’s not really in vogue nowadays to show yourself, warts and all, in the age of self-branding and Instagram filters and hashtag-live-your-best-life.’ Photograph: Ant Palmer/Getty Images

Amanda Palmer has never been known for being shy, compromising or circumspect, so when her latest album is being roundly described as her most confessional and personally vulnerable album to date, you’d better believe that we’re talking weapons-grade levels of rawness. She appears physically naked, in a defiant pose, on the cover of There Will Be No Intermission, for a start. Beyond that, the music runs a blistering gamut from grief and cancer to abortion and miscarriage. Where before Palmer might have prodded hard truths with dark satire, she now sings with touching acuity. Also on the album, there appears the dark uncertainty of motherhood (she has a three-year-old son, Anthony, with her husband, the writer Neil Gaiman).

“Parenthood has been really interesting – it’s made me on the one hand more conservative, but artistically more alert than I’ve ever been,” she reflects.

Voicemail for Jill is a standout track, written last summer in Dublin during the referendum to repeal the Eighth Amendment. Palmer had tried to write songs about her personal experiences with abortion previously; in the end, she wrote what she hopes is an “abortion handbook”, or rather, a woman offering a guiding hand to other women. It’s also why, for the first time, Palmer is taking in dates in Cork, Limerick and Belfast on her forthcoming tour – because she wants as many people in Ireland to connect with the music they helped to inspire.

“Róisín [Ingle] and I befriended each other, and she took my hand and literally led me to these pubs filled with feminists, activists and tribe members who filled me with such inspiration and courage for what was possible when people band together to fight for change,” Palmer recalls. “I felt just like I had been trying to write this song since I was 18 and had my first abortion, and being in such openly safe quarters with so many people talking about this topic without shame finally kicked my ass and gave me a voice. You can want to say a lot of things, but sometimes it takes an incredible amount of synchronicity and alchemy to really communicate something. It’s a really hard thing to discuss – it’s so personal and political – there’s nothing like it, and getting the tone right is nigh-on impossible. But it’s not about abortion – it’s about empathy. It’s about human connection.”

It wasn’t just Ireland’s Repeal activists who have emboldened Palmer creatively. Post #MeToo, she notes that the women who spoke out on sexual harassment/assault allegations against Harvey Weinstein and Bill Cosby helped “kick a door down” for her, while the searing confessionalism and vulnerability of Hannah Gadsby, Christine Blasey Ford and Margaret Cho proved what she had long suspected: that women were becoming “shamelessly and infectiously truthful” with one another.

“Two nights ago I got to see Phoebe Waller-Bridge perform Fleabag on the West End stage and she reminded me of what’s possible when you just break out of the script that women are handed. Women sharing the truth of their experience is the most powerful weapon we wield in society. There’s nothing more nuclear than a woman telling it like it is.”

It is, she observes, her duty as a performer to disarm listeners with the truth.

“The more I do this kind of work, the more I have to embrace being a really vulnerable performer and stripping myself bare,” she notes. “It’s not really in vogue nowadays to show yourself, warts and all, in the age of self-branding and Instagram filters and hashtag-live-your-best-life – it takes an extra pound of courage to go out there and show your confusion and pain and grief.”

The current political climate in the US is also writ large on Palmer’s latest work.

I have 150,000 patrons who are willing to pay for whatever I want to create, as an unconditional audience

“America, as you know, is the country that gave birth to the women’s liberation movement, and the civil rights movement – I mean, this is f***ing America we’re talking about,” she observes. “It’s such a fertile country when people get their shit together, but we’re incredibly disorganised and messy and volatile right now. The whole thing would exhaust you to death.”

The themes on There Will Be No Intermission have been met with a “massive wave of recognition and relief”.

“Viktor Frankl has a great quote about how you can’t compare human suffering as it will fill up any space it’s in, no matter how large the space,” Palmer says. “There’s not a mother who can’t relate to the potential grief or losing a child.

“In a way, I see our job as an artist as a service position. It’s the opposite of what we were taught about artists in the ’80s, when they were these untouchable, exalted stars,” she continues. “By definition, we have to sit with the more difficult thoughts, then come back with more useful reflections for the rest of society. It’s a really unromantic way of putting it, but it’s true.”

This third album, Palmer reveals, is not just her most personal work to date, it’s also the most independently produced project she has ever undertaken. There is definitely overlap in the two.

“I had no label, no boss, no dudes in marketing telling me the songs are too long for radio, no one to argue with over the artwork,” she smiles. “I have 15,000 patrons who are willing to pay for whatever I want to create, as an unconditional audience. They have effectively bought the ticket before I even sat down to write anything. The fed me with so much and armed me with an artistic fighting spirit that I’d never felt before. It was possible to get the bottom of what I wanted to say without a niggling feeling that I’d have to convince someone up the line that this was worth putting out in the world.”

After leaving the Roadrunner Records stable, Palmer has been one of crowdfunding’s most outspoken advocates, going so far as to write a book on the subject in 2014 (The Art of Asking). On Kickstarter, Palmer raised a staggering $1.2 million to make her 2012 album, Theatre Is Evil. She pretty much “broke even” on the project, and was famously quoted as saying, “The dirty secret of my Kickstarter is that it was actually a loss leader leading to Patreon.”

On the crowdfunding platform Patreon, around 15,000 of Palmer’s fans have pledged to pay her to create albums, web videos, long-form writing and podcasts. Citing Patreon as a new way for artists to get projects over the finish line, Palmer observes that it has the advantage of not just making it possible to make art fast, but also to make a living from making art fast.

Despite building up a thriving community of appreciators, she encounters many detractors – several times a week and usually on Twitter. Usually, they are demanding her to account for how she spent her million dollars and generally getting creased over her “audacity” for asking for funding in the first place.

“They’re so easy to ignore because they have so little to do with the conversation and the bottom line of how my business is run,” she says.

As we know, to be a woman calling the shots of her own career makes you a tasty target

“I spent the better part of 2012 living in that particular battlefield, putting on my armour every day,” she admits. “When I did my Kickstarter I could feel the arrows piercing my armour, and occasionally one would cut my chest. Instead of shaking it off, I leaned into it. I’ve spent two full years of my life cementing the philosophy around the crowdfunding community to the point where my belief in my self and my system and my community is so critic-proof.”

I venture that much of the criticism she encounters is couched in sexism; many men who run their creative business in a similar way rarely come up against such sustained opprobrium.

“I think there’s a general blanket of sexism all over everything,” Palmer deadpans. “As we know, to be a woman calling the shots of her own career makes you a tasty target. But the thing about crowdfunding is that women are better at it, and doing it more. You can chalk that down to the cultural norm where women know how to connect with their tribes and community. We’ve f***ing had to do that for thousands of years.”

There Will Be No Intermission is out now. Amanda Palmer plays the Cork Opera House on October 23rd, the National Concert Hall in Dublin on October 24th, the Ulster Hall, Belfast on October 26th, and the University Concert Hall, Limerick on October 27th. Tickets can be bought via nointermission.amandapalmer.net