Without seeing the movie, people have opinions on whether it was a right-wing or a left-wing 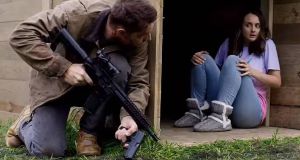 There are many lessons to be drawn from Universal Studio’s cancellation of the hitherto upcoming The Hunt, but, after running through some of the duller ones, we’re going to settle on a general lesson for the ages. Don’t make judgments on a film you haven’t seen. Do we still have to say this?

It seems that Universal had decided to delay The Hunt even before the Orangutan-in-Chief hammered out his pre-release assessment. “Liberal Hollywood is Racist at the highest level,” he grunted. “The movie coming out is made in order to inflame and cause chaos. They create their own violence, and then try to blame others. They are the true racists.”

Donald Trump didn’t mention any specific title, but no correction followed the massed assumption that he was referring to The Hunt. Here are some things we do know about Craig Zobel’s film. Originally titled Red State vs. Blue State (Klaxon! Klaxon!), the satirical thriller imagines a world in which elitists hunt down “deplorables” for sport. Your brain is already racing.

Trump’s tweet oozed out on August 9th, a day before the studio pulled the film

The film was originally scheduled for release on September 27th, but, following the shootings in El Paso and Dayton on August 4th, Universal found themselves saddled with an awkward dilemma. The associations were inescapable.

Trump’s tweet oozed out on August 9th, a day before the studio pulled the film. It later emerged that, the morning after the shootings, Universal began dismantling banners for The Hunt on their lot. The indication was that, rather than giving into political pressure, they had, in the wake of the massacres, immediately decided a release was inappropriate.

There are many precedents. Joel Schumacher’s Phone Booth was delayed after random shootings in Washington DC. Gone Baby Gone was put back in the UK and Ireland following the disappearance of Madeleine McCann. No less a film than Stanley Kubrick’s Dr Strangelove was kicked back a month when President Kennedy was assassinated.

Nonetheless, Trump’s tweet pumped air into the political football that The Hunt had (not entirely inadvertently) become. Everyone seemed to have an opinion on whether it was a right-wing or a left-wing movie. Yet none of these people had seen the bleeding thing.

Adam Serwer of the Atlantic noted: “So just so we are clear, our simple head of state misread the right wing politics of an upcoming film as left wing, which led to its release being cancelled.” Are we clear on that? The Hunt is just the latest uncredited variation on Richard Conbell’s 1924 story The Most Dangerous Game. In every version, the hunters have been the villains (in this case, millionaires in helicopters) and the prey (here, working stiffs in jeans) have had the rooting factor on their side.

American politics are in such a skewed condition that one could imagine (I said “imagine”) such a film having a right-wing tilt. The “deplorables” in overalls could be the Trump voters. Evil Hilary Swank, who runs the operation, could be one of these elitist Democrats we’re always hearing about. Just look at her forename; that missing “l” is fooling nobody. Kyle Smith of the National Review seemed in little doubt. “For once, a genre movie was built around an anti-progressive premise,” he argued.

It seems enormously unlikely – the stuff of science fiction, in fact – but Trump’s contrary opinion may have resulted from reading around the topic. Damon Lindelhof, who co-produced the picture, has described himself as “a lifelong Democrat”. Jason Blum, his collaborator, received Oscar nominations for such impeccably left-wing films as Get Out and BlacKkKlansman. It would be a surprise if The Hunt turned out to be any sort of reactionary screed. Then, again what do I know? Do you know what? I haven’t seen the bleeding film.

It is 23 millennia since Ug of Dork heard about a potentially offensive cave painting at the other end of the ravine. “I don’t need to see the daub to know that it defiles the Badger God!” he yelled while clubbing the artist to death. The conversation has continued in similar vein ever since. Mrs Whitehouse didn’t need to see The Romans in Britain before calling for it to be banned. None of the zealots bellowing at Jean-Luc Godard’s Hail Mary in 1985 needed to see that film. The proposed HBO series Confederate, concerning a dystopia in which the South won the Civil War, got only as far as an announcement in 2017 before being shouted into development oblivion by social media fulminators.

Maybe that last example offers a way forward. Why bother creating the content at all? People rage over The Hunt without seeing it. Confederate fuelled debate without actually existing. We don’t require actors, sets or crew. All we need is a concept that will get punters flinging abuse across the digital airwaves. Anything can be monetised with sufficient will. So can nothing.

Hands off the Toy Show: Why the Grinch can’t steal our Late Late Christmas
3