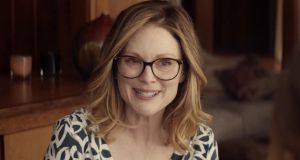 All the voices in her head: Julianne Moore in Gloria Bell

Late Night is loosely inspired by Kaling’s experience of being the only woman – and the only person of colour – in a writing room. Said room is a group of lads struggling to come up with new material for Katherine Newbury (Thompson). The icy TV chat show host, characterised by journalists as “Your Least Favorite Aunt”, is struggling with falling ratings and little or no capacity for the common touch. Upon learning that this season will be her last, a desperate Katherine barks an order to “Just hire a woman”. Enter Molly Patel (Kaling), a fan-girl with no experience but plenty of enthusiasm and cupcakes for all. Kaling’s zippy, big-hearted screenplay finds humour in the diversity hire experience. 15A cert, gen release, 102 min TB Full review

Butler’s follow-up to Handsome Devil concerns the unusual relationship between a depressed Anglo weatherman and the Spanish-speaking worker he hires to paint a damned spot on his patio. The film dabbles in dangerous territory – it could easily have been patronising – but the director’s script and the two leads keep it aloft. The interplay is lively throughout. We end up with a small film that answers most of its own questions satisfactorily. 15A cert, lim release, 99 min DC Full review

A young woman is scarred by an acid attack in this London-set Irish coproduction from Dutch director Polak. Jade (Knight) is discharged from hospital and returns to her mum’s flat, where her appearance causes her daughter to scream. Later Jade recounts a time when her daughter called her a monster during a hospital visit. “But it’s a nice monster,” Jade’s mum explained. Jade takes refuge in partying but finds it impossible to settle back into her old life. Craving invisibility, she wears a burqa. Craving intimacy, she takes to porn sites for dimly lit online sexual encounters. Newcomer Vicky Knight gives a terrific performance that is as complex as her sometimes maddening, frequently stupid but always sympathetic character. Club, QFT, Belfast, 104 min TB Full review

Nemes reunites with Son of Saul co-writer Clara Royer for this sumptuous account of the last days of the Austro-Hungarian empire. In 1913 Budapest, Írisz (Jakab) makes her way to the ritzy hat shop that still bears her family name. Her name immediately startles all those who hear it. Her parents perished in a fire on the site of the shop when Irisz was still an infant. There are rumours that she may have a brother, who may have started the blaze and who may have viciously murdered a count. Characters shift disconcertingly from benevolent to inscrutable to downright menacing from scene to scene. There are odd, archaic rituals with occultish undertones. A strange coda set in the trenches suggests that Sunset is a parable about class struggle, but the deliciously enigmatic screenplay lends itself to multiple readings. A splendid artwork to be admired and puzzled over, featuring fantastic feats of millinery. 15A cert, IFI, Dublin, 142 min TB Full review

Super party-party comedy featuring Dever and Feldstein as a pair of high achieving students who, as they leave high school, make up for lost time by partying like they’ve never partied before. The result is a cavalcade of mayhem that somehow manages to argue for decency in an awful world. It is the sense of discovery that sets it apart. That and its warmth, generosity and openness of spirit A delight. 16 cert, gen release, 102 min DC Full review

Other ★★★★★ and ★★★★☆  films out and about: Amazing Grace, Birds of Passage, Eighth Grade, Float Like a Butterfly, John Wick: Chapter 3 – Parabellum, Rocketman, Thunder Road, Tucked, Woman at War. All current synopses can be found here

Caught by the fuzz pedal: Gaz Coombes on his top Supergrass songs
5

Marita Conlon-McKenna: ‘I didn’t think I would write another Famine novel’
Real news has value SUBSCRIBE