The British Tribe Next Door: ‘I have a bad feeling about this’ 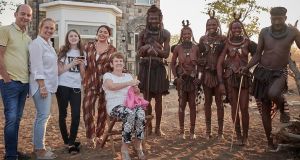 In The British Tribe Next Door, the people at Channel 4 have decided to build an exact replica of Scarlett Moffatt’s suburban family home right next to a Himba tribal settlement in the Namibian desert.

The British Tribe Next Door sounds like the subject line of an irate email written by the Irish people to the Pope or the UN or Arthur Murphy’s Mailbag circa 1168 or, frankly, 2019. So this Channel 4 vehicle for reality television star Scarlett Moffatt rings all sorts of alarm bells (We’re a little skittish in Ireland at the moment).

In The British Tribe Next Door (Tuesday), the people at Channel 4 have decided to build an exact replica of Scarlett Moffatt’s suburban family home, complete with a fenced-off garden, right next to a Himba tribal settlement in the Namibian desert.

They have done this ostensibly so that the Moffat family can learn about Himba ways, although historically that isn’t the only thing that happens when the British turn up on your land and start building things. I don’t know the Otjihimba for, “I have a bad feeling about this” but if it is uttered in this week’s episode it never turns up in the subtitles.

She is famous for being charming and funny on Gogglebox

What is the chirpy, perma-grinning Ms Moffat famous for? According to Wikipedia she is famous for her arachnophobia and a never ceasing lust for “curds and whey”. I’m joking. I’m not one of those forty something doses who says things like, “Lady Gaga? Never heard of her” and calls the internet the “interweb” or even says, “Methinks the interweb is obsessed with this so-called ‘Lady Gaga! ’”

I know who Scarlett Moffatt is. She is famous for being charming and funny on Gogglebox, in which she and her family watched programmes like this and we would watch them watching programmes like this and then our devices would eavesdrop on us watching those programmes and report back to Mark Zuckerberg, who would curate ads for us and predict, for his own amusement, the exact manner, location and hour of our deaths. You can request this metadata, (for me it’s: “bizarre writing accident, the Irish Times building, 11.34 am, September 19th, 2079”).

So, in a sense, their couch and television are members of the Moffatt family and thus it’s natural the couch and television should make the journey with them. I guess it’s only fair to also include their washing machine, dishwasher, kitchen cabinets, carpeting, bedrooms, walls, doors and entire house in the package.

And let’s face it, there’s actually quite a long history of British adventurers “discovering” other peoples’ territory while being carried around on a bier and accompanied by all the mod cons of the age carried on the backs of retainers/Channel 4 interns.

From the Himba goat-herding perspective, I guess it must feel like they’ve acquired some particularly inept interns

So over in Namibia, the Moffatts sit around in their nice sitting room and have fry-ups and stare at their phones before wandering out into the Himbas’ home and workplace, holding foldup chairs under their arms and asking questions like, “So what are you doing?”

From the Himba goat-herding perspective, I guess it must feel like they’ve acquired some particularly inept interns, as the Moffatts quickly prove to be quite useless at goat milking and herd management. “For Mark to lose his cattle like that,” says Mboki, the head herdsman at one point. “He is stupid.” Although this is just what the subtitle read. I suspect he really said, “I have a bad feeling about this.”

Granny Moffatt, Christine, is flirted with by an older Himba man. “How many cows do you think I’m worth?” she asks, clearly thinking of her next negotiation with Channel 4 (the answer is “eight cows”, as her agent probably subsequently made very clear).

The Moffatt patriarch, Mark, unable for grown-up Himba work, goes hunting with skilled machete-wielding eight-year-old Katambo and considers how shiftless and workshy his own offspring are by comparison. It’s unclear what we’re meant to take from this, except that maybe Channel 4 is softening people up for a change in the child labour laws.

But there’s a feeling of lost opportunities everywhere. A little boy talks about wanting to become a nurse and there’s some discussion of the fact some children leave for an education and some do not. A Himba woman, Uakaa. has a baby all alone, silently, because we are told, women in the Himba tribe aren’t meant to complain. Neither of these things are properly explored.

Throughout it all, because we know the Moffatts from telly and we don’t know the Himba people so well, there’s a sense that the latter exist entirely to provide personal epiphanies for the former. At one point Scarlett wonders if she has too much stuff and the experience of tribal life is momentarily reduced to Decluttering with the Moffatts.

And then there are the uncomfortable historical echoes that seem to elude the tone-deaf programme makers. We’ve seen it all before. Along come the friendly “normal” Brits to see what they can learn from the quirky natives.

Before long there’s a tea shop, a garrison and a brutal but polite bureaucracy in the region. When Channel 4 inevitably get in touch with a proposal for a sequel in which the Moffatts’ suburban home is transplanted to Dublin, I think the response will just be, “We’re not falling for that one again.”

Debuting this week was another dubiously premised Channel 4 programme. Just weeks after the horrific news that 38 Vietnamese people were found dead in the back of a truck, Smuggled (Monday) tasks eight Britons with gaining entry to the UK illegally.

So while the British Tribe Next Door is about the learning curve of the Moffatts rather than the story of the Himba, Smuggled is all about eight different people’s no-stakes challenge, not the story of a desperate predicament faced by thousands. The fact that no real migrant voices are included turns this into an episode of the Wacky Races with various recognisable British demographics travelling by boat, train and automobile. Next week will surely featured moustachioed lords in zeppelins and dowagers on horseback and monocled colonels being fired across the sea by catapult.

I know the arguments television producers use: If The British Tribe Next Door or Smuggled had featured the Himba or actual refugees in the starring, not supporting, roles, the British public, deadened by educational cuts and rendered witless by historical jingoism, wouldn’t have bothered watching. “You see, the people we make programmes for are stupid and incurious,” TV producers say. “They need to be tricked into learning about other people.” As a representative of the Irish tribe next door, engaged in our own long-running social experiment with 63 million Moffatts, I can only conclude with, “We know”.