Hold the mic: How Gay Byrne ruled the radio waves 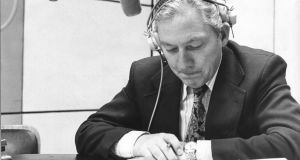 Gay Byrne’s great strength as a radio host was his capacity to listen: his listeners trusted him with secrets they would not share with their nearest and dearest. Photograph: Photograph: Eddie Kelly/The Irish Times

Lest there be any doubt just how deeply woven into Irish life Gay Byrne’s persona was, just listen to Tico’s Tune by Manuel and the Music of the Mountains. (It’s on YouTube.)

This jaunty slice of 1960s’ easy listening remains so instantly familiar as the theme tune to Byrne’s RTÉ radio programme that hearing even the briefest clip evokes not just memories of the presenter, but also a near-Pavlovian expectation for him to start talking as the music fades.

If Byrne’s strength as host of The Late Late Show was his willingness to talk about controversial subjects, his greatness on radio was down to his ability to listen

For 26 years, the music heralded the weekday morning show that showcased Byrne’s astonishing gifts as a broadcaster, not to mention the alertness of his antennae to a changing Irish society.

Along the way, he transformed radio in Ireland, pioneering the participatory, personal approach still heard on our airwaves today. If Byrne’s strength as host of The Late Late Show was his willingness to talk about controversial subjects, his greatness on radio was down to his ability to listen.

In providing a high-profile daily outlet for the experiences of his listeners, as well as their fears and hopes, Byrne’s radio show was arguably an even more important catalyst for change in Ireland than The Late Late Show, in the 1980s at least. It could also be hugely entertaining and enjoyable, which only cemented Byrne’s audience appeal.

Thanks to his television work, he was already a national figure when the Gay Byrne Hour first aired on RTÉ Radio in 1973. From the start, the programme was a huge success, helped by the moribund broadcasting environment as well as by Byrne’s formidable talents.

With RTÉ serving as the State’s only radio station, its programming was sparse and staid, largely confined to news and music. To have as recognised and accomplished a presenter as Byrne helming a morning show was an innovative move: within a few months of its debut, a MORI poll indicated the show had already caused huge shifts in listenership patterns.

In its first years, the programme was light in tone. There was diverting chat, bits of music (though Byrne, ever his own man, played conspicuously few Irish artists) and regular items that ran from the quirky – the “wanted” slot, which once featured an American farmer looking for an Irish wife – to the practical, such as the weekly “shopping basket” comparison of retail prices nationwide.

Sounding so easy on air took a lot of work: it was a hallmark of Byrne’s professionalism that whenever he read his scripts, they sounded ad-libbed

The main selling point was, of course, Byrne. So familiar did his stylistic tics become over the years that it’s easy to forget how groundbreaking and disarming his approach was.

But this combination of informality, wry humour and plain speaking made him compelling company for his (predominantly female) listeners. Of course, sounding so easy on air took a lot of work: it was a hallmark of Byrne’s professionalism that whenever he read his scripts, they sounded ad-libbed.

As he won the loyalty of his audience with his “Uncle Gaybo” persona, he was laying the groundwork for the seminal radio work that was to come.

As the 1970s drew to a close, two developments helped change the tenor of Byrne’s career. First, the programme’s running time was extended to two hours and renamed the Gay Byrne Show. Second, the show got a new producer, John Caden.

In contrast to The Late Late, which Byrne produced, his radio programme had always been produced by others. On the face of it, the outspokenly left-wing Caden seemed an odd fit for the naturally conservative Byrne. But the producer’s desire to take a more socially aware approach chimed with the presenter’s uncanny instinct for what his audience wanted to hear.

Moreover, Byrne had built up such a rapport with his listeners that they trusted him with secrets they would not share with their nearest and dearest. He received letters that told heartbreaking stories, such as the woman who was abused at age 12 and spent the next two years fearing she was pregnant, never without a brown bag just in case she gave birth.

Byrne would read such tales without undue theatrics: of that particular tale, he simply commented that it was “the saddest I have ever heard”.

Sadder ones were to be heard. In 1984, he famously devoted an entire programme to reading out letters from women moved by the tragic case of Ann Lovett, the Longford schoolgirl who died while secretly giving birth in a Granard grotto.

Byrne’s listeners shared their own experiences of being pregnant and unmarried in a still-pious Ireland. The harrowing stories, which would feature sexual abuse and even infanticide, were quietly read by actors and the presenter himself, who knew that he had tapped into an aspect of Irish life that was hidden yet all too common. “There were too many to ignore,” he said of the letters. “They thank Ann Lovett for giving them the courage to express what they have kept secret.”

In his ability to bring personal dramas to life every day, be they big or small, Byrne was a pioneer of the confessional radio, a genre heard across the airwaves today. But he wasn’t touchy-feely – he could be blunt. In a 1986 item on the single mother’s allowance, he mused whether “there’s a feeling that these girls are getting away with something, this is promiscuity rampant in our society and they are being paid to do it somehow”.

On another occasion, when a caller objecting to the proposed sale of condoms to 16-year-olds added that she didn’t agree with contraception, Byrne curtly deemed her moral opinions irrelevant: “That’s a different thing, that’s a private judgment.”

On such matters, Byrne knew he walked a fine line between public interest and prurience. On regular occasions, he would observe that “It’s about sex, you see, it’s always about sex,” or some such variations on the theme. But equally, he would tackle subjects that were otherwise ignored on the airwaves in the 1980s. Whether talking to Ann, a young mother with Aids, or interviewing John, a gay man who was married with two children, he brought such matters to light in a manner that married empathy with a patriarchal concern.

He never completely hid his salty opinions, particularly when it came to voicing hostility towards republican violence or scepticism about politicians

His directness could be jarring but also yield remarkable results. When Margaret and Leonard McStay first appeared on the show to explain they needed funding to bring their son Colin to America for a liver transplant, Byrne got straight to the point. “Let’s put this baldly,” the presenter said. “He is definitely going to die if this operation doesn’t happen.” The McStays ended up raising a million pounds for the operation.

This ability to listen was crucial in the 1980s, when the phone gradually replaced the letter as his listeners’ preferred mode of communication. Occasionally he found himself irritated by callers – “It’s amazing how people on pay phones are reluctant to talk to you,” he once sighed – but the increased access strengthened the bond between presenter and public.

Just as crucially, Byrne listened to his production team. Under Caden and his successor Alex White, the subjects covered often seemed at odds with Byrne’s natural disposition, but he was curious and adventurous enough to follow their lead. That said, he never completely hid his salty opinions, particularly when it came to voicing hostility towards republican violence or scepticism about politicians. That conservative British papers such as the Daily Mail and the Daily Telegraph were regularly cited was telling in its own way.

The show underwent another shift in the 1990s. Competition came with the arrival of regional stations, the emergence of Gerry Ryan’s talk show on 2FM and the scheduling of Pat Kenny’s magazine programme right after Byrne’s slot. And of course, Byrne was older.

As the decade progressed, the show may gradually have lost its status as the nation’s public forum, but Byrne was as formidable a broadcaster as ever. His distinctive delivery remained, such as his tendency to start off each programme as though in mid-conversation, a disarming trait that drew in listeners. His array of voices likewise remained an enduring and (mostly) endearing part of his arsenal, from his vaguely dismissive “right on”, complete with exaggerated American accent, to the down-to-earth Dublin patois which could signal either approval or ridicule.

Ever the pro, Byrne didn’t overstay his welcome. Having cut down his radio duties to three days a week, he broadcast his final show on December 31st, 1998. It may have been time to go, but it still felt like the end of an era.

Yet his radio career had one final hurrah, in the form of his Sunday show on Lyric. Colloquially named “The Time Warp” by Byrne, the programme featured the presenter’s favourite jazz and swing tunes. But it wasn’t an exercise in warm nostalgia. Just like his glory days, it was studded with cranky opinions and wry anecdotes, as Byrne re-established his rapport with his audience. It was a fine coda to a magnificent career, underlining Gaybo’s unparalleled mastery of the microphone.