The best eight shows on Netflix and Amazon Prime this month

Voyeur, Dark, and Easy all start on Netflix on Friday - perfect for a weekend of binge watchiing 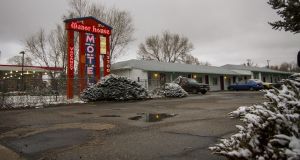 Voyeur is a documentary based on journalist Gay Talese’s New Yorker essay and the controversial book born from it. It is the story of motel owner Gerald Foos who would spy on his customers through vents and peep-holes he made above their rooms. He also managed to convince both of his wives to participate or aid him in his “social experiment” to observe his guests sexual relations and take notes.

Foos reached out to Talese in the 1980s as he was a grandiose writer known for his interest in the sexual revolution and the private peccadilloes of the public. Foos wanted his logs and findings to be taken seriously and thought Talese was the man to help him in a quest to be the kinkier Kinsey.

The documentary is the two telling their tale together for the first time with twists and turns that pose questions about the nature of truth in journalism, manipulation, ownership of stories and exploitation. A fascinating conversation where the secrets of the dark become truly illuminating.

On the surface, the German series Dark seems to have traces of another Netflix hit under its fingernails. Set in a small town it centres on the disappearance of children in a place that is under the shadow of a foreboding nuclear power plant. With its ensemble cast of young actors it could be easily dismissed as Stranger Things’ sombre twin from the European Upside-Down.

Although Dark is a much more serious affair, there’s no campy, retro stylings, no Goonies-ish one-liners, no Steve with his gloriously distracting mane, its supernatural scares are soaked in a disturbing realism.

These are children dealing with the wreckage left behind after the adults in their lives fall apart through suicide and unhappy marriages and then there’s the strong inescapable fear of nuclear disaster at their doorstep. A modern Grimm’s fairy tale with a complex, challenging structure, Dark could be Netflix’s creepy Christmas cracker.

Mumblecore King Joe Swanberg’s sexy sitcom was a sleeper hit for Netflix in late 2016 and now it’s getting a second season. This time around the cast has been expanded to include even more famous faces such as Aubrey Plaza and Kate Berlant who join returning cast members such as Dave Franco and comedian Marc Maron -although it is unclear if they will be playing the characters from the previous season.

The episodic anthology series focuses on an individual character’s story, all from different walks of life in modern day Chicago, all who are grappling with longing, lust and the usual headaches of urban living. These stories are part gossipy anecdotes, part New Yorker modern love tales that form a refreshing, realistic portrait of the rough and tumble of relationships far removed from the usual staid rom-com fare.

Will Meghan Markle get to play herself in future episodes of The Crown or will Lea Michele or Demi Lovato be drafted in with Eddie Redmayne having to making himself less posh to inhabit the role of the playboy prince?

Peter Morgan may be furiously Googling red-haired actors but before all that, the second season of his highly acclaimed royal costume drama has arrived just in time for some seasonal bingeing.

The Crown has now taken its place as the real jewel of Netflix (after House of Cards came toppling down in dramatic fashion) being an overwhelming audience hit and critical darling with Claire Foy’s depiction of Queen Elizabeth II winning rave reviews and scooping up countless prizes this awards season. This was no debutante fluke as the second series continues its resplendent reign.

This time around Queenie is in a spot of bother as the series deals with the monarch becoming more challenging to those around her but also ever more solitary. It focuses on a tumultuous period in her relationship with puffed-up public schoolboy Prince Philip (Matt Smith) who is growing unhappy playing the invisible husband to a wife who is married to duty.

This was also the time of the “youthquake” in the 1960s which saw Elizabeth’s sister Princess Margaret indulge in the freedoms of the era and Vogue sweetheart, the impossibly glamourous Jackie Kennedy visit the palace. The space between the austere Elizabeth (forced to become a reserved sovereign) and the spirited, liberated women of the age further solidifies her presence as an isolated, untouchable figurehead.

In this season, her humanity is beginning to be buried under the weight of responsibility which would eventually take decades to exhume.

Not to be confused with other murderous Netflix fare Mindhunter, Manhunt is an anthology series about the search for the tree-hugging terrorist Ted Kaczynski aka the Unabomber. Starring Paul Bettany as Kaczynski (looking as if he’s about to drop Pitchfork’s hipster folk album of the year) and Sam Worthington as the dogged FBI agent on his trail, it’s a thriller of the satisfyingly cliche variety.

A conventional series where obsessional,sweaty detectives have philosophical conversations in cars and make ground-breaking observations like “I know him like I know myself”, with ultimatums dished out with the bang of a desk.

A bespectacled Chris Noth and a wigged-up Jane Lynch round off the cast. It’s a classier Criminal Minds: dramatic and gripping if a tad generic.

Directed by the prestigious film-maker Errol Morris (The Fog of War, The B-Side) and starring Peter Sarsgaard, Wormwood is a part documentary, part scripted series unearthing the story of Eric Olson’s attempt to uncover the truth behind his father’s death. It mixes Morris’s renowned incisive interview style and a haunting performance from Sarsgaard highlighting the dark spectre of the CIA’s LSD trials and mind-control experiments.

A journey through the waking nightmare of America at its most surreal, it explores a world kept hidden and examines a secret history of paranoia, silent suffering and stupefying shock.

Van Damme wants to Van-Damage your mind with this ultra-meta, post-ironic vehicle for Amazon Prime. Jean Claude plays “Jean Claude Van Damme” action film actor but this version of the Muscles from Brussels is actually using his showbiz career as a cover for his real job as an undercover operative known as “Johnson” (insert double winky-face emoji here)

As is in keeping with the age-old premise of these films, Johnson comes out of retirement one last time after a chance encounter with an ex-lover. Now he’s ready to unleash some iconic martial arts moves and bounce those faceless baddies right back to central casting.

In keeping with the current deification of 80s pop culture Jean Claude Van Johnson is a homage to those lost VHS classics but this time Van Damme is in on the joke as it’s all executed with a sardonic sheen that lampoons the entire genre. Just don’t expect po-faced Putin-pawn Seagal to sign up for the second season.

Will Smith and Joel Edgerton star in this sci-fi/police drama hybrid. Directed by David Ayer (Suicide Squad, End of Watch) Smith plays Daryl Ward an LAPD police officer who teams up with Edgerton’s Nick Jacoby, a globe-faced Orc to investigate some sinister supernatural happenings in a near-future downtown LA.

Sounding like a spoof film from an episode of The Simpsons - Bright is Ayer’s End of Watch but if the Jake Gyllenhaal character was played by Panthro from Thundercats and instead of locating the bounty of dangerous drugs gangs, the duo stumbled across a bewitching magic wand.

Perhaps best enjoyed after a few Christmas shandies, Bright might be the dumb blockbuster fun perfect for those days when your brain has turned into a tangle of tinsel.