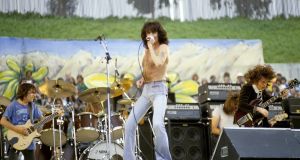 On a visit to Perth in 2000, I stopped off at a suburban cemetery in Fremantle. On arriving at the gate, I asked the caretaker, “Could you tell me where…”

I never got to finish the sentence. “Bon Scott’s grave is over there. Just follow the path,” he said with wearying familiarity while pointing to a clearing among the sun-blanched white headstones.

It is hard to miss the little brown plaque which marks the spot where Bon Scott’s remains were interned in Fremantle Cemetery. Little arrows are scratched along the path – “Bon’s grave – this way”. AC/DC fans have decorated the little plaque and the park bench beside it.

There, in the heat of an Australian January day, I paid a silent tribute to a singer who was dead before I even knew he existed.

Bon Scott occupies a unique place in AC/DC mythology. He died, aged 33, in 1980 just as the band were about to be rewarded for their relentless touring and the success of the album Highway to Hell.

He is the internal larrikin in the AC/DC story, a street poet whose arch observations and clever puns were the perfect accompaniment to the band’s inspired riffs.

Back in Black, the successor to Highway to Hell and an album dedicated to his memory, would be the biggest of AC/DC’s career and to date one of the biggest albums in history – surpassed in sales only by Michael Jackson’s Thriller in the United States, the world’s biggest music market.

AC/DC went on to be global superstars after Scott died and yet many fans feel he personified the soul of the band in a way his more successful replacement Brian Johnson never did.

Jesse Fink’s biography Bon – The Last Highway is a follow-up to his 2013 book The Youngs: The Brothers Who Built AC/DC.

The Youngs was a valiant attempt to break the omerta around this notoriously secretive band. Fink was not deterred by the unwillingness of current and former band members to speak about their experiences in AC/DC.

The book is not a flattering portrait of the Young brothers, Malcolm (now sadly deceased), Angus or George, the producer who died last month. They come across as controlling and ungrateful, but Fink pays them a compliment by taking them and their music seriously – something music critics have consistently failed to do throughout AC/DC’s long career. The book was deservedly an international bestseller.

Bon – The Last Highway is not a conventional biography. It focuses on Scott’s last three years between 1977 and 1980 and the details of his upbringing are told in flashbacks.

It is a fascinating portrait of a troubled man with a serious alcohol addiction. Scott is unmoored from his surroundings. He has not seen his parents in three years.

The relentless cycle of tour, album, tour is wearing him down. He expresses a desire to leave the band, settle down and get married, but always the elusive pay day which would allow him the latitude to make these choices remains tantalisingly out of reach.

Long before AC/DC became world famous, Scott prophesised his future in the song It’s a Long Way to the Top (If You Want To Rock And Roll).

“Hotel, motel/Make you wanna cry/Ladies do the hard sell/know the reason why/gettin’ old/gettin’ grey/gettin’ ripped off underpaid/gettin’ sold, second hand/that’s how it goes playing in a band/ it’s a long way to the top if you want to rock and roll”.

Once again past and present members of the band declined to co-operate with the book and once again Fink had managed to circumvent their opposition by his diligent research.

His book is the literary equivalent of a road movie. He roams across the United States, interviewing those ex-girlfriends and friends who provided the type of companionship Scott does not appear to have got from his own band.

AC/DC appear like shadows in this book. It is clear that while Scott was consumed with the band’s unending schedule, his real life was happening elsewhere. It appears the band did not really know him or him them.

The most interesting encounter in the book is Fink’s meeting with a woman he identifies only as Holly X, a recovered alcoholic living in Florida. She was 20 when she met Scott and the pair were lovers.

Fink makes a compelling case that the lyrics of You Shook Me All Night Long, a standard in AC/DC’s repertoire from the Back in Black album, were written by Scott and not the Young brothers and Brian Johnson.

Scott told Holly X she had chartreuse eyes – a yellow/green colour. The lyrics in You Shook Me All Night Long are “sightless eyes” – a phrase which Fink points out makes no sense. Was it the case that the Young brothers simply didn’t know what the word chartreuse meant? Neither would most of us.

Holly X also had a chestnut mare called Doubletime – again AC/DC fans will know the line from the song “working double the time on the seduction line”.

Fink addresses at length the notion that the lyrics in Back in Black were written wholly or partially by Scott. The conventional wisdom is that the lyrics were simply too clever to be written by anyone else.

As one acquaintance of the singer put it in the book: “Bon was extremely clever, tongue in cheek, play on words. Brian Johnson’s just like some guy pandering to however many metaphors for his dick he can come up with.”

AC/DC fans will recognise a lot of truth in that, but Fink advances no hard evidence that the lyrics in Back in Black, with the exception of You Shook Me All Night Long, were written by Scott.

There is talk of a notebook that Scott left behind him after his death, but it is no more than speculation.

Fink devotes nearly 140 pages to the circumstances behind Scott’s death on February 19th, 1980 in Overhill Road, Dulwich, south London. The author has forensically interrogated the existing evidence and the witnesses involved. He produces a vivid picture of a twilight world inhabited by drug-addled rock denizens of London in the early 1980s.

Fink has done a prodigious amount of research, but this section of the book needed editing.

The length he goes to explain the different accounts of what happened would be appropriate if Scott, for instance, had died by foul play, but this is not suggested here. There is simply too much detail for the reader to process.

Fortunately, Fink has synthesised his research into two theories – both involve Scott (spoiler alert) dying from a heroin overdose or a combination of heroin and alcohol. (The conventional story is that Scott choked to death from alcoholic poisoning in the back of a car belonging to his friend Alistair Kinnear outside Kinnear’s home in East Dulwich).

Either way Scott’s death was a tragedy and unnecessary. Fink’s portrait is largely sympathetic, but unflinching in pointing out the bad choices Scott made that led to his premature death.

Fink approached the former AC/DC drummer Phil Rudd while writing the book. He offered to participate but then declined, saying he had been told to say nothing.

Rudd had been jettisoned in 2015 after a drugs bust in New Zealand. The band disgracefully mocked his exodus in a succession of interviews. It is a pity he could not be persuaded to talk. He would have an interesting story to tell.

Then singer Brian Johnson was forced to quit the band last year because of hearing loss. The perfunctory nature of the press release issued after his departure, thanking him for his service as if he had been a roadie on a tour instead of the band’s singer for 36 years, shocked many fans, but was in keeping with the failings Fink wrote about in his previous book on the Young brothers.

Now that Malcolm Young is dead, it is surely the end for one of the greatest bands in history. Perhaps now is the right time to write a definitive biography of the band.

Fink does not claim his book is definitive, but it is a damn good effort.
Bon: the Last Highway is published by Black & White Publishing priced €19.99