Choir of Ages: Dublin and Leitrim find their voices 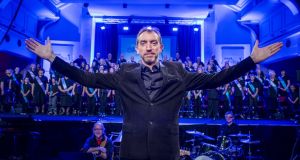 Without being too cloying about it, the conductor and choirmaster David Brophy would like to teach the world to sing.

He is already off to a promising start. Three years ago his first series assembled the High Hopes choir, a group comprised of people affected by homelessness, addressing the problem with stigma-shunning co-operation and a charity single.

At the outset, Brophy’s new endeavour in Choir of Ages (RTÉ One, Thursday, 10.15pm) seems to be of more modest social benefit. In both Dublin and Leitrim, it draws together older and younger voices, wavering and weathered on one side, tentative and unruly on the other, with a mission to perform together in a concert in the RDS. That goal, however, is really a McGuffin, or, in this case, a grace note.

David Brophy's Choir of Ages, Thursday at 10.15pm, creates a choir featuring some of Ireland's youngest and oldest citizens! pic.twitter.com/ztzpvsZ95V

Wiry and ebullient, Brophy speaks of “intergenerational co-operation”, on his recruitment drive through a Crumlin community centre and a Ballagh church hall, but to camera, his tune is clearer. Both of these groups are isolated in their own way, he contends, with older people in rural areas especially vulnerable to loneliness, and kids stilted behind an array of digital screens. Their harmony will never be perfect, where wavering and tentative voices meet, but there’s something sincere in this desire for a transfusion of energy. The older folks brighten up and the kids straighten up: the choir depends as much on energy as discipline.

As with the last series, the show knows how to pick out individual voices from the polyphony. Early on we meet Harry, a retired bus conductor, and later his wife, Rita, in a care facility with dementia.

“I think life is not complete unless you have music or art,” Harry says, which makes it more uplifting to find him again in earnest conversation with Ben, a rapt seven-year-old with a whirring fidget spinner, picking over the finer points of Perry Como (“Mary Como?”), or, as one white-haired woman puts it warily, “Justin Beaver?”

Sure, there are plenty of expectedly treacly exchanges, which makes it wise to feature the heroically unimpressed Olive, a retired school principal, upbraiding a deputised choir leader for his lack of discipline.

It’s an important lesson because soon everyone is singing from the same hymn sheet – even if that hymn sheet is a YouTube video of How Far I’ll Go from Disney’s Moana. Here too is a charming show, and it’s suitable for all ages.

TV guide: 25 of the best shows to watch this week