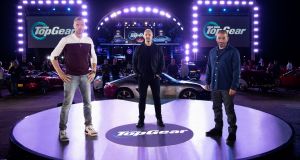 I imagine the BBC rues the day Jeremy Clarkson hit an Irishman for failing to bring him hot meats. They had to fire Clarkson after that and Top Gear never really got its mojo back. It wasn’t the 1970s, you see, and you couldn’t just abuse Irishmen willy-nilly anymore, even on the BBC.

For some people it must have been surprising that Clarkson’s iteration of Top Gear had lasted so long. It had made some sense at the time. It flourished during the era when Tony Blair’s relaxed approach to wealth was curdling into David Cameron’s relaxed approach to poverty. Back then the sight of three millionaires destroying cars while being “ironically” chauvinistic each week seemed like appropriate public service broadcasting. It was, as they say, a different time.

Even then Top Gear was a legacy title. There had been earlier, lower profile iterations in which men with monocles and leather driving gloves said things like “What ho! it’s a fine horseless carriage!”. I’m sure they were tempted in Clarkson’s day to change the name of his version to “Top Bants” and give the name Top Gear back to Richard Madeley or a hand puppet with driving goggles but the cruel reality was that their legacy title slowly became inextricably linked to Clarkson and his chuckling chums.

Over time it was as though the very concept of a male mid-life crisis had metastasised and bought a paisley shirt and brown shoes and stuffed itself into some bluejeans (when middle-aged men wear jeans there’s no separation of words). It was hard to row back to an earlier form, even after Clarkson was fired and May and Hammond chose to immolate themselves on his pyre (The Grand Tour, over on Amazon).

So, post-Clarkson, the BBC persisted with A-list presenters like Joey from Friends and cheeky-chappy archetype Chris Evans. Paddy McGuinness is, in many ways, a much better anchor for it because he’s largely a quiz show presenter whose fee is a nice sandwich. Putting Paddy McGuinness in this role is a clever way of signalling that the show has let go of some of its notions.

His co-presenters are Chris Harris, a likeably excitable fellow who isn’t really famous, and Freddie Flintoff, an alliteratively handsome man carved from the finest ham. Flintoff is famous. He plays cricket, a fictional sport that you’ll recognise from the Harry Potter books.

He assumes we are perpetually weeing on ourselves and showing our arses. That might be true, Flintoff, but we don’t like handsome quidditch players rubbing it in

This trio greet the pandemic from a large outdoor stage in front of an audience of traffic fans sitting in their cars, occasionally beeping their horns. They call each other by their second names, then drive around in different brrrm-brrrms like the members of Paw Patrol, although at least those dogs have services to provide while these humans are just on some sort of nihilistically endless dark night of the soul.

Their stunt of the week involves them spending 24 hours stuck in a trio of fancy company cars in Bolton, which is a demotion from the expense-burning colonial junkets of yore. Bolton is the frontier of empire now. They drive fast around a racetrack, then up and down a multistorey car park. They chat over walkie-talkie and say things like: “This thing is an absolute missile.” They slap each other’s helmets, Three Stooges-style. McGuinness and Flintoff have an argument about whether Bolton is in Lancashire or Greater Manchester until I start screaming. I’m frequently reminded of a loud heckle a friend’s band once received: “You’re having your fun, but what about the rest of us?”

The high point of the show is when Flintoff accidentally wees on himself, covers himself with a towel and then inadvertently shows us his arse. Ordinarily such behaviour would garner a five-star review from me but it feels a little off. I think Flintoff, who is like a very English Greek god, is weeing himself and displaying his arse to seem more relatable to us, the common folk, watching at home in our hovels. He assumes we are perpetually weeing on ourselves and showing our arses. That might be true, Flintoff, but we don’t like handsome quidditch players rubbing it in.

One way or another, Top Gear isn’t quite working. McGuinness, Flintoff and Harris still feel like they’re on an awkward team building weekend, whereas with the more iconic iteration you genuinely believed that May and Hammond’s families had lived on Clarkson’s estate for generations and that he had power of life and death over them.

Top Gear was never really meant to be a flagship show. That happened by accident in the Clarkson era. It should really be a consumer motoring review aired on BBC2 at 7.30 of a weekday evening. I suspect the only way the BBC could ever really hope to be successful with this title is to revert to that modest form, hire some no-nonsense car reviewers from a magazine and then slowly rebuild it from gentle bants to problematic shenanigans to inevitable ignominy once more. As things stand the presenters are just not “bringing it”.

Okay, what does “bringing it” mean?

“They’re not bringing it.”

“Are you going to bring it?”

The members of Little Mix on The Search (and the editor of the Irish Times) are always telling people to “bring it”. This is meant to be motivational. But what is “it”?

Is “it” gusto, stick-to-it-iveness and grit?

Is “it” the articles I’m paid for on time and to wordcount?

Is “it” that feeling I get when I look towards the west and my spirit is crying for leaving?

Is “it” a bottle of Buckfast and twenty Woodbines?

To all the above I say: possibly? Little Mix: the Search (Saturday, Sunday, BBC1) is a show in which the manufactured girl-band are seeking to manufacture a band of their own.

If you’re cynical about such music industry machinations, this means it’s a programme about Frankenstein’s monster’s monster – Frankenstein’s grandmonster, if you like. And yet, it’s surprisingly delightful. The producers have cut all the sad, humiliating bits where deluded people fail, and have stuck with helpful critiques of objectively talented youngsters.

The fact is, the women in Little Mix are funny and kind and seem to actually like each other (and not just in the terrified, traumatised way Hammond and May liked Clarkson). My favourite is Jade, who responds to handsome boys like the lecherous wolf in old Looney Tunes cartoons, her big eyes popping out on stalks and steam coming out of her ears and the words “hubba-hubba!” not far from her lips.

All in all, The Search is almost inspiring. Young people are no doubt forming their own talent show panels in emulation. Of course, it would be cool if they started bands too.