One man’s story of a restored wildwood in Co Wicklow 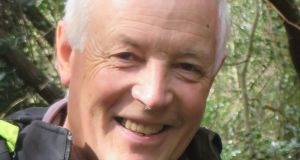 Richard Nairn: his book, Wildwoods, draws from 40 years of experience working as an ecologist

Armchair naturalists will find Wildwoods a welcome portal into a nearly lost habitat. It’s published at a time of renewed closeness to the natural world, whether noticing birdsong when the hum of humans subsides or taking our coffee outdoors to make working from home feel lighter.

We have just spent a socially distant hour among the trees in the company of Molly, the Nairns’ grey-whiskered black Labrador (possibly Ireland’s luckiest dog), who has her own gate built into the fence. Her owner brings two things with him into the woods: a hazel walking stick with a carved ash handle and secateurs in his pocket to tame the bramble shoots on the narrow paths.

Nairn finished writing Wildwoods when the pandemic hit. “Whenever I get fed up with work or world news or my brain gets addled by too many things happening at once,” he writes, “I walk down to the wood and just wrap myself in its embrace. I stand still for a few minutes and feel the peace of the wood, sense its long life and stability, the strength of the old trees and the rejuvenation of new plants growing in the sunlight.”

Nairn spent 40 years working as an ecologist, and the book mixes his field notes with his feelings (he’s a scientist who is quite happy to use the word “magical” to describe woodlands).

He puts this tiny corner of habitat into context in the Irish landscape broadening out the lens to our patchy history with trees leading to new thinking, some of which is very old thinking, on how to farm trees without clear-felling them like fields of tillage crops.

So which came first, the woods or the book? That’s easy. The woods are about 200 years old, he says, “But we bought the land in 2016. And I immediately became fascinated by the ecology and the history of the woods and by their management and the need for a different approach to managing woodlands.”

He invited specialist ecologists to visit the woods near the Devil’s Glen in Wicklow and drew up a basic species list. “Then I realised it was kind of special. The whole community was there, of plants and animals and the more I got to know the woodland the more I learned about it.” He kept a journal recording events.

As we talk Nairn notices disturbed ground on the forest floor, darker soil scraped up from under the confetti of birch seeds, probably a badger searching for the earthworms that make up their staple diet. In September they graze on blackberries, as do the foxes, the blackness and seeds visible in their droppings.

Nairn has captured some of the nocturnal action in the woods with sensor cameras which reveal the pine martens’ activity, the play of badger cubs and the mating of their parents.

“That’s a pine marten nest box,” he says, pointing at a high point on the side of a tall tree. “They like big old rotten trees to nest in. That’s their natural habitat.” The visiting pine martens haven’t nested in it yet but he hopes they might install themselves in the future.

Our walk in the woods is a living illustration of how Wildwoods is not a plea to leave wildness untouched. It is about creating the conditions for native woodlands to regenerate themselves, what’s needed to let these habitats regain a foothold in the landscape. Part of that is about making space.

“We took out some sycamores here,” he explains at the first clearing. “That created a big gap in the canopy. If you look up you’ll see the light coming through.” They planted in some young oaks and then last winter a further 30 oaks he and his wife Wendy have grown from seed. They have established a tree nursery called Natura, growing native trees from wild seed. Their daughter Hazel and her husband Davi run a community supported market garden up the slope from the woods. The regeneration of the woodlands is not the only succession story happening here.

The new young oaks are being nibbled (or browsed) by deer. “They’ll be fine,” Nairn says. “They’ll probably sprout from the bottom. They won’t be fine timber trees but they’ll be fine ecologically because oak probably supports the biggest diversity of insect life and mosses and lichens and all of the typical woodland species,” he says.

Sessile oak has also been found to be more drought resistant than other broadleaf trees. “If we can use native species it’s way better because all of our native wildlife has evolved with them and therefore animals like caterpillars have evolved to feed on oak and birches because they’ve had thousands of years to do that.”

Sycamores, which are non-natives, seed themselves, crowd out other trees and understory growth and host far fewer insects.

Does he visit the woods daily? “Unless there’s a downpour, but I would usually go out after the rain actually to experience the drips and the dampness and also to look for tracks in the muddy paths.”

There are, sadly, what he describes as “tiny fragments” of native woodlands left, “with the exception of the Killarney woodlands, which are the biggest single area of native woodlands and which are protected in the national park. Most of the patches are just as small as this, a few hectares and a lot of it has been neglected, not really managed. And a lot of them are filled with non-native invasive species like rhododendron, laurel, grey squirrels and the impact of all of those together is to prevent natural regeneration.

“So we have to give them a helping hand, which I guess is what this project is about. It’s trying to introduce management which is sensitive and is trying to reverse some of the neglect and damage that we’ve done to nature over the centuries.”

The book is divided into the four seasons. Why did he start in winter?

“For all trees the growing season is spring, summer and autumn. If you were to look at the rings on a tree stump they’re alternately light and dark,” Nairn explains. The darker outline means you can count a year’s growth.

“It slows down in autumn and you get this dark band of denser wood which is slow growing. And then it stops for winter so that’s why we get these annual rings. The tree goes into a sort of dormant period from October to February. It’s a period when the trees are asleep, still alive but they’re not growing. It makes sense to start in the quiet time.”

Some of the trees here will not put on many more annual rings. Several old ashes are looking like winter trees in early autumn, suffering from ash dieback which is quietly and effectively killing millions of trees across Ireland.

“That’s going to be a skeleton very soon,” he says.

Studies have shown ash trees are hosts to up to 1,000 different species from lichens to moths.

Working with coppicing expert Mike Carswell they have coppiced a large hazel tree in the middle of another clearing. The main trunk is cut to near the ground and thicker stems have been left attached at its base and splayed out around the mother trunk like the legs of a spider. Where these have contact with the soil roots form and new hazel shoots grow from the top. It’s a regenerative way to harvest timber indefinitely from a single tree.

His working life spent trying to protect nature coincides with a time in human history when most harm has been done to it. Does that fill him with despair or is there a bleak hope that the wider world is coming around to his point of view?

“I think the encouraging thing is the next generation of people. The young people today are clearly much more in tune with what needs to be done to protect biodiversity in general. By the time they’re in power and making the decisions that matter then we’re on a different trajectory. But unfortunately by that time we’ll have lost so much and climate change will be having such massive effect - look what’s happening on the west coast of America now – that they’ll be struggling to hold onto what’s left and try to restore things.”

He hopes a project like Wildwoods can prompt a “groundswell of public support for tree protection and woodland planting - and I [deliberately] use the word woodland as opposed to forestry. Then that public groundswell will influence politics and votes and laws and regulations and grant schemes. So I guess that’s the overall message: we can do something. It’s not just for birds, or even for our own pleasure, although that’s important. It’s a way of tackling the biggest environmental problem that we all face.”

– Wildwoods: The Magic of Ireland’s Native Woodlands by Richard Nairn is published by Gill Books