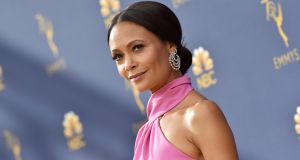 This information will surprise nobody with a sketchy grasp of Hollywood history, but Thandie Newton, the British star of such films as Crash and Beloved, set off a minor earthquake last week by naming some names and confirming some dates. That was brave. But was it wise? Many are the supposedly troublesome women tidied away by an industry that prefers its boats to remain unrocked.

Much of the attention focused on her description of Tom Cruise’s behaviour on Mission: Impossible 2. “I was so scared of Tom,” she told Vulture. “He was a very dominant individual. He tries superhard to be a nice person. But the pressure. He takes on a lot.”

The succeeding story is not quite so horrifying as that opening suggests. Newton explains how Cruise unnerved her by suggesting they swap lines during an on-camera rehearsal, but she seasons the anecdote with qualified affection. “It was a real shame,” she says. “And bless him. And I really do mean bless him, because he was trying his damnedest.”

Newton also restates an old allegation that she had been “groomed and sexually abused” by the Australian director John Duigan when she was 16. What really stands out, however, is a dig at one of Hollywood’s most powerful female executives. The actor explains how this “head of a studio” felt she was unbelievable in the role of a university-educated character. “I went to Cambridge,” Newton replied. “Yeah but you’re different,” the executive hit back before “reeling off these stereotypes of how to be more convincing as a Black character”. Then she names the name. “That was Amy Pascal, ” Newton says. (“I have no recollection of the events she describes,” Pascal subsequently responded.)

Newton has never been reticent in conversation, but the Vulture piece reads like the utterances of a woman with no fear. “If you’re a young Black girl and you get raped, in the film business, no one’s going to f**king care,” she says. She describes uncomfortable experiences on Crash.

Convened to promote the HBO series, Westworld, for which Newton won an Emmy, the interview has already become a manifesto of resistance. It’s not unusual for movie stars to mouth off about controversial issues. When I tentatively asked Susan Sarandon about Hillary Clinton in 2016, the rest of the interview was lost to a catalogue of that politician’s perceived infelicities. “People aren’t very knowledgeable,” she said. “If you point out policy problems or her record you are considered to be bashing a woman. I see that as very sexist.” But, for all her power, Hillary is not a player in the movie business. That bitten hand had never fed Susan Sarandon. In contrast, Amy Pascal is still about. Just this year she received an Oscar nomination for Little Women.

There are dangers. The Newton Manifesto arrived a week or so after Olivia de Havilland, last surviving superstar of the inter-war years, celebrated her 104th birthday. In 1943, the star of The Heiress, and Gone with the Wind filed suit against Warner Brothers for what she saw as an unfair attempt to extend her contract. Bette Davis had tried something similar in the 1930s, but was rebuffed by the court after Warners’ barrister described her as “rather a naughty young lady … [who wants] more money”. (Bette Davis!) De Havilland won her case, but was shut out of studio work for the next two years. You take these people on at your peril.

“Cancellation” (as we now call it) has an up-and-down history in Hollywood. It reached its peak during the McCarthyite witchhunts of the 1950s, but, once that poison was bled out, the industry returned to naked worship of mammon. It doesn’t matter how often Mel Gibson says something unlovely. If he continues to sell tickets, then he will continue to appear in movies.

Something seemed to change (stress “seemed”) with the #MeToo campaign in 2017. Implicated actors such as Kevin Spacey really have been dispatched to the darkest corners. That shift also opened up space for whistleblowers such as Ashley Judd and Romola Garai. It is unlikely that, following her bracing comments, Newton will be reduced to playing Dick Whittington at the Swansea Grand. Too many eyes are watching the gatekeepers. Too many commentators have experienced the toxicity she describes. More than a few producers will want to show conspicuous support.

“Living well is the best revenge,” George Herbert wrote in 1640. De Havilland know that; 77 years after her triumph, she could toast her long-deceased antagonists as she entered her 105th year. Let’s hope Newton can do the same in 2086.