A hidden danger threatening us all? Steven Spielberg’s 1975 hit is unnervingly topical 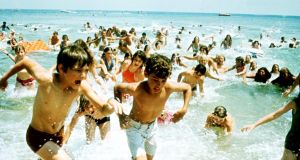 ‘Everybody out of the water’: swimmers run to safety in Jaws

The shark was right. With apologies to the skinny-dipper chomped in half, the shark was only being a shark and its teeth were so very sharp, her flesh so very tender. And given the harm we’ve inflicted on the planet, didn’t we deserve some punishment? When the great beast swam out of the unfathomable waters and on to screens in the summer of 1975, it stirred up anxiety that was doubtless tinged with guilt. “See it before you go swimming,” the trailer warned, tapping into our worries while making the case for moviegoing. We had many reasons to hide in the dark.

The wave-making Leviathan of summer blockbusters, Jaws changed the way Hollywood did business and how people went to movies. It also changed some people’s relationship to the ocean. “You wouldn’t go into the water,” my sister recently reminded me, when I asked about a 1970s family trip to Martha’s Vineyard, the island that sits just south of Cape Cod, in Massachusetts, where much of the film was shot. To be fair, I was a New York kid and could barely dog paddle. My natural habitat was a movie theatre. And it remained so until coronavirus closed cinemas and made me wonder if I’d ever again sit in the dark with strangers. If the ocean now seems far safer, it’s because today the monster is the virus.

That the mayor in Jaws has become a pandemic meme is a testament to the film’s unnerving topicality and our habit of viewing the world through a screen. Played with a perfect mix of huckster smarm and cluelessness by Murray Hamilton, Mayor Vaughn is the blank, smiling face of Amity, the fictional beach paradise that the great white shark turns into a snack bar. After the remains of a woman wash up, Chief Brody (Roy Scheider) goes into overdrive as the mayor insists that everything’s fine. “It’s a beautiful day,” he tells a reporter before the water turns red again. “The beaches are open and people are having a wonderful time.”

Like a lot of politicians, Mayor Vaughn survived repeated crises (he’s in the risible Jaws 2), and now he has a parody Twitter account, the source of a stream of bleakly funny and queasy commentary: “In Amity,” he tweeted on May 17th, “we have germ spotters strategically placed on the beach.” That’s more reassuring than much of the advice dispensed by authorities who focus on putting out fires while ignoring the larger crisis of climate change and its relationship to the current pandemic. “We drain the world’s biological basins of the diversity that would ordinarily keep contagions in check,” Ferris Jabr wrote in the New York Times magazine. “Other animals’ diseases have not so much leapt onto us as flowed into us through channels we supplied.”

Steven Spielberg was 27 when he directed Jaws and already under contract at Universal. He had some qualms about turning Peter Benchley’s novel into a film, having made Duel, a thriller starring a big-rig stalker. He didn’t want to become “a shark-and-truck director”, as he memorably put it. What drew him to the project was the book’s final 120 pages, as he explained back then, when the main characters “go on a hunt, a sea hunt for the great white shark”. So, working with Benchley and others, Spielberg pared down the story to focus on the drama of men battling an enormous shark.

In Amity we have germ spotters strategically placed on the beach. We also have added sanitizing machines where the life guard stands used to be. Clean and safe without taking away bather freedoms here! https://t.co/EuFxd4Z4wR

Subplots were deleted and new scenes added. With a potential actors’ strike looming, the film was rushed into production. There were lots of bumps and some publicly aired grievances. Spielberg, Benchley said, “has no knowledge of reality but movies”, a criticism that long clung to the film-maker. Benchley shared screenwriting credit with Carl Gottlieb, who also plays the toadying publisher of the Amity newspaper. Gottlieb amusingly details the making of the movie in his essential account, The Jaws Log.

Spielberg knew what he had. Mid-production, he said, “We’ve really, I think, made a better movie than Jaws is a book.” He was right: the film is as lean and clean as a denuded bone. Like the novel, it opens with the death of the skinny-dipper. Her name, you may recall though maybe not, is Chrissie. Women don’t factor much here; one becomes dinner, another fusses in a kitchen. A crucial exception is the mother, Mrs Kintner (Lee Fierro), who confronts Brody the day she buries her child. “You knew there was a shark out there,” she says, after slapping him. “You knew it was dangerous but you let people go swimming anyway. You knew all those things. But still my boy is dead now.”

After Fierro died, in April, from complications of Covid-19, the Los Angeles Times columnist Mary McNamara wrote, “We are all Mrs Kintner now.” These days, though, we are all more like the confused people of Amity who either recklessly rush into the water or stay away at a safe distance, watching in horror. Jaws is about a lot of things, including fear, death, science, accountability and the necessity – and fragility – of social solidarity. It’s about knowledge and what people do with it. Brody grasps that there’s a danger threatening Amity and its visitors and sets out to save them with help from a scientist (Richard Dreyfuss) and a fisherman (Robert Shaw). Movies love the romance of the white-hatted hero, but in real life we also need to save ourselves.

Gottlieb writes that after a triumphant sneak preview of Jaws in March 1975, a few months before it opened, he observed Universal suits convene in a cinema bathroom and change industry history. Before Jaws, studios generally opened their better films in limited cinemas, slowly rolling them in a so-called platform release. In that bathroom, though, Gottlieb recounts, the studio brass decided to flood cinemas, putting the movie in more than 450 North American theatres. That’s modest compared with today’s event openings, but then it was a seismic shift. With its wide mouth and release, its saturation advertising and June 20th opening date, Jaws created the summer-blockbuster template.

It was, yes, a monster hit. For some critics, though, Jaws itself has always been monstrous, the first of two widely popular films that together ended the creatively fecund days of 1970s American cinema. The second, bigger blow was delivered two years later by Spielberg’s friend George Lucas, and the release of Star Wars. That’s one take, at any rate, although the era and history are considerably more complicated and the films more diverse than 1970s fetishists sometimes remember. There was plenty of junk before Jaws, and two of the box-office hits were The Towering Inferno and Earthquake, disaster movies bloated with stars and special effects.

These big-ticket spectacles hewed to the usual time-tested Hollywood script. The most haunting films of the era’s catastrophe cinema were grimmer, though, and few were as uncompromisingly bleak as Soylent Green (1973), about Earth at the edge of collapse. In it, the natural world has been decimated and human overpopulation has made resources terrifyingly scarce. In one scene an old man (Edward G Robinson) says farewell via state-sanctioned assisted suicide. As he fades away alone in an antiseptic room, he watches a big screen filled with images of the now-lost world: animals, trees, the watery deep.

It’s a scene very much calibrated to growing consciousness about the environment. In the introduction to the 30th-anniversary edition of his bestseller, Benchley sounds defensive about his own awareness back then: “At the time I was writing Jaws, the environmental movement we know today didn’t exist.” Yet one did exist. The first Earth Day took place in 1970 (it was celebrated by Sesame Street), and the US marine-protection, research and sanctuaries Act was passed two years later. To his credit, Benchley became a conservationist, and there’s even a lantern shark named after him, the Etmopterus benchleyi. “I could never write Jaws today,” Benchley ceded.

In the decades since the film freaked us out, Hollywood has grown increasingly dependent on blockbusters. Yet even as its movies have grown bigger and shinier, they have become less tethered to real people and our scarily imperilled world. Critics read Jaws different ways: as a take on Moby-Dick or the Vietnam War, or as a tale about the return of the repressed. Of course it is also about a shark that kills people and is killed in turn, which makes it another story about humankind’s domination of nature. If the threats on screen now are often extraterrestrial, it’s partly, I think, because we can’t bear to see what’s happening, what we’re doing, on Earth. Maybe the shark wasn’t simply hunting us – not all of us, anyway. Maybe it was warning us. – New York Times