Struggling artists: Trying to 'justify yourself' is humiliating 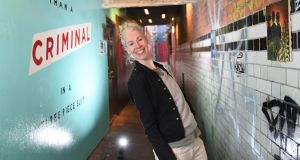 Mia Gallagher: the novelist signed on the dole a number of times in the 1990s, between periods of full-time employment. Photograph: Clodagh Kilcoyne

“I realised how much scurrying you were supposed to do,” Mia Gallagher says, recalling the times she signed on for unemployment assistance while seeking to make her way as a writer in the 1990s.

When Gallagher’s second novel, Beautiful Pictures of the Lost Homeland, was published to widespread critical acclaim last year, she wrote an article for The Irish Times describing the 12-year process of writing, rewriting, researching and editing that had gone into its making. Gallagher hadn’t sought to claim jobseeker’s allowance during any of those years, but there were times before that when she felt she had to.

She’s not alone. Unwittingly and often unwillingly, the State has supported artists financially for decades through unemployment assistance. Countless struggling musicians, painters, writers and film-makers signed on while pursuing their vocations. Gallagher’s experience of intermittent employment with arts organisations, doing her own work as a performer and writer, working in new media, teaching and finding other ways to make ends meet is not untypical. Ingenuity and determination, as well as talent, are prerequisites if you’re going to survive.

The problem is that the social-welfare system is geared to providing a financial safety net for unemployed people and a springboard towards securing permanent jobs for them. Until now the Department of Social Protection has been oblivious to the fact that some people may choose to work in precarious, unpredictable creative roles, with huge fluctuations in income and opportunity from one year to another. Although other government departments recognise the value of such creative work, the realities of working as an artist have been ignored in this particular area.

Gallagher signed on the dole a number of times in the 1990s, between periods of full-time employment. “There’s a humiliation involved in trying to justify yourself,” she says. “I felt infantilised and that my contribution as an artist wasn’t being valued. I have a strong work ethic. I make my contribution.”

She believes that the experience can be debilitating and detrimental to some people’s artistic work.

The new pilot scheme announced on Monday by Leo Varadkar and Heather Humphreys recognises for the first time that artists’ incomes do not follow the same patterns as most people’s. That artists can now be defined as self-employed but still be eligible for jobseeker’s allowance is the most significant change.

“There can be years when things are really, really tight,” says Gallagher, who acknowledges the support she receives for her work from the Arts Council and through the artists’ tax-exemption scheme. She is currently working on a book of short stories. “I’m glad I’m not someone who’s been forced to lie.”

The general expectation is that the pilot scheme will cost little, but Gallagher also thinks it may provide useful insights into how artists go about their work. “Anything that brings a bit more honesty to the process is good,” she says.