Difficult second novel? Mia Gallagher on 12 years it took for follow-up to HellFire

After the first hard cut, everything got easier. I still had tons of work to do but the first cut, by removing certain possibilities, let me see other, more interesting ones 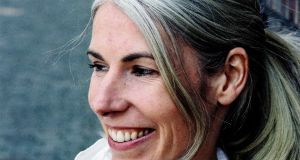 Mia Gallagher: Far from meeting the world as a precocious toddler, my second novel has slouched out in its own good time, recalcitrant as a sleep-deprived teenager

Late in 2004, I started my second novel. Unlike HellFire (my debut, originally supposed to be a play), I knew I wanted to write the next piece as a novel. I was convinced it would be easier this time round. The new book would be shorter, I wouldn’t need to do so much research, I’d already written the story I was basing it on. I’d also be far more on top of the process, having a finished novel under my belt. I pictured my new manuscript gently swelling out from the initial idea, ripening like a fruit on a branch. In my mind’s eye, I gave myself a year to write it.

I was wrong, on all fronts. Beautiful Pictures of the Lost Homeland is shorter than HellFire, but not much. I didn’t finish my first proper draft until six years after I started, and it’s taken a further five-and-a-half to reach the bookshelves. Far from meeting the world as a precocious toddler, my second novel has slouched out in its own good time, recalcitrant as a sleep-deprived teenager.

How did this happen? As that first year turned into years, the word wrong kept flashing up in my awareness. I, my story, my characters, my writing, my approach, the very idea I could even write another novel – were all wrong. Otherwise, whispered the devil on my shoulder, you’d have the book finished by now, Mia.

Gilbert and George once said something about how, if you want to make art, you need to free yourself of artistic thought. What I think this means is: don’t have too many ideas about the work you’re going to make – especially about it being “good”, or “important”, or “beautiful”, or even “finished”. Just try to make the damn thing. This feels like sound advice. Now, 12 years on, as Beautiful Pictures is about to launch, I see how I punished myself back then with the thought of getting the work “done”. And yet… there was still something in the back of my mind that kept me going. If that isn’t “artistic thought”, what is it?

I’d begun the novel by writing in longhand one to two hours a day, using the initial story (an Irish au pair coming of age of in 1980s Germany) as a springboard. The longhand process had worked well for HellFire and started to yield results with this book too. Unfortunately, they weren’t the results I wanted. My protagonist, Georgie, refused to open herself up to me about her au pairing experiences. Instead she kept drawing me back into her childhood: her strange, removed father, David, her sick mother, Aisling, a mysterious exotic woman called Lotte who’d prompted her to go to Germany. I hadn’t wanted to write about Ireland, or the seventies. I’d done that with HellFire. I was only writing this stuff now because I kept slipping off the au pair story. I certainly didn’t think it was interesting.

By January 2005, I’d brought Georgie up to the age of 13 and had 200 closely written pages of longhand. The material was inchoate, scrappy. I had next to nothing around my original story, and only a tiny bit of that in Georgie’s voice. But I had enough words for a short novel. It was time to move to the PC, I decided, and start editing.

I’ve been editing since I was a kid. My mum, Miriam, is a playwright and from time to time she’d grant me the privilege of being her sounding board. It’s a position of trust. I love working with other writers, feeling for the story they want to tell. I’m fascinated by those constant little miscommunications. Oh, so that’s what you meant by that? Huh! Interesting. It’s so much harder to self-edit, offer the same generosity to my own inner writer.

In 2005, as I worked on the PC, my new novel – could I even call it that anymore? – started growing more ugly, unlooked-for protuberances. It was turning into a Frankenstein’s monster. David’s childhood generated a sequence of sharp, angry chapters. Lotte’s ethnicity bothered me; she came across as English, said she was from Czechoslovakia, but I knew she was German. I had no idea how this could be and didn’t want to find out. It was off the point. I wrote a bit around her mother “Julia”, who I felt was hiding something, maybe to do with World War II. Meanwhile, Georgie had grown into a fortysomething, with no explanation of what had happened to her since her teens. She called herself Georgia now and felt very different to little Georgie, though I knew they were the same person. I kept writing this, over and over, but I couldn’t understand what it meant.

In 2007, almost three years after starting, I returned to my original story and got some interesting stuff out – 200 more pages of longhand. Instead of cohering, though, it seemed to be pulling even further away from everything else. In early 2008, I made my first radical decision. I cut the original au pair story out from all the material that had mushroomed around it. Then I forced myself to read through my Georgie pages, slowly. A light-bulb went on.

In TV, an editor’s cut both separates and binds. During the early stages of trying to write HellFire, I had the good fortune to be mentored by playwright and dramaturg Jocelyn Clarke. Your problem, he said, is you’re not making any decisions. After the first hard cut on Beautiful Pictures, everything got easier. I still had tons of work to do: years more research, writing, rewriting and thinking. But the first cut, by removing certain possibilities, let me see other, more interesting ones. Cutting freed me of that nagging, pernicious “artistic” thought – the seductive image of a finished manuscript on my agent’s desk. Once that happened, I could get out of my own way and get on with the practical work of making the book. I could begin to identify the questions the material was really asking me and go in search of answers. And that, finally, felt right.

Beautiful Pictures of the Lost Homeland is published by New Island and launched tonight by Anne Gildea at Hodges Figgis, Dawson Street, Dublin 2. Sara Baume will review it for The Irish Times later this month.