Bloomsday Festival: What’s happening on the big week for Joyceans 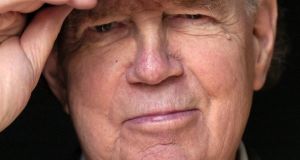 There’s a celebration of Bloomsday co-founder, the late Anthony Cronin, on June 16th

Bloomsday is fast becoming Bloomsweek, with a plethora of events taking place under the banner of the Bloomsday Festival, which runs from June 11th to 16th, many already sold out. Highlights include Geoff Dyer in conversation with Mark O’Connell on June 13th; Ruth Gilligan, Michael O’Loughlin and Dermot Bolger in conversation on June 15th; and a celebration of Bloomsday co-founder, the late Anthony Cronin, on June 16th.

A new recording of the Anna Livia section of James Joyce’s Finnegans Wake by celebrated Joycean performer David Norris has been launched in time for Bloomsday next Friday (June 16th). Broadcast and recorded for German public radio in 2014, the recording displays the full gamut of Norris’s vocal talents – and his command of Dublin expression – as he evokes the two washerwomen whose “chattering dialogue” across the river Liffey tells the story of Anna Livia herself, on her progress from “a young slim slip of a thing” as she begins life in the Wicklow mountains and eventually, as night falls, flows into the Irish Sea. The CD is available from the James Joyce Centre Dublin and other outlets (jamesjoyce.ie).

The Third Annual Bloomsday at DeBarra’s celebration in Clonakilty will take place on Friday, June 16th. Everyone is invited to meet up at Clonakilty Post Office at noon to walk the not so long or winding route to DeBarra’s in a small re-enactment of the great voyage of Leopold Bloom across Dublin. Phillip Joyce, the great grand nephew of James Joyce, will regale the audience with stories and anecdotes from his family history.

The Flaggy Shore, the magical stretch of coastline in Co Clare which features in Seamus Heaney’s poem Postscript, will be celebrated with a unique combination of words, live artwork and traditional music at Seamus Heaney Home Place on Saturday June 10th. Environmentalist, teacher and painter Gordon D’Arcy will be followed by musicians Katie Theasby, Conor Keane and Brian Murray.

Bernard O’Donoghue, Emeritus Fellow, Wadham College, Oxford and one of Ireland’s leading poets, delivers the annual Joseph Hassett Yeats Lecture on the subject of Yeats the Political Mystic at the National Library of Ireland next Tuesday, June 13th, at 7pm.

William Heinemann to publish a graphic novel adaptation of Harper Lee’s To Kill a Mockingbird in November next year. The illustrator is Londoner Fred Fordham who illustrated Philip Pullman’s debut graphic novel, The Adventures of John Blake: Mystery of the Ghost Ship.

Ian McEwan will be flavour of the month this autumn, with a BBC TV adaptation of his troubling novel A Child in Time, starring Benedict Cumberbatch, set to air in September, followed in October by a film adaptation of The Children Act, starring Emma Thompson.