Provisionals and dissidents, in their own words 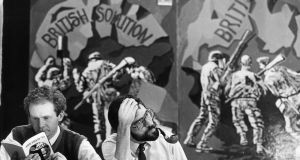 In January 1984, I left the United States for Ireland to find out why people joined the Provisional IRA and Sinn Féin.  Over the course of the year I met some very interesting people.  Joe Cahill, in the Sinn Féin Head Office, was especially helpful.  I’ll always remember John Joe McGirl saying to me, “If Joe says you’re okay, you’re okay”.  I spent almost an entire day with Ruairí Ó Brádaigh who then, in order to get his exercise, walked with me to the train station in Roscommon; presumably my questions were a welcome relief as he recovered from a horrible automobile accident.  The RUC attack on the anti-internment march in Belfast that summer was an eye-opening experience.  Gerry Adams’s introduction of Martin Galvin gave the crowd a flash of his charisma; the RUC killed John Downes with a plastic bullet.

My questions were straightforward but the answers, as laid out in Out of the Ashes: An Oral History of the Provisional Irish Republican Movement (Merrion Press), were complex.  Joe Cahill joined because of a family connection, “Both my father and mother had been involved one way or another in the Republican Movement.” Some joined simply because their friends joined while other joined because they believed Northern Ireland was beyond reform and their best political option was to pursue a united Ireland through armed struggle.

From the start my approach has been to avoid condemning or praising the Provisionals, I am an objective, social scientist, observer.  In my experience, condemning the Provisionals (or Al Qaeda, ETA, Hamas, etc.) as “terrorists” really doesn’t do much more than make the person doing the condemning feel good and lead the person being condemned to point out the hypocrisy associated with the label “terrorist”.  A respondent commented:

… they ruled Ireland with a mailed fist – literally – a grasp of iron and nobody stepped out of line. And it’s only natural that a people are going to breed at some stage someone who says, “I am not going to take that.” Now what does that make him? Does that make him a rabble-rouser? Does it make him a troublemaker? It ought to. Obviously if he stands up and hits back it makes him a combatant. A combatant, right? And it makes him, therefore, eventually a murderer and a terrorist. And if that’s what a terrorist is, I want to be a terrorist.

The United Kingdom and United States governments have killed a lot more people using violence for political ends than the Provisionals ever did.  Consider Winston Churchill’s wartime order to bomb German cities or George W Bush’s order to give Iraq the “shock and awe” treatment.

If we truly want a peaceful world, we have to recognize that a government’s response to unrest will influence the decisions that people make.  Internment and Bloody Sunday turned a small-scale insurgency into a rebellion that lasted a quarter of a century.  The best approach to understanding how Bloody Sunday or the 1981 hunger strike influenced the Provisionals is to talk to people who experienced those events.  Out of the Ashes presents the oral histories of the middle-aged men who created the Provisional IRA in 1969 and “Provisional” Sinn Féin in 1970 along with the oral histories of the younger men and women who transformed the Provisionals into a fully constitutional political party.  Like them or hate them, the transformation of the Provisionals is an important story for understanding contemporary Irish politics.

It has been an interesting journey.  At the 1984 Sinn Féin Ard Fheis, Martin McGuinness took personally a motion suggesting the leadership was going soft and made very clear his commitment to armed struggle.  I remember turning to the person next to me and making a quip along the lines of, “How could anyone be worried about Sinn Féin becoming too political with that guy up there”.  And yet, in a 1991 interview, McGuinness commented:

I joined the movement in late 1970… many of us came into a movement which had many of its policies and attitudes already firmly established by previous generations. …  I think that all of us, including many of those people themselves, recognized and understood that our politics had to evolve, that our politics, our attitudes, had, at times – certainly not our principles but our attitudes – had to change to meet the circumstances which we were faced with.

Decades later, I was found myself watching Deputy First Minister Martin McGuinness, dressed in a suit and tie and with a big friendly smile, having his photo taken with secondary school students in the Great Hall at Stormont.

Out of the Ashes may be controversial, but not like Ed Moloney’s Voices From the Grave.  Moloney and his fellow journalists, including Liam Clarke, Kathryn Johnston, David Sharrock and Mark Devenport, have covered much of the “Who was in the IRA?” issue.  Out of the Ashes focuses on why things happened.  What might be controversial is the view that Martin McGuinness, Seán Crowe TD, and Fra McCann MLA, among others, had a legitimate political reason for joining the Provisionals.  What might be more troubling is the inclusion of anti-GFA “dissidents” like Des Dalton and Josephine Hayden. Ruairí Ó Brádaigh, the most senior “dissident” of them all, commented:

The voices of anti-GFA activists are important for understanding how and why people like Martin McGuinness changed but others did not.

Oral histories collected after 2005 offer insight on a variety of issues, including “Who won the war?”  Perhaps most controversial, the accounts show that people joined the Provisionals because they wanted to help build a better Ireland.  This is especially seen in comments from ex-Provisionals who stepped back from activism but remain committed to helping people:

My life experiences have taught me to have empathy for those who, for example, present to me now with health problems. It doesn’t matter which community they come from because I have worked with both and I have worked in London. And I suppose my job has also opened my mind up to all of that. But I think being a republican, and knowing what strife and struggling and suffering is and bereavement and loss and hurt and pain, really empowers me.

Ireland is filled with ex-Provisionals who found jobs as community workers, health service professionals, teachers, and so on.

The Provisionals were not all saints and scholars but they were also not all criminals and thugs as portrayed by some in the media.  Out of the Ashes tells the story of the most important transformation in Irish politics in the last fifty years from the perspective of those who lived it.
Out of The Ashes – An Oral History of the Provisional Irish Republican Movement by Robert W White is published by Merrion Press