The Answers review: Asking the questions about love

Catherine Lacey has a poet’s eye, and pays minute attention to every sentence, every word 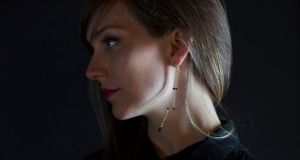 In a small white room in a building in New York, Matheson, an assistant to an actor, asks Mary – separated from her family, single, troubled by phantom pain – why she thinks people pair up. Why do human beings couple off? Mary gives halting answers about freedom and trust. Matheson, in turn, delivers a diatribe which concludes with the line, “the ways in which our culture expresses value and collective sexuality has become, to put it lightly, demented”. It’s hard to argue with him. Welcome to the “Girlfriend Experiment”, Catherine Lacey’s sly, surreal take on love and relationships. Lacey was recently in illustrious company on the Granta “Best of Young American Novelists” list and The Answers, both deeply felt and deliberately elusive, proves she has earned her place.

Mary’s life unfurls not unlike the narrator of Lacey’s striking debut Nobody Is Ever Missing – carefully and well-observed, in breathless, weaving, run-on sentences. The damaged product of a strict, religious upbringing and a childhood under the rule of a maniacal father, Mary is desperate and friendless. Lacey has a poet’s eye, and pays minute attention to every sentence, every word, so it’s natural that some of the strongest sections occur early, when Mary is alone, witnessing a world she never fully inhabits. She moves through New York, “trying to contain myself, to ignore and be ignored in the street. It was what we did here, one of the urban agreements I’d observed, learned, upheld.”

Mary is alienated and easily scared, searching for a replacement for a God she always questioned, ever since childhood. “Like churches,” she thinks, “there should be a place for people who just aren’t sure.” In steps Kurt, an ageing actor with a Messiah complex, who believes, with a dedicated investigative team, “there is a way to decode our disorganised reactions to partnership, the way two people can make each other so tremendously happy at one point only to reach new depths of misery or boredom, only years, weeks, or months later”.

Mary, and the reader, better acclimatise pretty quickly to the weird. Mary is employed as the Emotional Girlfriend (there is also an Anger Girlfriend and an Intimacy Team) and her range of tasks include listening, maintaining eye contact, affirming Kurt’s opinions and offering limited amounts of advice or guidance. She is warned that “crying or telling Kurt that you love him before two months is not acceptable and may or may not result in termination”. If the producers of The Bachelor collectively read Barthes’s A Lover’s Discourse, and had a roundtable discussion about it, The Answers would be the result.

Despite the entertaining premise, and the flashes of humour, Lacey stealthily probes big themes like family and loss. Intelligent, articulate and sure of her gifts, she is in possession of that rare skill – she knows exactly what to leave out. Still, in places, even admirers may find themselves longing for a straight answer and a full stop. Mary is her central, and most fully-realised character, and despite several strong sections, none of the other Girlfriends reach her emotional depth. Kurt, although he pulls the strings, remains unformed, a comment perhaps on the interchangeability of celebrity. As regards the answers about love? There are none. Luckily, Lacey writes about this doubt beautifully. “Such a serious thing we do,” Mary thinks, “and no-one really knows how to do it.”

Nicole Flattery’s fiction and non-fiction has appeared in The Stinging Fly, The Dublin Review and on BBC Radio 4. She is the recipient of The White Review Short Story Prize 2017