Owen Roe: 'How can you study Beckett and not know anything about Laurel and Hardy?' 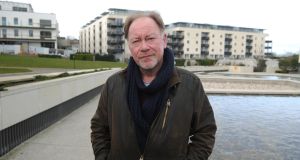 Owen Roe takes his comedy seriously. A few years ago, on tour in the US with the Gate’s production of Endgame, he was aghast to discover during a seminar in the University of Berkeley that none of the students understood an important influence behind his performance of the blind disintegrating tyrant Hamm.

“I said, how can you study Beckett and not know anything about Laurel and Hardy?” he recalls now, with fresh exasperation. Beckett, the master of the mordantly austere, was hardly immune to the charms of slapstick. But not everyone would see all double acts so worthy of study.

Owen Roe is different. Sitting in a bright window of the Royal Marine Hotel, he points out the steps where Stan Laurel and Oliver Hardy posed for a famous photograph during a month-long sojourn in Dublin, in 1953.

As a boy growing up in Dublin in the 60s and 70s, their films were such an indelible education in performance and timing, that Roe will still find, in the supposedly more solemn works of others, appreciation for another fine mess.

“Poor old Beckett has been murdered by so many people who were/are so earnest,” he goes on. “But Endgame is hilarious. Apparently when Patrick McGee was doing Endgame for the first time, Beckett pushed him out on stage and said, ‘Get as many laughs as you can.’” Roe lowers his chin, and looks at me above the rim of his glasses. “Now, that story may be apocryphal…”

It says something about Roe’s approach to his stage work, which now forms a considerable body of haunted figures whose suffering is seldom worn heavily, that it’s no surprise humour comes naturally to him.

“Owen is probably the best craic you can have in a rehearsal room and on stage,” says Cathy Belton, a frequent collaborator. “That is not taking away from his sublime talents, and the dark places he can bring you with the lightest touch.”

Roe’s humour offstage can be elaborately playful: during Tartuffe, the Abbey’s Christmas show in 2000, he installed a Santa’s Grotto in the wings. In the course of an otherwise weary tech rehearsal for Rough Magic’s The Taming of the Shrew, in 2006, his director Lynne Parker was surprised to find Roe apologetically gaffer-taping a fellow cast member to the back of the set. The effect of such winsome mischief, in Belton’s view, is to make it easier for everyone to dig deeper: “It opens you up. It lets things flow. You’re prepared to take more risks when the atmosphere is lightened like that.”

You might say the same for Roe’s career arc thus far, one that began with adventurous fringe theatre and a three-year stint as a stand up comic in the 1980s, progressing through well-received personable roles in all of the main theatres, and which has gathered in complexity ever since. Roe’s career has now come to be defined by deeply affecting interpretations of some of the most totemic roles in the theatrical canon.

Those parts, into which he has grown steadily, include the mercurial, depressed Irishman in Tom Murphy’s The Gigli Concert, in the Abbey’s staging in 2000; the raging, tragic protagonist of Titus Andronicus in Selina Cartmell’s extraordinary 2005 production; a haunted Frank Hardy in the Gate’s hypnotic 2009 production of Brian Friel’s Faith Healer; a howling King Lear in the Abbey’s 2013 production; and, more recently, the distressed, dementing André in Florian Zeller’s The Father.

All of which makes Roe’s response to being named the recipient of this year’s Special Tribute Award at the 22nd Irish Times Irish Theatre Awards rather surprising: what has he ever done to deserve it?

“I’m obviously very appreciative of it,” he says. “It’s lovely. But I feel like I haven’t started yet. I haven’t got going.”

Recently, though, Roe has had reason to reflect. He turns 60 this year, marking his 40th year as a professional actor, having come of age professionally in the unpromising 1980s. “We made a lot of big mistakes in small venues,” he says of his first company, the experimental Reckless, formed with fellow graduates of the Brendan Smith Academy. “Which is very good for you.”

His next company, Wet Paint, delivered his big break, though, staging Dermot Bolger’s debut play, the groundbreaking The Lament for Arthur Cleary, a fierce critique of 1980s Ireland.

“It was like a showcase for me,” Roe remembers. “I was playing three or four different characters. And the play itself had quite an impact.” Ironically, while the play remonstrated against the pressures behind emigration, the 1980s proved a fertile time for Irish theatre for similar reasons. “It was a very exciting time,” Roe says. “There seem to be a lot of anger, and it was vented in a very articulate way... It’s there again, at the moment, in some ways”.

Roe also turned his hand to playwriting, with Fear of Feathers in 1991, a play for six women, which won the Stewart Parker Award. He may return to writing one day – he has a few ideas – but his wife, the actor and novelist Michèle Forbes, is the writer in his house.

Roe speaks reverently of having other playwrights in the rehearsal room such as Bolger, Friel, Marina Carr and Murphy. “When I was doing Faith Healer, there were things that just went right over my head,” he says. “And Brian pointed them out. It would just be a simple change of emphasis and you’d go, ‘Jesus! Everything changes’. That was invaluable.”

In rehearsals for The Gigli Concert, Murphy drew Roe’s attention to an otherwise innocuous word - “and” – repeated with an almost unbearable escalation through one resentful, self-loathing speech from the Irishman. “I was just throwing the word away. Tom would say, ‘No no no. This is a man trying to repress tears, pushing this “and“ up a hill, let it build up inside you.’”

In performance, that was as transporting and affecting as music. “Moments are so important to me,” agrees Roe, who likes to discover them in rehearsals. “And so often you just see them being pissed away. Either because they’re not allowed to happen or the rehearsals didn’t create an environment where you could go, ‘Wait a minute. What if I did this?’”

To think about Roe’s performances is to be presented with a cascade of moments: The middle aged man in Hilary Fannin’s Doldrum Bay who arrives to the stage with a cheap electric guitar, shreds out a few chords, and then beams out to the audience, “I’m depressed!” The gombeen misogynist Petruchio in Rough Magic’s The Taming of the Shrew who strode so confidently across the stage in a pair of livid green y-fronts. The bewildered André, in The Father, clasping his hands aristocratically behind his back while studying his bookshelf, patently unaware of who his visitor was.

For the latter, Roe drew from his experience with his mother, alternately aggressive or lucid as she struggled with dementia for eight years. She died in 2013, while Roe was rehearsing King Lear, and the grief and confusion infused his performance. “I felt almost guilty, that I was taking these things from her,” he says. “At the same time, why not? I was trying to be as authentic as possible.”

Exposure, to some degree, is the prerogative of an actor, and humour a necessary deflection. “I don’t believe in characters unless there is a moment of vulnerability,” Roe explains. “I don’t play heroes. I wouldn’t know how! I guess there’s that whole macho thing, of control, which I rail against.”

For that reason his Francis Hardy, perhaps the first to truly come out of the shadow of Donal McCann’s original performance, was intentionally a less menacing figure and someone more troubled, more complex.

“I just like the fact that somebody comes on stage and they’re not in control, even though they try to be, whether it is poor old André or even Claudius.” (He is also nominated this year for Best Actor for playing Hamlet’s adversary in the Gate’s recent production.) “I always look for the chinks in the armour.”

Like those students of Beckett unfamiliar with Laurel and Hardy, the connection between vulnerability and humour may not be obvious to the outside observer. But in Roe they both communicate an immediate sense of humanity.