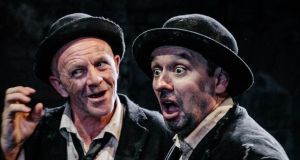 Waiting for Godot is at Smock Alley theatre until August 10th.

Smock Alley, Dublin. Ends August 10th, 7.30pm (Sat mat 2.30pm) smockalley.com“I can’t go on like this,” says Gogo. “That’s what you think,” comes Didi’s reply. It’s been the same exchange, pivoting between defeat and grim determination, since 1953, when Samuel Beckett first sent shockwaves through the theatre and two downtrodden men with an endlessly deferred appointment offered us a paradoxical model of the human struggle: they keep going by staying put.

Smock Alley’s production, first staged in 2014 and revived again for a summer audience (it might help that Druid’s astonishing production is now safely out of the picture), has treated the play as a performance vehicle in the past on a set that is sparing even by Beckettian standards. That can make Didi and Gogo seem curiously competitive on the stage when they have always resembled two sides to the same person on the page: the hungry, hurt Gogo marked out as a creature of the senses, the philosophising, planning Didi more an emblem of the mind.

Charlie Hughes brings a Donald O’Connor-style naivety and some of Stan Laurel’s slow-blinking incomprehension to Vladimir, most affectingly when he contemplates the tragedy of their lives going unwitnessed. That has never been Didi and Gogo’s problem. They’re not going anywhere

Where do love and hope ultimately come from?
7

The Turning: This film is a total waste of time. Don’t even read the review
9