Redemption Falls review: A story and ensemble not to be missed

An unpredictable, captivating tale of redemption and revenge 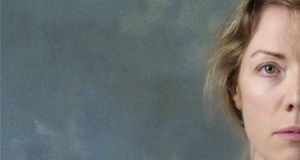 Following Moonfish’s success with Star of The Sea in 2014, Redemption Falls is one of the most eagerly awaited shows of this year’s Galway International Arts Festival. Once again, the company draw from author Joseph O’Connor, imbibing his text with their trademark folk-theatre influence.

The production itself is based on O’Connor’s novel of the same name and overlays a patchwork of Irish histories across the events of the American civil war. Moonfish focus on the journey of Jeddo and his sister Eliza. This talented ensemble of performers and musicians guides the audience on a journey of discovery, redemption and revenge. Eliza has walked for years to find her brother Jeddo, a child soldier of the civil war. Will she find him?

The music, which draws from old folk melodies and O’Connor’s text, traces the stories of the play’s multitude of characters. It is equal-parts entertaining, evocative, and moving. Even several anachronistic moves from folk to rock music work well in this context. The musical fusion delivers a cacophony of melodies and cadences, conjuring an expanse of individual histories.

Initially, the set looks more appropriate for a music gig than a theatre show. This too is fitting. Lian Bell’s geometric scrims and functional, yet symbolic, props signal at the theatricality to come. The design is also about fusion and outmoded mechanics give way to contemporary video display and projection. The set creates intimacy, guiding the audience’s gaze. It befits a theatrical retelling of O’Connor’s story and marks this as much more than an adaption.

There is an intentional distancing achieved in this production between the audience and the characters. This distance allows the audience to observe the intricacies of the relationships represented onstage. Furthermore, this production does not attempt to re-present O’Connor’s novel on stage. It stands alone as its own celebration of the world O’Connor has created, but it moves it into another sphere.

This is achieved in the synergy between performance and design. The brutality of Eliza and Jeddo’s journeys are accentuated by Bell’s set choices. The colour scape, echoed in Cherie White’s costume design, is a kaleidoscope of primary and stone colours. The colour red features everywhere and is a convincing omen for what is to come. At one point a violin is used as a redolent representation of sexual violence. It is an unforgettable moment.

This is a tale of the possibility of redemption, but also the shameful sweetness of revenge. It is unpredictable and it is captivating. It is not to be missed.

At the Galway International Arts Festival until July 28th and at Dublin Theatre Festival and The Abbey Theatre from October 9th-19th. moonfishtheatre.com