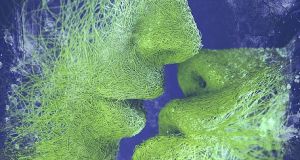 These Stupid Things: As the characters’ desire for each other flickers and flares, will their own judgement become clouded by emotion?

These Stupid Things
Smock Alley Theatre, Dublin, ends Jul 21, 7.30pm (Sat & Sun mat 2pm)
You live in the information age, your phone is smart, your data is everywhere. So, how wise are your choices? That is the brainteaser behind Hugh Travers’s new play for White Label, which takes the form of a scripted performance but involves a series of experiments involving the audience. The excellent Rachel O’Byrne and Ian Toner (currently, and hilariously, attached to George Clooney’s hip in Catch-22) play two doctors working to save lives by seeking to improve the decision-making of their colleagues. But as their desire for each other flickers and flares, will their own judgement become clouded by emotion?

Travers, a playwright and screenwriter, has taken witty and intelligent approaches to human nature before, playfully exploring a self-mythologising stunt by Gerry Ryan in LAMBO and persuasively presenting it as a pivot point in Irish culture. Here, in a piece that combines science, psychology and storytelling, directed by Sarah Baxter, he depicts the thin divide between logic and intuition in everyone’s makeup. That all makes for a promising experience. Call it a hunch.

Cleft
O’Donoghue Theatre, NUI Galway, Jul 22-27 6pm (Thurs & Sat mat 2pm)
In theatre, “family drama” is an all-encompassing genre, but every family has its own distinct kind of drama. In Cleft, the second stage play by Fergal McElherron, an actor and writer, that family is a resilient and unconventional unit, where twin sisters Fea and Caireen raise a young boy together on a harsh, remote island. Abandoned by their own mother at a young age, and left to fend for themselves in their teens by a troubled father, self-sufficiency is ingrained in their psyches. When the boy begins to resemble his father, buried beneath the hawthorn tree, a rift opens between them.

Co-produced by Glór and Rough Magic Theatre Company, and destined for both the Galway International Arts Festival and Kilkenny Arts Festival, Cleft takes a dark, funny, folkloric look at people guided by their instincts. Lynne Parker directs Simone Kirby and Penny Layden in this family drama, or, perhaps, this matter of survival.