The Bodyguard: Even if you’re not fan of Whitney, you can’t beat her songs 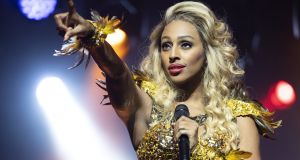 Alexandra Burke says The Bodyguard has been the hardest show of all the musicals she has done.

Stuck in long queues in hot stifling heat does not normally bring out the best in people but this night was different. Thousands were happily lined up wiggling their bodies and swaying their heads in between chatting to whoever was nearby about the two-hour show they’d just watched in an Edinburgh theatre.

Star of The Bodyguard musical Alexandra Burke had brought the crowd of more than 2,500 to their feet for a standing ovation after she sang her powerful rendition of I Will Always Love You, and she kept us on our feet as the rest of the cast joined her for I Wanna Dance With Somebody in the“feel good” finale song.

The musical is based on romantic 1992 thriller The Bodyguard, starring the late Whitney Houston and Kevin Costner. It is a story of a famous pop star, Rachel Marron, reluctantly protected by a former secret service agent, Frank Farmer.

I don’t think I’ll ever lose that feeling of feeling nervous and being anxious when going on stage, and I believe that shows you care

The film was back in the headlines recently when Costner confirmed Princess Diana was set to star alongside him in a sequel, and he received the first draft of the script the day before she died in the car crash in 1997.

Back to the original, no one I chatted to could remember the ending of the film; it has always been about the number one soundtrack.

Stepping into the shoes of Houston is Burke, who rose to fame after winning The X Factor in 2008, has been a finalist in Strictly Come Dancing, and performed in musicals including Sister Act, Chicago and Chess.

But Burke admits this has been the “hardest show” of all the musicals she has done. The singer is sipping ginger and honey tea when I meet her backstage in Edinburgh Playhouse, just 1½ hours before the show starts.

“I come off stage feeling so hyper and just over the moon I got through a show because it’s a hard show,” she says, sinking back into a soft couch. “I’m always so excited, I’m bouncing off the walls,” she says. The company manager, who is sitting to the side watching the clock, nods in agreement: “Yes, it’s true, She’s literally bouncing off the walls.”

Burke laughs: “It’s probably really exhausting for some people but it’s just who I am, I love it.”

But going onto stage is a different story. Burke is forthright and says, despite her experience, it is often daunting.

“I don’t think I’ll ever lose that feeling of feeling nervous and being anxious when going on stage, and I believe that shows you care,” she says.

Burke describes a recent experience of being on stage in Wolverhampton after taking a week off to go to a friend’s wedding.

“I was on stage shaking because I was so close to the audience it made me feel physically sick . . . I was a nervous wreck.

“I was here and they [the audience] were here [Burke points to the coffee table directly in front of us]. I was thinking why can I see what you’re drinking in your cup,” she exclaims. Burke says she thinks she felt that way because she was coming back after a week off but has found ways to calm her performance anxieties.

The singer says despite the hard work, she loves what she does. “Money couldn’t buy that feeling – to feel happy, to feel content within your work.

“The moment I stop getting nervous, I will rethink about my career.

“I love people so I love this kind of environment. I’ll talk to anyone,” she laughs. I’m linking her “gift of the gab” to her Irish genes from her Co Galway grandmother.

Burke recognises the enormity of taking on a role made famous by Houston, saying she will be “proud forever” to have had the privilege.

Burke says the first time she joined The Bodyguard tour in 2014, Dionne Warwick, Houston’s cousin, saw the show and told her she loved it.

“That was a real honour,” she smiles.“Dionne emailed me only a week ago and said to me make sure you’re getting a lot of rest.”

But there won’t be much rest for Burke tonight, or the next year, with the show coming to Dublin next month and touring until spring 2020.

“I’m such a perfectionist that I sometimes put too much pressure on myself,” she says.

I say goodbye to Burke as she begins her vocal warm-ups. The next time I see her is startling to say the least as the show begins with a deafening bang as she jumps onto stage and sings the opening number.

Huge fire flames shoot up in front of the stage, which are impressive, but make me a little anxious as I have no eyebrow hair to spare and they feel at risk of being singed.

It’s a party atmosphere in the theatre – mothers, daughters, friends, partners – are all engrossed in the songs, the emotion and the pockets of comedy

Just a few minutes into the show everyone is moving and even the reluctant musical-goer husband has uncrossed his arms and is tapping his feet to the music.

I wouldn’t consider myself a Houston fan, but to my own surprise I know all the songs, even all the words. What else don’t I know about myself? It’s a party atmosphere in the theatre – mothers, daughters, friends, partners – are all engrossed in the songs, the emotion and the pockets of comedy.

The plot is similar to the film – a bodyguard, Farmer, is hired to protect pop superstar Marron from a deranged stalker. We know Farmer is a “competent” bodyguard because he immediately spots there is no security system in her home. I’m suspicious of Farmer’s credentials (spoiler alert that doesn’t spoil anything) as he later brings her to a remote log cabin, with no security system, where the stalker immediately finds them.

Speaking of stalker, poor Farmer was overshadowed a little as a few in the audience suggested to Marron she should see her stalker before hiding from him.

His topless appearance with chiselled abs was greeted with wolf whistles and many “woooos” from the crowd. Though one woman disapproves: “They’re treating him like Magic Mike, but he’s a murderer.” She jumps with fright each time the “serial killer” makes a surprising appearance.

“He’s very menacing,” she whispers. It makes the show funnier.

The giggles and gasps stop when Burke (Marron) sings a duet with her on-stage envious sister (Micha Richardson), and it is one of the highlights of the night.

There was a bit of an odd video played at the end, but overall a night of fun, laughs, some sadness, but most of all impressive vocals.

And, as Burke says: “Even if you’re not fan of Whitney [she has seen through my facade], you can’t beat her songs.”

The Bodyguard runs in the Bord Gáis Energy Theatre from August 7th to 17th. For information go to https://iti.ms/2SyX8eB