Epiphany review: The play that’s a meditation on theatre itself

Those who gather to celebrate Epiphany aren’t quite sure what it’s all about – can this Joyce-inspired play make it any clearer? 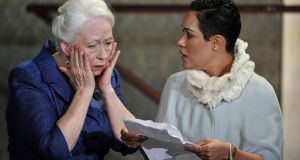 None of the eight guests quite know what they’re doing here. They all know their host, Morkan – a warm, moithered eccentric, brightly played by Marie Mullen – but they’re hazy with each other. “You don’t age!” one arrival exclaims. “We’ve actually never met,” comes the reply.

If acquaintances are loose and the invitations (with their specific, complicated requests) have been ignored, perhaps the host can shed some light on the occasion? “I have no idea what Epiphany is,” Morkan confesses, undimmed in her enthusiasm for a forgotten tradition.

Why, then, does Brian Watkins’s new play for Druid feel so familiar?

There are a couple of reasons. The first is that the American playwright takes Joyce’s The Dead as his starting point, a poignant story of strained celebrations and flickering connections. Here, imagined as a dinner party for addled intellectuals in a multi-cultural city, it retains some characters, erases others and introduces more, while the snow keeps falling faintly through the universe. Or at least through the high window behind the zig-zagging staircase of Francis O’Connor’s elegant set.

The second reason, which director Garry Hynes lightly trails, are glimmers of Druid’s own history. There’s the curiously Beckettian placelessness of this amnesiac setting, stranded between a floor above and below. (“We’re in a time machine!” one character marvels over the menu, which also explains the retro-jumble of Doreen McKenna’s costumes.) There’s also the comic panic and mishap of Enda Walsh. There’s also the philosophical and spiritual yearnings, loosened with wine, that echo Tom Murphy.

That all chimes with a play that feels more haunted than self-possessed, so anxious about the confused present and fretful about its absences that the play’s guest of honour, Gabriel Conroy, fails to arrive. Instead, Grace Byers’s ethereal Aran arrives to convey his speech, made partly illegible by the snow. Behind a long table that helplessly recalls The Last Supper, the guests argue over it like a sacred text. What do Gabriel’s fears for our “thought-tormented age” and coarsening “new generation” - still fresh after more than a century - say about us?

Watkins’s characters are certainly more distracted, deploring their smartphones while hugely dependent on them (they have been confiscated on arrival), easily taxed in their attention spans, and – setting a precedent in Irish theatre – so averse to physical contact they roundly defeat an invitation to dance.

Despite assured performances, this crowd feels cramped in other ways, though, their dialogue often falling into pendulum-swing dialectic: Kate Kennedy’s lofty empiricist vs Byers’s floaty aesthete; Mullen’s older conservative vs Julia McDermott’s woke millennial, all advancing positions without quite arriving at one.

It’s easier to see the play as a meditation on theatre itself: another gathering, preferably without phones, for an ancient ritual asking to be reinvented. Epiphany places itself modestly within that tradition, where memories flare and dim, shadows dance and retreat, and the characters for life’s gatherings try to work out whether they’re coming or going.