The Scourge and Hue and Cry: The best in theatre this week

One woman reflects on caring for her mother; two long estranged friends deal with grief 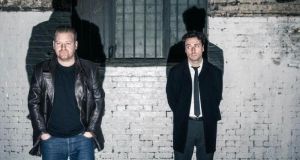 When sorrows come, observes one Shakespearean character, they come not single spies, but in battalions. In the case of Michelle Dooley Mahon, who cared for her mother Siobhan, a Carlow woman, over 10 years as she suffered from Alzheimer’s, while dealing with her own depression and diabetes, sorrows nestled themselves into sorrows. That, however, did not dim the wit and affection with which Dooley Mahon wrote of her experience in Scourged, a self-published autobiographical novel that recounts life in small-town rural Ireland with emotion and humour.

Last year, her memoir became the substance for a solo work for the stage, performed by the writer. Produced by Wexford Arts Centre and directed by Waterford Theatre Royal’s artistic director Ben Barnes, the performance recreates the tone and tenor of a family struggling to cope with their mother’s illness, one that has robbed her of her voice, visiting her in the nursing home where she has spent the last years of her life. Now the production returns to feature in the First Fortnight Europe Mental Health Arts Festival. Often a gruelling time for people with depression, the first weeks of the new year host a time to come together and share experiences, to dispel the chill of isolation with warmth and fellow-feeling.

Contemporary dance has a small following, a choreographer shyly explains to his one-time friend, a man more comfortable with the improvised moves of club football. Still, Damian, the sports fan, tries to identify: “Like Rovers?” he asks. Close enough. That these two men, who haven’t met for 12 years, might now meet each other somewhere between these references gives Deirdre Kinahan’s 2007 play its bittersweet thrust, bringing them to Damian’s family home shortly after the death of his father.

There is, as the scriptures put it, a time to mourn and a time to dance, but Damian, a stranger to both the home and to his emotions, prefers to keep things much more low key. Kevin, his accidental cousin, is more expressive in every sense of the word, urging Damian towards dancing out his mourning, inspired by kinetic Jewish rituals and also, as it happens, his most recent production, a show called Grief. That makes for comedy in a minor key, and this production, revived after another 12-year interval, brings its own chimes: now original cast member Will O’Connell directs Stephen Jones and Ste Murray in the roles, in an affecting show that puts the motion back into deeper emotions.