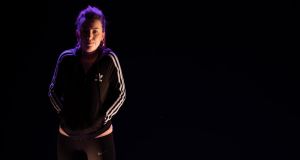 Charlie’s a Clepto: Clare Monnelly populates a north Dublin neighbourhood with a gallery of distinctive characters

Civic Theatre, Dublin
★★★★☆
If talent borrows and genius steals, as the old line goes, what does that make Charlie? The light-fingered protagonist of Clare Monnelly’s artful debut play, for Axis arts centre, in Ballymun in Dublin, is certainly clever, but she turned to petty crime at an early age all because of a misspelling. Flaming out of a spelling bee, humiliatingly, at the first letter of the word “kleptomania” (hence the title), she instead puts the word into rebellious practice, spelling out the objects of her shoplifting as she goes: “T-A-M-P-O-N-S,” say.

Now a reformed, or at least reforming, character, Charlie has just one day to go before a crucial interview with social services, one that may decide if she can be reunited with her young son. In more senses than one, this proves to be a satisfyingly epic day, bringing Charlie into the paths of thundering monsters, into a pursuit of her errant father, and along a daring quest of discovery.

As writer, Monnelly’s own lifts are so subtle, with glancing references to films from Finding Nemo to Forrest Gump, that you barely notice how well she has raided the eternal vaults of good storytelling.

Charlie’s odyssey is immediate and gripping, helped along by writing that is deftly comic and evocative

As nimble in her performance as she is in her plotting, Monnelly pivots through a range of characters over the course of her absorbing, near-flung journey. Under Aaron Monaghan’s fleet direction in this revival of her play, she populates a north Dublin neighbourhood with a gallery of characters: her separated parents, an alcoholic mother and wheeler-dealer father; a newly returned feckless ex; and a clatter of neighbours so distinctive they almost seem to have one foot in mythology. (As with one early challenge, a bust-up with a hefty dolt that arouses the vengeance of his more fearsome mother, the show trails some epic influences lightly, never, unlike Charlie, spelling them out.)

That means the play won’t lumber under the weight of any baggage. Chasing her father through suburban perils, while jolted back into character-defining flashbacks, Charlie’s odyssey is immediate and gripping, helped along by writing that is deftly comic and evocative.

Any Dublin monologue adventure will recall early Mark O’Rowe plays, while the gait-shifting physicality of Monnelly’s multiple role-play, however understated, can feel close to an actor’s showreel. But Monnelly brings some genuinely refreshing perspectives to this quest, among them Charlie’s vivid description of giving birth, for which she is hopelessly unprepared, which becomes a feat as heroically defining as any of her later capers.

The more remarkable discovery, though, involves a pause for self-realisation: “Jumping to conclusions, getting ahead of myself, overreacting,” Charlie reflects, during a quick audit of her family life and circumstances. “That’s all me. I got me here.” In an elegant parallel, the one-time thief’s bolt of insight feels similar to Monnelly’s laudable achievement with the play. It recognises narrative inheritances without becoming a slave to them, makes decisions both brave and agile, and forges a new story that is entirely her own.