Many fundraising events including street collections cancelled due to Covid-19 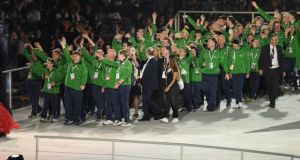 Fundraising for Special Olympics Ireland was “severely hampered” by the pandemic and will get worse next year, the organisation has warned.

Matt English, chief executive of the charity which supports more than 8,000 athletes with disabilities – aged from 4 years to 84 – said it lost around €600,000 in donations with the cancelling of its street collections in April.

The cancellation of other fundraising events such as golf outings, marathons and sea swims during the year has also put a dent in the organisation’s finances.

Mr English told the Oireachtas Joint Committee on Disability Matters that it was difficult persuading the public “not to be nervous donating online”.

“It’s not how many people donate,” he told TDs and senators on Thursday, the UN International Day of Persons with Disabilities.

Special Olympics Ireland launched an online Can’t Stop Now video appeal in October, featuring actor Colin Farrell and singer Hozier, in an attempt to make up a shortfall in donations.

“We are a sporting organisation first and foremost but we are also a charitable organisation in the disability sector,” said Mr English.

“Fundraising, community funding, we depend on quite a lot. It was severely hampered.”

Emergency pandemic funding, including the wage subsidy schemes, proved “critical” for the organisation during the year, but he warned next year would be tougher again.

“We would see 2021 as a tougher year than 2020, in a fundraising capacity,” Mr English told the committee.

Special Olympics Ireland is recognised as one of the strongest “if not the strongest” such programmes in the world, he added.

The charity supports 290 clubs on the island of Ireland, covering 15 different sports.

A 10 week programme, Together at Home, launched in April focused on keeping members active and “putting routine and structure back into daily lives”, said Mr English.