Specialists warn that a large and growing backlog of patients, including those with lung cancer, are not getting urgently-needed care 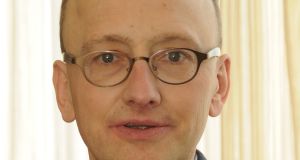 Dr Aidan O’Brien: he has demanded that dedicated respiratory units be set up in hospitals to help deal with the crisis

Almost three-quarters of respiratory consultants in Ireland say the coronavirus crisis has led to delayed diagnosis in other illnesses, a survey has found.

A large and growing backlog of patients, including those with lung cancer, are not getting urgently-needed care, the specialists have warned.

The Irish Thoracic Society, which represents respiratory doctors, said the burden from Covid patients was threatening to “buckle” healthcare systems both in the Republic and the North.

In a survey of frontline consultants, it found 95 per cent said the pandemic was negatively impacting on their ability to tend to patients other than those with the virus.

Almost nine in 10 (88 per cent) said waiting lists for routine care had increased as a result of coronavirus, with three in 10 respiratory consultants reporting their waiting lists having soared by more than half.

More than seven in 10 (72 per cent) said they were “not confident” the system could adequately deal with the backlog.

Dr Aidan O’Brien, president of the Irish Thoracic Society, has demanded dedicated respiratory units to be set up in hospitals to help deal with the crisis.

“The results of our survey illustrate a large and growing backlog in patients who have missed out on essential diagnosis, interventions and routine care due to the impact of Covid 19. This is already having a serious knock-on effect to the health and quality of life of these patients.

“Of particular concern are people with lung cancer who may have experienced delayed diagnosis and, as a consequence, delayed initiation of vital therapy.”

Some 60 consultants were polled for the survey – more than half of all respiratory consultants on the island – during November.

Almost three-quarters (73 per cent) said the “unprecedented” burden has led to delayed diagnosis of illnesses, with almost six in 10 (59 per cent) reporting it had resulted in delayed treatment for acute conditions.

Four in five consultants said they were seeing fewer patients with non-Covid-related lung problems since March compared to the same period last year.

A quarter of the doctors said they were tending to half as many patients as normal.