‘It will get busier and busier and then peak on December 23rd , Covid or no Covid’ 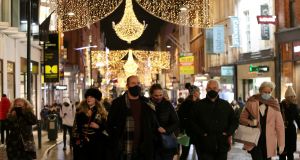 Shoppers on Grafton Street in Dublin on Friday, on the first evening of the reopening of gastropubs and restaurants. Photograph: Laura Hutton

Retailers have described the days since Tuesday’s reopening in glowing terms, and expressed optimism that they are in line for a happy Christmas despite the unprecedented upheaval of 2020.

Anthony Ryan of Ryan’s of Galway on Shop Street said business had been “buoyant” in the city all week, but he stressed that while the city centre was busy, it was also “controlled”.

Footfall in the city is approximately two-thirds of normal at this time of year, but those who are in town are there to spend. “I would expect that things will get busier as we get closer to Christmas,” he said.

A retail veteran, Ryan said he “never seen a Christmas” that did not follow the same pattern. “It will get busier and busier and then peak on December 23rd just as it always does, Covid or no Covid.”

People are buying gifts, shirts and knitwear, but there has been a notable decline in the sales of occasion wear this year as people have struggled to come up with any reasons to buy clothes to go out in.

Pam O’Regan of Saville Menswear in Cork was similarly upbeat, saying the past week has been very good. “It has been just brilliant to get the doors open again,” she said, adding that “there is a nice vibe about the place”.

She described trade as “good and steady with wee bursts and then spells of calm again. All in all there has been a nice vibe about this year.”

She said that it had quickly become clear that “people are just so glad to be out and about and talking to human beings, and it was so heartening to see happiness coming back to the city again”.

“We are not hearing much about queues, and the numbers that are out and about shopping have been very manageable, and there has been a good buzz about the place all week,” he said.

He said customers have been conditioned by the months of the pandemic, and they know what to expect when they go out and about. “They are responding accordingly,” he said.

People are spending less time in shops, but they know what they want before they go in and they are spending more money when they are there,” said Arnold Dillon of Retail Ireland.

Unsurprisingly, most were buying Christmas presents. “We also saw there were strong sales of women’s and children’s clothes in the first couple of days after the reopening, but as the week went on sales of men’s clothes started to pick up as well.”

Mr Dillon said there had been no overcrowding issues around the country, but he said that shop owners were conscious that it was still comparatively early in the shopping season.

“We know that we are likely to see crowd numbers climbing as we come closer to Christmas, but we are confident that the protocols that we have in place across the board will work.”