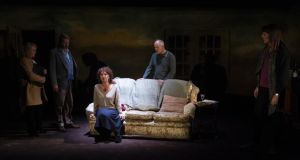 Abbey Theatre
★ ★ ★
Recent hearings may bring a shudder of topicality to Deirdre Kinahan’s new play for Fishamble and the Abbey, but the sadder truth is that the story of a secret survivor of sexual assault who encounters her rapist years later would always be timely.

Briefly alone in the murky space of her family home, to which she has returned after the death of her mother, Karen Ardiff breathes one fraught question that motivates the play: “What the fuck happened here tonight?”

Like the details around remembered trauma – alternately vivid and distended – the action of Kinahan’s play is pieced together in retrospect, initially in slow and then in sudden judders. Dairne (Rebecca Root), nee David, is introduced with unhurried detail, an old friend whom Sandra has not met since, as she blurts out, Dairne “transformed”.

Transformation, and its consequence, is the concern of Kinahan’s play. When another school friend, the estate agent Linda (Janet Moran), arrives with her jovial husband, Eddie (Charlie Bonner), Sandra recognises him as her attacker from 25 years ago. The play, like a mind in panic, begins to fragment, leaping back in stages and hopping between alternative paths. Should Sandra confront him or flee? What are the consequences of accusing for her, for her family, for him? Is it enough to tell the truth?

With echoes of Ariel Dorfman’s Death and the Maiden, a demand for truth and justice through a fog of uncertainty, Rathmines Road concentrates instead on the dilemma of coming forward. This, appropriately, is not a drama of ambiguity: you believe her. But the story is strangely told. A leap in time is accompanied by a surge and snap of electricity, a device better suited to sci-fi. The oppressive hues of Maree Kearns’s set acquire an iridescent shimmer under her shifting lights. In Jim Culleton’s direction, movement often seems stark and heavy-handed: at one point Ardiff literally backs into a dark corner; at another tense moment the five characters line up bowling pins; and in one absurd pivot Moran moves from assailing her husband’s accuser to making her an accomplice in undermining Dairne’s claim to womanhood.

One reason for this, we come to understand, is that Sandra, like the playwright, is running through different scenarios. (“I wanted to try to feel what it is like to disappear,” Kinahan writes in an author’s note, “into an abyss where every social, cultural and judicial reflex conspires to silence, to shame and to deny… you.”)

If the play is unsatisfying, it is not meant to be. Although theatre trades in transformation – the conflict and climax beyond which nothing can be the same – Sandra imagines only an inadequate apology, a loss of marital trust, an indelible mark of victimhood. That’s not a great message to give survivors of sexual assault, who have encountered precious few of them recently. Here, though, is a compassionate imagining of one woman’s private torment, the vexed decision to keep it to yourself.