Seán McGinley: ‘I just wonder why more actors don’t marry each other’ 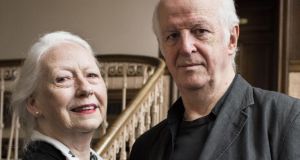 “She’s not a serial killer,” says Seán McGinley of his wife, Marie Mullen. I have asked him to tell me one surprising thing about Mullen, who is out of earshot for this part of the interview. The three of us are having breakfast in the Stella Diner in Rathmines; chosen due to its proximity to the rehearsal space they are using in the lead up to the Irish premiere of Lucy Kirkwood’s The Children.

For an hour or so, the three of us had talked together. For the last part of the interview, I am asking each separately a number of questions about their spouse. I suspect that the non-serial killer Mullen may be quite surprised indeed to hear this unsurprising ad-hoc news when husband and wife compare notes later.

When asked to describe his wife in three words, McGinley doesn’t hesitate. “Honest, courageous, beautiful,” he says at once.

Mullen’s is a not a presence you would soon forget. McGinley is more of a chameleon, retaining his cap and scarf through breakfast, as if he’s on the point of departure

How would she describe him? “God knows,” he says, startled at the question. “That’s two words,” he then jokes. “Funny?” He can’t come up with any others. “I can’t put my head in that space,” he confesses.

In fact, when her turn comes, Mullen does indeed say “funny”. In addition to “kind” and “passionate”. She thinks about what words her husband might have chosen when summing her up. “He probably said something like I’m passionate about work. Sensitive. Generous.”

As for her surprising fact about her spouse, she says, “What’s always surprising to me is his ability to go into another world when he is listening to traditional music. There is something pure about the way he hears it.”

Actors often look noticeable when they walk into a room. They carry some innate instinct that is always primed to rise to the surface of performance. I had got to the restaurant first, and watched as Mullen walked in with the confidence of a queen. It’s partly the dramatic long white hair, partly the extraordinarily expressive face that is an actor’s gift, and partly something else harder to define; character. Hers is a not a presence you would soon forget. McGinley is less theatrical and softly spoken; more of a chameleon, retaining his cap and scarf throughout breakfast, as if he’s on the point of departure at any moment.

McGinley and Mullen have been together, as life partners and fellow actors, for more than four decades. (Mullen tells me she considers herself an actress, not an actor. “I’m old school,” she says.) The two first met in Galway in 1977 when McGinley auditioned for a part in a Druid play, and married in 1990. They have two daughters, now adults, but when they were children, balancing work and family was unusually challenging with both parents in a profession that requires working consecutive nights for weeks at a time.

“It was important when they were small to do the school run,” Mullen says. “In the last few years we can both work a bit more.”

Actors usually greatly dislike talking about reviews from any perspective. The pair stare down into their mugs of coffee, and neither answers for a while

How did they figure out when each would work when their children were little? Mullen laughs. “By whoever was offered the work.” They say they were never competitive. “It has never felt like that, because it is like a dance we do,” McGinley explains. “You do that role, and I’ll step back for a bit.” The Children will be the first time they have worked together in 27 years. They play a married couple in a three-hander. The Children, which opens at the Gate Theatre on March 6th, was originally staged at the Royal Court in London. It will be directed by Oonagh Murphy. Ger Ryan plays their old friend, a nuclear scientist, who comes to visit after a long absence. Mullen and McGinley’s characters are a married couple who are also retired nuclear scientists.

“We are just two actors who come to work together,” Mullen says, shaking her head.

“We’ll see how it goes,” McGinley says. “But it doesn’t feel any different to playing any other roles. I just wonder why more actors don’t get married to each other.”

“We don’t talk about work at home,” Mullen says. “It’s nice to close the door and cook and watch some TV and get ready for the next day.

“When you finish work at 10.30 at night, you can’t switch from performance mode to sleep straightaway,” McGinley says. They watch TV together to decompress. Their current favourites are Better Call Saul and The Crown. Mullen, it emerges, is fond of the crime genre, and a particular fan of Agatha Christie’s Miss Marple.

I ask about reviews. Do they matter to them? Do they read them – or rather, when do they read them, because most people would find it difficult to believe actors never read reviews at all, particularly from significant publications.

Actors usually greatly dislike talking about reviews from any perspective. You can almost see the thought bubbles forming over their heads, and it’s always the poor reviews that will stick in anyone’s craw and mind. The pair stare down into their mugs of coffee, and neither answers for a while.

“It’s all about delivering the script as best you can. You give your best interpretation of the work, and you learn through the run,” McGinley says, clearly trying his best to not make any comments about reviews at all. But does he read reviews? “I don’t read them. Until years later. A review isn’t going to help your performance. Whether it is good, bad or indifferent, it’s not going to help. Reviews are a necessary part of the whole eco system,” he says, suggesting that actors have a job to do, and so do critics.

If he doesn’t read reviews until years later, how does he measure the success of the play? “You’d know from the audience reaction,” he says.

“I don’t read them until after the show,” Mullen says. “At the end, maybe. You make decisions about doing a thing and then you have to stick with it. You can’t change it because of a review.”

“Nobody likes bad reviews,” McGinley says eventually. “If you don’t get a good review in the New York Times, you’re bunched, but here, word of mouth carries more weight that reviews.”

I point out that going to the theatre involves paying for a ticket, and any transaction that involves money is at base also a business one. After all, audience members are not let in for free, and they do generally like to read reviews as part of the decision-making about whether they want to go to a particular play or not.

There follows a lively discussion between the two about why reviews are or are not important for the production as a whole, rather than as a critique of an individual performance. They temporarily seem to forget I am there.

“What she means about reviews is, how does the public get to come to the play,” Mullen says.

“But we know ourselves if the play is good. I don’t think reviews are as important here as in other countries,” McGinley says.

“But a bad review could still empty a theatre here,” Mullen says, and McGinley has no response to that.

I wouldn’t be able to play Blanche DuBois now. Could I play the Widow Quinn again? I could bring plenty to it when I was 30. But what about now?

Listening, I realise that actors will always see reviews as personal. Perhaps a director has a more bird’s-eye view of the entirety of a production, but the truth is, if you are an actor, you are going to care most about what a reviewer says about your own performance. Those are the sentences that will burn into your memory forever, whether the review is good or bad.

Mullen is now 65 and McGinley turns 63 this month. Sixty-five is the mandatory retirement age for many State-funded jobs, and in many privately-run companies. But of course, actors, like writers and musicians, do not have to acknowledge any official retirement age.

“Our profession is very odd,” Mullen says. “If I’m thinking about performing, I have to think: what parts are available to me now? What can I play? My voice doesn’t suit everything, and that comes into it. I wouldn’t be able to play Blanche DuBois now. Could I play the Widow Quinn again? I could bring plenty to it when I was 30. But what about now?”

“As long as we can keep going physically, we will keep doing it,” McGinley says.

Before we wrap up, I ask each of them is there something that drives them mad about the other.

“I can’t think of anything,” McGinley says. “Well, she is always leaving the milk out of the fridge.”

The Children, by Lucy Kirkwood, previews at the Gate Theatre from February 28th and runs until March 23rd