Theatre highlights: A bracing documentary on HIV in Ireland

Look out for ‘Rapids’, about life with HIV by Shaun Dunne, and the Abbey’s 24-hour plays 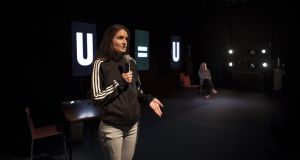 Rapids are natural phenomena, explains the disarming writer and performer Shaun Dunne; a sudden change in circumstance that lead an ordinary flow into an inexorable surge.

It’s a striking introduction to his arresting show with Talking Shop Ensemble, a bracing and smartly constructed documentary on living with HIV in Ireland, slipping between ritual, lecture and performance, while stealthily revealing more and more. Disclosure is a running theme.

HIV itself has had an accelerated biography, from a misunderstood virus to a manageable condition. It is now startlingly resurgent: the rate of infection in Ireland is twice the European average.

Through interviews with a range of people affected, from young men to migrant women and recovering addicts, Dunne’s material is shared among three performers in patterns of lulling repetition, ritualistic action and, at one point, audience response, as though in a deconsecrated mass. Rapids builds a skilful, shocking picture of how shame around HIV persists, maintained by silence and invisibility.

HIV infection, thankfully, can be largely prevented and effectively treated. But for an oblivious culture, a work as involving and compassionate as Rapids could the beginning of an antidote.

If practice makes perfect then the modest mass of people who convene yearly to write, rehearse and stage a series of short performances in less than a day ought to be pretty good at it by now. But let’s hope not.

This exercise in insta-theatre, conducted by New York’s 24 Hour Play Company to fundraise for Dublin Youth Theatre, and supported by BNP Paribas, depends on the nervous exhilaration and camaraderie that rise to meet impossible challenges, more commonly known as “theatre”.

Returning for the eighth year in a row, the project recruits a buoyant and very game assembly for an accelerated version of process. The writers (including Enda Walsh, Amy Conroy, Eva O’Connor, Erica Murray, David Horan and Fionn Foley) are assigned a theme and choose a cast, then write through the night.

Next morning, the directors (including Karl Shiels, Claire O’Reilly, Paul Reid, Julie Kelleher, Mollie Molumby and Will O’Connell) select their plays, then rehearse and tech through the daylight hours.

The performers (including Aaron Monaghan, Sarah Morris, Billie Traynor, Rebecca Grimes and many more) memorise their lines early and flawlessly. And the stage managers do all the hard stuff.

Nail-biting tension and an audience in on the joke is always part of the fun. Things go wrong, the night can run long, but the show will go on.

Saoirse Ronan: ‘I never got cast for my looks’
8