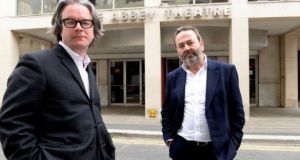 A frank discussion about the lack of Irish actors and productions in the Abbey Theatre has taken place between theatre management and a representative group of artists.

Friday’s meeting is the first of several planned engagements after an open letter was sent to the Minister for Culture Josepha Madigan last month by 312 people from the theatre world expressing “deep concern and dissatisfaction” with the direction of the Abbey Theatre.

The open letter, which has since garnered more than 100 new signatories, criticised the direction of the Abbey Theatre since Neil Murray and Graham McLaren took over, as co-directors, in January 2017.

The letter expressed particular concern at the dramatic fall in directly employed actors in Abbey productions from 123 in 2016 to 56 in 2017 and 65 last year.

In a joint statement, both sides described Friday’s meeting as a “positive and productive first step” which will be followed by bilateral meetings with those directly affected by recent changes made to the Abbey Theatre’s programmes.

These include actors, agents, designers, directors, producers, technicians and writers.

A report on progress will be prepared for April 2019.

The letter to the Minister had also expressed concern that the model of co-productions with other theatre companies means actors are paid less than they would be if they were paid directly by the Abbey Theatre.

One of those present at the meeting who did not want to be named said the Abbey Theatre had already conceded one key demand from the signatories of the letter – that actors involved in co-productions be paid the same as actors who are directly employed in Abbey productions.

The issue came to a head – described in the letter as “the final straw” – with the Abbey’s seven-week Christmas production, Come from Away, the European premiere of a successful Broadway musical, which transfers to London’s West End at the end of this month.

The letter went on to state that no Ireland-based actor had been directly employed on an Abbey stage in an Abbey Theatre production for the 5½ months between the final performance of Jimmy’s Hall, on September 8th, 2018, and the opening of The Country Girls, on February 23rd this year.

The meeting on Friday was co-chaired by Siptu (Equity) representative Karan O’Loughlin and by the chair of the Abbey Theatre, Dr Frances Ruane.

Ms O’Loughlin said the meeting had been “constructive” and there was honest engagement between both sides.

She said both sides had agreed not to discuss specifics with the media until agreement is reached on a way forward, but she confirmed that the direct employment of actors was one of the issues raised and there was a “full and frank discussion”.

She said: “There was a lot of good will on both sides to move into a space where everybody feels that the national theatre is what it could be.

“Our concerns have been taken seriously by the Abbey Theatre and hopefully will be taken forward. We would hope to see good collaborative working throughout the course of 2019.”

Among those from the theatre community who attended were the actors Declan Conlon and Geraldine McAliden, producer Clíona Dukes and writer Jimmy Murphy. The Abbey was represented by its chair Dr Ruane, co-director Neil Murray and Sarah Durcan, a board member.