The week's theatre highlights: Glasgow Girls and The Cripple of Inishmaan

Martin McDonagh’s scabrous comedy at the Gaiety; stirring Glasgow Girls musical at the Abbey is timely for more than one reason 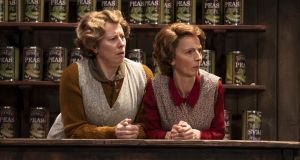 The Cripple of Inishmaan

There’s always been a sly self-reference in introducing Robert O’Flaherty’s work into a Martin McDonagh play. In 1934 O’Flaherty’s famously sensationalised documentary, Man of Aran, imagined the harshness of life on the rugged Aran Islands and blew it out of all proportions for the sake of filmic impact, to great international success. In 1997, McDonagh, then a young and prolific London-Irish playwright concocting scabrous rural Irish melodramas featuring staggeringly spiteful caricatures, was doing something similar, to great international success. Setting The Cripple of Inishmaan, the first of his Aran Islands Trilogy, against the casting of the film provided McDonagh with two things: a playful nod and, for the protagonist Cripple Billy, a chance of escape from drudgery and disregard on the island.

Directed by Andrew Flynn, whose Galway company Decadent are gaining on Druid in their association with McDonagh’s work, this Gaiety production wisely pursues its own exaggerations, with a pleasingly outlandish design and some knowing comic performances from an accomplished cast. The play, however, is less taxing than the Cayman Islands, mostly one-note with as many ideas, and trading plot development for a corkscrew of twists. That can make the play drag worse than Billy’s foot. But a fetching production has some spry ways to fill it.

The Abbey Theatre is having a moment, with criticism expressed in the media and recently the Oireachtas about the theatre’s programming policies and support for Irish artists. The optics might not be wonderful, then, that the National’s first production after Canadian musical Come From Away is a very short run of a Scottish musical. But leave Glasgow Girls out of this. Based on the true story of seven teenagers who are rocked by the forcible deportation of their friend and her asylum-seeking family, director Cora Bisett’s musical was a critical and popular hit on its debut at the Edinburgh Festival Fringe Festival.

With the intolerable conditions of Ireland’s Direct Provision ever more apparent, the visit is grimly timely, but the experience of the show, with a book written by the marvellous David Greig, is anything but glum. Rather it espouses a politics of energy and optimism, through music and dance, which is rooted in the real example of Glasgow neighbours fighting for the rights of their newest residents. Expressing such camaraderie within the harmonies of a musical, the medium here is also the message – all together now.

The Boys in the Band is theatrical, dated and utterly fabulous
3

So what is the meaning of Lowery’s existential fable ‘A Ghost Story’?
9

YA fiction: Children of Lir’s Aífe tells her side of the story
10