Despite, or perhaps because of, their differences ‘Every Day I wake Up Hopeful’ and ‘East Belfast Boy’ share several attributes 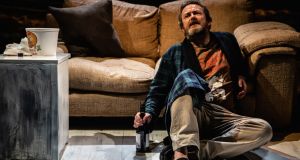 The unifying element of this Prime Cut Productions double bill is the struggle to assert an entitlement to life while intimations of mortality insist on the imminence of death. Grim though this may seem, both plays are infused with a humour, despairing or defiant, typical of each character.The very fact that one can describe the comedy as characteristic indicates how completely each of these very different men is presented, how accepted, if not entirely acceptable, they become. This is true even though the narratives are so diverse and the personalities unalike almost to the point of inherent opposition. What brings them together in this forceful theatrical package is the purposeful writing: a stylish clarity common to both playwrights and ringing with commitment.

Not that commitment is exactly the tone for Every Day I wake Up Hopeful where Simon O’Gorman’s Malachy remarks that he’s not a bad man, he’s a nice guy, people like him being around. And so, it must be admitted, do we. Contemplating an existence for which he seems to have no responsibility – he didn’t ask to be born, after all – Malachy explores his angst as a protracted suicide attempt. He has drifted through life, letting things just happen and wondering, too late, how and why, totting up, too late again, the losses of an unarranged and involuntary presence in the world. Half man, half upholstery and with a laugh like a rascal’s snarl, O’Gorman gives the text by John Patrick Higgins its weight of charm, despair and self-delusion. Direction by Rhiann Jeffrey keeps Malachy tight to a set in which his luxurious and pliant voice creates the movement; no wonder people like having him around.

This may not be the case with East Belfast Boy, where Ryan McParland as Davy gyrates to the compulsive rhythms of DJ Phil Kieran and the choreography of Oona Doherty. Punctuated or compelled by a nightclub shuffle infiltrated with a Lambeg-like insistence on tribe, Davy needs to make all the right moves with his mates, finding the edge, seeing the shapes. His undeleted expletive-ridden life is a life under fire but the build of his antic commentary achieved in Fintan Brady’s script via director Emma Jordan is hindered by diversions into stand-up. The splintered mood has to be retrieved through the pulse of a staccato accent tinged with threat as if Davy, fractured by the past, senses something in the future he already dreads.

Despite, or perhaps because of, their differences both of these plays share several common attributes. They present utterly convincing performances by two fine actors. They are both designed by Ciaran Bagnall and Sarah Jane Shiels. Apart from publicity flyers, neither production is given the helpful dignity of a programme but in a casual listing of credits there is some separation of powers. Bagnall is responsible for the short rake of the set, a tight and largely unadorned space which contains and intensifies the human paradox within its boundaries, and for the triptych behind it. Shiels is the lighting designer; like so many of that profession she is the angel unawares, the often unrecognised influence on the look of things, the feel of things as here. For nice old Malachy who wants to make himself someone else’s business and for scared young Davy who is nobody’s business at all she teases location, likelihood, empathy or foreboding from that background cloudscape of layered colour. It’s all to the credit of Prime Cut Productions, even without the credits.