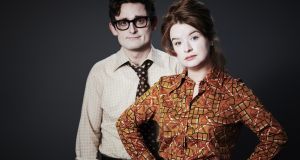 What if you could step back in time? Things might well turn out to have be worse. The Fall of the Second Republic, the new play from Corn Exchange, brings us back to the past, and to a whole new vision of Ireland in the 1970s. It is 1972, Ireland is on the eve of the referendum to join the EEC (later to become the European Union), the Troubles are just getting into their vicious stride, and Manny Spillane is taoiseach.

The men have sideburns, women struggle to make their voices heard, and you need a roll of 5p coins to make a call from the public phone at the back of the pub. Newspaper offices have typewriters, research has to be done in person, and taking the boat to England is still a thing. Some things change more slowly than others.

In playwright Michael West’s parallel, counterfactual universe, Spillane, played by Andrew Bennett, and surrounded by his henchmen and family, not only calls the shots, he calls hits on his opponents. He is also up to his thick neck in dodgy deals, which gives us the play’s opening scene: the taoiseach’s grand project to demolish the old Theatre Royal and turn it into an international banking centre.

If the metaphor about a government wishing to demolish culture in favour of filthy lucre appears a bit heavy-handed, consider this: in a time of near-full employment, Corn Exchange has had its funding cut. Not cut as in reduced, but cut as in completely deleted.

This is (a) because of the general underfunding of the arts, but also (b) due to one of the more insane policies to have come out of the Arts Council. The policy in question steers money away from paying theatre company salaries, and towards funding productions on a case-by-case basis; but as Corn Exchange’s Annie Ryan, who is directing Second Republic says, “How are you meant to live while you’re developing a production to the point of a funding application?”

The policy also ignores the vital role in supporting experimentation, and failure.

Corn Exchange is not the only high-profile company to suffer this fate, but its dogged determination to survive, following a near 50 per cent cut in 2010 (the year its brilliant Freefall premiered), and the slew of success that have followed, does make it seem like a particular kick in the teeth.

Ryan and West are surprisingly sanguine. West now commutes to a teaching job in Queens, Belfast, while Ryan is pondering options. Still, there is something particularly unedifying about people with secure public-sector jobs deciding that most people in the cultural sector shouldn’t be enabled to aspire to such things.

But The Fall of the Second Republic hinges on a deeper vein of disquiet than that engendered by the loss of a theatre company. The Manny Spillane character simply has to be modelled on a certain Charles J Haughey, even though Haughey himself wouldn’t become taoiseach until 1979, and no one is suggesting he was ever entertaining suspending the Constitution. It is Spillane’s present-day counterparts that cut far closer to the bone.

As we sit in the rehearsal studio on the top floor of the Abbey Theatre, Chicago-born Ryan suggests that the consequences of the scenario that unfolds in the play: that of a disintegrating society, in which greed and self-interest are prioritised, and those in power are above the law; are also unfolding in front of her eyes. She points to the actions of Ice – the Immigration and Customs Enforcement agency – in the US, to the separating of families, caging of children and summary deportations. She points, with an eloquent grimace, to a whole range of now mostly unremarked-upon outrages against the truth, fairness and ethics in the country of her birth.

In the play, the action flips between the scheming politicians, and a newspaper office, in which journalist Emer Hackett, played by Caitríona Ennis, works doggedly to get her story out, against a backdrop of apathy, fear and increasingly dangerous odds. As she does, the play’s move to aggressive State control, and to chaos, is tempered with grim, though also frequently very funny, comedy.

When I see the rehearsal, the actors aren’t yet at the costume and make-up stage. When the play is ultimately performed, it will not be in the company’s often-used commedia dell’arte whiteface make-up but rather in gentler shades of pale.

Commedia, as Ryan explains, prioritises movement and gesture, and distils action into distinct emotions. I notice that as she directs the actors in rehearsals, she uses delicate hand gestures herself, almost like a conductor. It is a very dynamic rehearsal. Many of the actors are playing multiple roles, and there’s a pause while extra lines are written in, to allow one character to switch costume and persona.

In some ways Corn Exchange’s three plays Dublin by Lamplight, Freefall, and The Fall of the Second Republic could be seen as a loose trilogy. Dublin by Lamplight looked at the ideals – and yes, sometimes idiocies, surrounding the founding of the State. Freefall came out at the time of the Ryan report (into child sexual abuse), and explored life and society through the eyes of a man whose own life was disintegrating. It opened in the week the International Monetary Fund came to town.

In this new play, West says, “we wanted to look at a republic falling apart from the inside, and explicitly call it that. And the other idea was to follow the grandchildren of Dublin by Lamplight, which was the first ensemble piece we did.”

The younger actors in the cast won’t remember the 1970s. Mood boards on the rehearsal room walls are there to give hints of the general beigeness of the times. They also won’t remember pub phones where you have to press Button A, or the day-to-day, almost banal inevitability of the awfulness of the Troubles, or a life without the internet. But in that forgetting, an inevitable part of moving on, lies risk, also hinted at within the play.

I go to meet West on his return from Belfast, in the mews house he shares with Ryan. It’s the morning of election day, and I’d like to say there’s a clear sense of a turning tide in the air, but there isn’t.

The year in which the play is set, 1972, is also a critical choice, West says, “particularly because of 2016 [which saw both the election of Donald Trump and the Brexit vote]: the whole idea of the media and truth seemed more and more relevant”. It was, he reminds me, the year of the Watergate scandal, which saw President Richard Nixon resign. Watergate broke thanks to the determined efforts of journalists, most famously Bob Woodward and Carl Bernstein of the Washington Post.

“There is the idea that that was the last generation that was scared of the truth,” West continues. “And that politicians feared it.” He also notes, echoing similar remarks by Armando Iannucci, author of The Thick of It, and the recent The Personal History of David Copperfield: that the pace of events today is simply too fast (and often seemingly senseless) for contemporary drama, especially that which relies on satire, to keep up.

Actor Dominic West, who acted with Ryan and West (no relation) on and off for over a decade, has described Ryan as “the best director I have ever worked with: the most frightening, the most creative and the most inspiring”, going on to call Corn Exchange “a world-class company”.

With this final production, a blast from an alternative past, Corn Exchange gives us a glimpse of an all-too-possible future – one which is even now being enacted around the world. A play about the pitfalls of prioritising cash over culture? It couldn’t be more timely, or a more apt swansong for a soon to be much missed theatre company.

Since 1995, they’ve staged highly successful productions of works by the greats, from Arthur Miller to Anton Chekhov, Tennessee Williams to Samuel Beckett, but here are a few shows that wouldn’t exist at all were it not for Corn Exchange.

Premiering at the Dublin Fringe in 1998, you hopped into the back of a parked car to eavesdrop on mini plays from writers including Ryan, West, Arthur Riordan, Lynne Parker, Mark O’Halloran, Emmet Kirwin and more. It was some ride.

First performed at Project in 2004, and revived at The Abbey in 2017 to critical acclaim, this irreverent look at the founding both of the State and of the Irish National Theatre was a particular favourite with those who got all the in-jokes.

With maybe a nod to James Joyce’s Finnegans Wake, Freefall brilliantly got inside the mind of a man as he hovers between life and death following a stroke. Premiering in 2010, there’s also a whole state-of-the-nation metaphor going on.

Physical theatre meets film noir in this prescient 2011 tale of Farrell Binks, an office worker with an over-imaginative fantasy life, which offers a grimly prescient warning against retreating too far from reality.

A Girl is A Half-Formed Thing

The Fall of the Second Republic is at the Abbey Theatre, Dublin, from February 24th to March 14th.cornexchange.ie abbeytheatre.ie