Druid, Chekhov and the politics of power

Garry Hynes directs The Cherry Orchard, a play she says that’s still of the moment 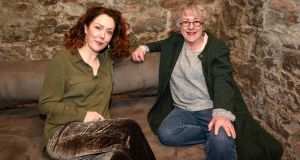 Derbhle Crotty and Garry Hynes before rehearsal for The Cherry Orchard, a Druid production

Power comes in many forms. There is physical power, inherited power, seized power. There is the extraordinary and frequently unexpected power of strong feelings, and the insidious power of unhealthy ways of being that drag us into decline. Add to that the power of tradition, and its counterbalance, the power of violent change, and you have quite a cocktail.

Speaking with Garry Hynes and Derbhle Crotty, in a chilly room painted in various shades of brown and purple, I’m also almost hyper-aware of the power embodied by these two very different women. At first, Crotty draws your attention. She has taken a break from rehearsals for Druid’s forthcoming production of Anton Chekhov’s The Cherry Orchard, and I have just been watching her pace the stage, not yet in costume, but clad instead in baggy cream pants and a cosy, sloppy green jumper. She wears them like a queen.

I get a look from Hynes that could freeze boiling water, or wither a strong plant in an instant

Tall, or more exactly, statuesque, she’s one of those rare people who makes, and maintains unabashed eye contact; and she smiles and laughs frequently as we talk. I find myself wanting to see things as she does, to believe what she projects, which is, of course, one of the enchantments of a really good actor. Beside her, Hynes is smaller, quieter, more measured, and yet when she speaks, which she does quietly, you feel the world around you pausing to pay attention.

And pay attention it has. Hynes was the first woman ever to win a Tony Award, in 1998 for directing Martin McDonagh’s The Beauty Queen of Leenane on Broadway. Add in a clatter of other awards and I’m intrigued to know why, after all this time, she has turned her attention to Chekhov.

“You don’t get to be in professional theatre for long before you become aware of Chekhov,” she says. It is the ensemble cast that Druid has built up that makes it possible now, she adds.

And it’s quite a cast: Aaron Monaghan has been at the rehearsal too, alongside Rory Nolan, Marty Rea, Rachel Feeney, Megan Cusack – and that’s not the half of them. Monaghan is playing Lopakhin and, as I watch, he’s trying out a phrase in different ways. With a small twist of intonation, he’s differently believable. I wonder which will make it into the final performed piece.

Hynes is almost unobtrusive in rehearsal, until she makes a suggestion. The actors are called by their character names, and everyone instinctively stops to listen when she speaks. The rehearsal room, on the edge of Dublin’s city centre, is one of those spaces that has clearly done time as a sports hall, am-dram spot, and has almost certainly hosted numerous raffles and cake sales. But right now, even though it’s only marked out in scaffolding and plywood, it’s a once-great house in Russia.

Chekhov can be wordy. In this adaptation, written by the late Tom Murphy, Irish rhythms make it maybe easier.

“It’s highly natural, isn’t it,” says Crotty. And of course, I believe her, you just can’t help it. “I haven’t found anything being a mouthful.”

Who is the most mouthful-ey, I ask. “Shakespeare,” she says immediately. “He’s so unique. But in terms of cumbersomeness, Shaw. Actors say that. Very tricky to learn, and really – yes, he never uses one word when he could use four.”

That sounds like a bit of a problem. “We welcome problems,” says Crotty, which makes Hynes laugh. “In solving problems, you find your way. So, if you’re responding to the demands of Shaw, you have to find the beauty in that long breath. Or you pick the specific words, you find the music. Wilde is very specific. You have to stay three, five steps ahead of the audience. You have to set it up like a snooker table.”

The pair go on to describe that feeling of losing an audience, which might simply start as a ripple in the density of attention, and the tricks and techniques to win it back. Crotty can recognise a particular cough that doesn’t come from having a sore throat, but is an audience response to boredom. Hynes pauses, about to say something. We wait.

“I have unfortunately something,” she announces. “I can’t regulate it. I can try to convince myself that something is good when it’s bad, but I have a muscle in the back of my neck. And if something isn’t working, either in my own production, or somebody else’s; if the audience isn’t connected, this muscle, it just starts at the back of my neck.”

Crotty claps in delight at the idea of her director actually being physically unable to endure bad theatre.

The action of The Cherry Orchard sprawls over four acts, as Crotty’s character, Madame Lyubov Andreievna Ranevskaya (let’s call her Lyubov for short) comes home to Russia to sell her family estate. The estate includes the eponymous cherry orchard. A former serf, made wealthy through drive, grit and acumen, Lopakhin represents the future, as the power of the aristocratic class fades.

Chekhov’s play was written in 1903, and premiered the next year, shortly before its author died. He knew he was dying as he wrote it, and yet it’s not suffused with melancholy, more a desire to see the world as it truly is. Perhaps that’s why critics, audiences and directors aren’t agreed on whether it is a tragedy or a farce. Chekhov described it as comedy with elements of farce, but its first director, the great Konstantin Stanislavski, played it as tragedy. Hynes prefers to see it as just life in all its richness and diversity.

She describes the process of mining that, “of unearthing it on the rehearsal room floor”, and compares Chekhov to Shakespeare in his ability to focus your attention on the small details as well as the large. “The brilliance is, he quite literally makes you feel for everyone. Just today, when we were working on Yepikhodov [played by Peter Daly]; he’s one of the most accident prone characters, and he’s trying to close a piece of baggage. Just for a moment he’s the entire centre of the play, he’s like Hamlet.”

“They’re all the lead actor in their own play,” agrees Crotty. “It’s about the lives, the loves, the follies and the ambitions of a large group of people, who bump into each other in all sorts of busy and unhinged ways.”

“The servants have more dramatic lives than anyone,” adds Hynes.

At this I venture to wonder if The Cherry Orchard isn’t more akin to a soap opera, and mention Downton Abbey. I get a look from Hynes that could freeze boiling water, or wither a strong plant in an instant. “That’s some look,” I say. “So now you know,” agrees Crotty with a smile.

“Downton Abbey is brilliant television,” says Hynes, relenting. “But it’s as far from this as you could possibly imagine. Downton Abbey treats a life to give us a soap opera.”

Hynes agrees. “His instincts are extraordinary. He wrote this in the year before the Russian revolution. His grandfather was a serf, but he was a medical doctor. All his family was beyond serfdom.”

“There had been reforms,” says Crotty, taking up the story. “But the reforms hadn’t been wide-ranging enough. So you had the beginning of revolution in 1905, and the real revolution in 1917.”

“You can see that he smells in the play the collapse of an entire world,” says Hynes. And as she says this, I get another yet another glimpse of her extraordinary power, as there is a vehemence in the words. The idea truly matters.

Is that, I wonder, one of the things that makes the play so relevant to now?

“The thing is,” says Hynes, “with a great play, like this, or any of the Shakespeare plays, their greatness is the reason they appear to be of the moment – always. If we had done this 20 years ago, we would have found it of the moment, for different reasons. Still,” she continues quietly, “I’m a 66-year-old woman. I’ve lived through the 60s and 70s, but you cannot but feel that things are more urgent now.”

Crotty and Hynes are a pair of those rare women who haven’t seen the need to mute their power. And maybe that’s the relevance: maybe now is the time for more of us to call on our own latent power, and make change – before a more unpleasant kind of revolution may come, and change everything, again.

9 Motown magic broke racial barriers - but at a price