Medea: The once-otherworldly sorceress as a worn-down, bitterly jilted woman

Theatre review: Eileen Walsh faces a challenge in this childcentric take on the tragedy 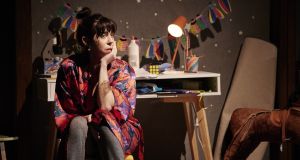 Gate Theatre, Dublin
★★★
Children are usually seen and not heard in Euripides’ version of Medea. They’re fought over by two bitterly separating parents, Medea and Jason, whose relationship as a sorceress and an adventurer had always been pretty rocky. They are used as instruments in their mother’s elaborate revenge against her rival. And finally, in the legend’s eternally shocking climax, they are murdered – with as much rash violence as chilling calculation. Hell hath no fury like a woman scorned, the myth tells us, but to children it giveth no voice at all.

Kate Mulvany and Anne-Louise Sarks’s 2012 play Medea sets out to correct this by confining the audience to an ominously locked bedroom, as Medea has done to her offspring. In a recognisably contemporary space, which Alyson Cummins trims with soft Ikea furnishings and a landfill of plastic toys (heroes and monsters, musical instruments and imitation weaponry: all the classics), we first find young brothers Leon and Jasper (Oscar Butler and Jude Lynch on opening night, who alternate with Elijah O’Sullivan and Luke O’Donoghue) lying on the floor, playing dead.

The scene is chilling for anyone acquainted with the plot of Medea, who will watch the play as a helpless prelude to their tragedy. It is still more disturbing to anybody who cannot push another Irish tragedy – one that is far too recent and too real – from their minds.

That echo brings another layer of complexity to the play’s impulse, which is to fold the qualities of startling myth into the texture of everyday life. In a game the boys play to pass the time (more Stoppardian than Beckettian, for two characters in the wings of a classic) the children name a string of animals: some real, some extinct, some fantastical.

As they innocently recount the story of their parents’ marriage – partly informed, partly protected, often perceptive – the play similarly translates each epic quality into more familiar, domestic terms. Jason’s golden fleece here becomes a reassuringly warm sweater; a manly keepsake for a neglected daddy’s boy. The Other Woman is referred to, with poignant modern euphemism, as “Daddy’s friend”. And, familiar as they are with “origin stories”, all the boys know about their mother’s bloody past is that it may have been as bad as smoking.

That makes the brilliant Eileen Walsh’s task all the more challenging, portraying a once-otherworldly sorceress as a worn-down, bitterly jilted woman, whirling between affection and cruelty in her pyjamas. Like the boys (who, for the most part, admirably hold the stage alone) we get only some of the picture, seeing Medea in fraught visits, where Walsh’s tight smile and rising pitch mask her real emotions.

But what are those emotions? And what is her state of mind? Medea professes all-consuming love in frightening terms (“I scream it into my pillow every night”), while locking their bedroom door with a heavy clank. The play asks us to see her a real person. But how do you solve a problem like Medea?

Director Oonagh Murphy, alive to similar confinements in the play’s limiting, naturalistic approach, includes subtle details that suggest something more – a bedroom, decked in glow stars, that seems to belong to the cosmos – but mutes disturbing others: the humiliation of a child, held captive, who wets himself, or the unimaginable situation of a boy trying to negotiate his freedom. We have always understood their horrific situation instinctively, though, without the need for adaptation, elaboration or modernisation: it’s how we’re wired. Medea, on the other hand, neither wholly deranged or demonic, remains unknowable.

Runs at the Gate Theatre, Dublin 1, until Saturday, February 22nd