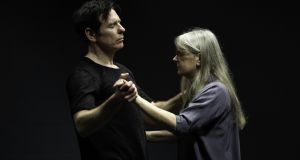 The pre-interview chat with Breandán De Gallaí is nice and gossipy. Stories of being sent back from Russia last year because of problems with his visa, orchestral concerts attended, as well as more personal stuff. Once the recorder begins to roll and the interview formally begins, his demeanour shifts.

“I had to do some homework and look back at my initial notes,” he says apologetically. “For me the creative process is so fluid and I’m a great believer in letting it take its course. But now I have to talk about it in a way that makes sense.”

This loose tension between heartfelt abandon and cerebral analysis is a constant in De Gallaí’s work as a dancer and choreographer. A traditional Irish step dancer, he also has a degree in applied physics, an MA in ethnochoreology and a PhD in arts practice. The performative and analytical sides constantly rub against each other whether creating choreography for his dance company Ériu or giving a TEDx talk on choreography.

“It seems to me that one project begets the following one,” he says. “While I was making Linger [a duet exploring sexuality, identity and aging], there were other issues emerging. We couldn’t address or investigate them in Linger, so then I created Aon, the Irish for one. I framed this group dance within the idea of identifying the authentic self within social networks. These issues have always been important to me because I’ve always felt this push and pull between the traditional Irish dancing self and the self who is bewitched by what is happening in the contemporary arts.”

This acceptance of the authentic self means embracing vulnerability, even celebrating it. And each person’s vulnerability is imprinted on their bodies.

“The moving body has shadows and blockages. It is not always perfectly fluid and I don’t necessarily see this as a bad thing, but as something that I can tap into and harness.” Formal dance training defines his own body, and through the years he has supplemented his traditional dance training with contemporary, ballet and social dance classes.

“That is imprinted, but so is the rest of your life, like who you are and how you were brought up. I want to tap into that. In my case, I look back to back-breaking work on a bog in Donegal when I was a child and my body wasn’t developed. Lifting creels or turf when you were too young to be lifting that weight.

“And then being gay. How I performed the least gay version of my body as I possibly could. Knowing that, I can now see it with other young men or boys and it is heartbreaking. People who just can’t be themselves.”

His choreography doesn’t start with analysis or technique but by asking a simple question: What is this body and what does it want to say?

“It is saying: ‘This is what you have because of 50 years of life, with all those experiences, all that training and all that trauma and pleasure.’ The challenge as a choreographer is harnessing all of that and letting it emerge.” This imprinted memory was also a starting point for his latest work, Walls Talk, but not just in his body.

“I’m interested in both the idea of universal consciousness and also how objects can have an emotional weight. It could be your mother’s hairbrush or the first bike that you got. It’s not just a memory, but much stronger. Just picking up the object can affect you.

“Then one night I was sitting in a pub with my partner Declan and I had the sense that the walls around us are filled with the memories of past actions. What are the disturbances that we leave behind? And there is a push and pull between that felt sense and logic. I have a scientific background, but it is nice to toy with it.”

In Walls Talk he has gathered a large collection of objects onstage, like a rocking horse, old gramophones and a standard lamp. “I wanted a lot onstage. If there were too few, then the audience would try to make connections between them. With a cluttered stage hopefully something will stir a reaction in each audience member.”

‘Loyal to the music’

Music is an important element in each of his dances. Last year he travelled to St Petersburg’s International Festival of Arts for a performance of his Rite of Spring, a version that forges step dancing with Stravinsky’s rhythmically complex score. The original ballet achieved notoriety on its opening night in 1913 with fights breaking out in the audience. Since then Nijinsky’s choreography was forgotten but Stravinsky’s music went on to become a concert hall classic. In more recent years, tackling the music has become a badge of honour for both ballet and contemporary choreographers who pride themselves on negotiating Stravinsky’s rhythms. Some dancers skim over those rhythms, while others engage with every nuance. De Gallaí is one of the latter.

“I definitely wanted to be loyal to the music,” he says. “Obviously, rhythm is very important to us Irish dancers, so I carefully listened to every single bar of music. In choreographing the other dancers it was important that they knew how to count the music, but then they had to learn how to stop counting it and make the dancing look more fluid and natural. De Gallaí was also unperturbed by the weight of history. He was drawn to the score not through artistic bravado, but by being blown away by an orchestral performance in Sweden when he was on tour with Riverdance.

“It was an incredible experience and I knew there and then that I had to choreograph to that music,” he says. Choosing the music for his latest work, Walls Talk, was similarly spontaneous, albeit in more informal surroundings: a post-performance sing-song in London.

“One of the dancers brought over a friend, who seemed quite shy and reserved. But when she sang it was one of those moments when I was stopped in my tracks. She sang some Billie Holiday songs and what grabbed me was the sense of her being at one with the voice and the message of the song.”

He asked the singer, Gina Boreham, to collaborate on Walls Talk and the pair set about creating a score for the choreography.

“We have songs from that classic jazz and blues era, but also included others,”says De Gallaí. “I grew up with this music and still remember discovering the heavy 78s in the attic.” Working with Boreham has also helped one of De Gallaí’s perennial problems.

“I hate the loneliness of a long day in the studio by yourself. It is difficult to create material on yourself and the only way I can manage that is really schedule it. So I set outcomes for each morning and afternoon. Gina didn’t have to be there in the studio in London, but I was dying for her to turn up, because I needed the companionship.” He has never worked with an artistic assistant or dramaturg, but is more drawn to the idea than before.

“I met one from the Netherlands during a Dance Ireland project. It was a week-long intensive and I presumed that this person would force their aesthetic or views on what I was doing. It was actually the opposite. They helped me stay focused on my goals and even if I strayed from those goals I did it consciously rather than just getting distracted.” For now he will have to rely on Boreham’s quiet presence in the studio to help him stay focused, even if they don’t interact. It’s a bit like their relationship onstage in Walls Talk.

“We’re onstage together but Gina is not inhabiting the same universe. It feels like we’re two entities moving in parallel. We’re not two sides of the same person or lovers. I’m not that spiritual and I don’t believe in God, but I think that there is a sense that we are the one entity. That’s where Aon came from. It’s the idea that when we die we will realise that we are all the one unit. And if only we could embrace that philosophy the world would be better and more empathetic.”

Walls Talk is at Project Arts Centre from February 25th-29th