Kilkenny’s art of the possible

As the world threatens to spin apart, this year’s arts festival concentrates on what keeps it together – just about 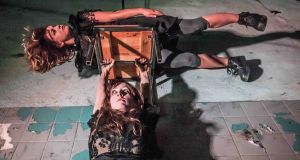 Loosysmokes, ahead of the world premiere of Raven Eyed at The Brewhouse, Abbey Creative Quarter, in Kilkenny. Phoyograph: Pat Moore 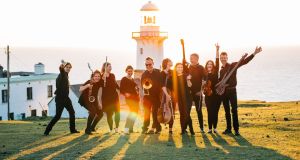 As the world threatens to spin out of control, this year’s Kilkenny Arts Festival (Aug 11-20) takes a look at what keeps us together in times of chaos and challenge. At the centre of its theatre programme is Counting Sheep (The Hub, Cillín Hill, Aug 13-19), an immersive music theatre experience inspired by the Maidan Square protests in Ukraine and the Revolution of Dignity that took hold of Kiev in 2014. Created by Mark and Marichka Marczyk, who first met behind the barricades of the protest against Ukraine’s swing towards Russia, it is told entirely through Ukrainian folk songs, sourced by Marichka, and performed by Mark’s Canadian Balkan-klezmer-punk band the Lemon Bucket Orchestra. A huge hit at Edinburgh last year, it depicts the revolution as a polyphonic force and a community under stress, in which the audience can participate or observe.

Ireland’s award-winning aerial theatre group Loosysmokes present the world premiere of Raven Eyed (Brew House, Aug 12-20), a spectacle that explores the boundaries between the past and the present within a turbulent dreamscape, by blending soaring aerial performance with sense-filling audiovisual creations. Also considering generational inheritance is artist in residence Colin Dunne with a recent piece Concert (Watergate, Aug 12) – the dancer’s response to fiddler Tommie Pott’s radical reinterpretation of traditional music – which brings together live performance and archival recordings (Watergate, Aug 18).

This year’s Hubert Butler Annual Lecture (St Canice’s, Aug 12) is delivered by Eva Hoffman, the Polish-born memoirist, who shares her perspective on the state of Europe today.

Author Yiyun Li talks to Cormac Kinsella about her own memoir, Dear Friend, from My Life I Write to You in Your Life which explores everything from her time in the People’s Liberation Army to her decision to renounce her native tongue. And the makers of luminarium, Architects of Air, celebrate their 25th anniversary with Albesila, bringing a dome filled with stars, colour and ever-changing lights to Castle Park (Aug 12-20).

The Movie Quiz: What is the completely made-up tagline for ‘Jaws 19’?
7