Cover My Tracks review: Goodnight Galway, there will be no encore

Charlie Fink and David Greig’s smart, subtle collaboration depicts a relationship, a separation and a hard act to follow 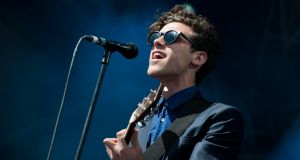 If anyone can record and release music on their iPhone, says Charlie Fink’s character, the most radical gesture now is to leave behind a ‘silence in the shape of an album’. Photograph: Gaelle Beri/Redferns/Getty

Cover My Tracks, a clever and delicate collaboration between musician Charlie Fink and writer David Greig, is a short performance about a hard act to follow.

A play with songs (or vice versa) it begins with Fink, the former frontman of the band Noah and the Whale, sitting onstage in the gentle delivery of a song about the end of a relationship – either romantic or artistic – in a voice that recalls early Bob Dylan and Lou Reed. It’s a fitting association: two magnetically attractive troubadours, both of them fascinatingly aloof.

In the Old Vic’s production, the play comes in hot pursuit of the music: Rona Morrison, our more earthbound narrator, arrives to the small bare stage with an accusatory vigour, directed at her absent partner. Her second-person address identifies them only as “me” and “you”, to which Fink sometimes answers, as though they were eternally intertwined. Even as she describes his funeral, for another young singer who disappeared and was never found, she is unable to let him go.

She begins to retrace their footsteps, in the hope of somehow retrieving him, from the moment she interrupted this moderately famous pop star’s suicide attempt, in a faceless Scottish hotel, through their time touring the pubs of Britain as a fledgling musical duo.

If the quest recalls Orpheus and Eurydice, another duo synonymous with song, a painful split and a difficult comeback tour, those bells are lightly rung. Morrison’s pursuer is joined on the way by a dog named Dionysus, after the Greek deity of wine, theatre and all things fun (“Please remember to feed the god” she is reminded).

But life on the road, for both of them, has already been one of Dionysian pleasures and misfit torments; of polyamorous encounters, fitful first gigs, fluke hit singles and a rioting audience – with the feeling that they are whirling agents of damage, hurting anyone they encounter.

If that seems like a moody adolescent fantasy, which some artists can sustain indefinitely, they almost say as much: to be endlessly transformable is his idea of heaven, her idea of hell. More unsettling, though, is the romance invested in his desire to disappear, a kind of artistic suicide, as deluded as the idea that you’ll miss me when I’m gone.

If anyone can record and release music on their iPhone, says Fink’s character, (“the whole 20th century in your pocket”), the most radical gesture now is to leave behind a “silence in the shape of an album”. It’s a sardonic nod from a writer and a musician who are nowhere near as pretentious – Fink released his debut solo record last month, whose songs Greig’s play deftly incorporates without seeming either a companion piece or a promotional device.

The more sustaining relationship it depicts, finally, is one of collaboration and continuation, something to which the title gently alludes. Song writing, he tells her at one point, is “mostly about fixing mistakes”. We all leave footprints, trails that can be retraced and improved, and people to take up the journey.