Jimmy Gralton was infamously deported from his own country for giving his community a space for dancing and revolutionary ideas. There’s more room for the former than the latter in the Abbey’s handsome, musical and nostalgic telling of his tale 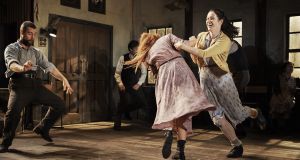 At an early point in this handsome, lively and sonorous stage adaptation of Ken Loach’s recent film, one character relates an anecdote that is nowhere in its source material: the sad experience of destitute Irish potato pickers in Scotland during the 1930s.

It bolsters an association that the production itself seems keen to claim, ensuring that this account of James Gralton – Leitrim’s unabashedly communist organiser of community events, dances and political dissent – has some of the flavour of Scotland’s renowned socialist theatre maker, John McGrath, by bringing a good-night-out entertainment, with some Brechtian posture, directly to the people.

That lends a pleasing poetry to director Graham McLaren’s production for the Abbey: deferential to neither church nor state, Gralton was infamously deported from the country of his birth; whereas the ideas of McGrath, British-born to Irish parents, can be more unfussily repatriated. On Colin Richmond’s set, a cross-section of the Pearse-Connolly Hall, the show begins with an extended ceilidh (whose gifted player-performers may remind you of the energies within the musical Once), silenced by a gong, before an actor introduces the story.

The Abbey may see its mission as something analogous to Gralton’s, providing a secular space for culture, heritage, ideas, and – in one line that sadly hasn’t been retained from Paul Laverty’s screenplay – occasions for “pelvic thrusts and salacious body grabbing”.

Whether you find this version pleasantly accessible, or slightly patronising, will depend on your appreciation for self-deprecating, first person exposition (Gralton’s revolutionary crime? “I built a hall in a field in Leitrim,” says a charming Richard Clements), toothsome ensemble numbers, and the moment anyone hits on an historical injustice, turns to the audience, and asks for the house lights to be brought up.

There is something nostalgic in such manoeuvres, only slightly alleviated by invigorating anachronisms of rebellion and independence through the ages. We get a jig that embraces snatches of I Fought the Law, for instance; dances, choreographed by Vicki Manderson, whose pelvic thrusts and salacious body grabbing recall the abandon of Lughnasa; and spirited versions of Whitney Houston, Van Morrison and Philip Chevron songs in between scenes of resistance against suppression and eviction.

The ceilidh form dominates, allowing for some spellbinding songs from Lisa Lambe, as Jimmy’s lost sweetheart, Oonagh, Ruth McGill as Tess (wearing Rosie the Riveter overalls) and, most striking of all, one beautifully lamenting number from Bríd Ní Neachtain, as Jimmy’s mother, Alice, encased in gorgeous harmonies. But it also means that everyone, including Bosco Hogan’s censorious priest and Donal O’Kelly’s puritanical Blueshirt father, must come to the hall (unlike the Abbey, it won’t come to them), making cultural clashes and competing ideas of nationhood harder to ration. One illustration of that confinement sees Gralton warned that a rabble-rousing speech will get him shot, to which he shrugs, “Well, then, let’s dance.” That, the show suggests, really is his cure for everything.

Movement, however, whether physical or popular, is presented full-heartedly as a political act, led by the beat and buoyed by the optimism that any gathering carries revolutionary potential. Here, in this cheeringly off-site premiere for the National Theatre, they have the means to engage and enthuse, and only the message to refine and amplify.