Belinda McKeon: 'I’m interested in the deal-making among couples'

The writer on reimagining Henrik Ibsen's Nora for a modern generation 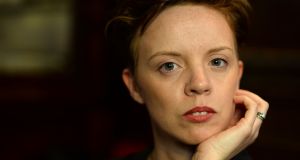 Belinda McKeon: ‘I knew that I wanted to write about people whose lives are devoted ostensibly to beauty and art – but really, wealth and power is so much a part of it.’ Photograph: Cyril Byrne

Shenanigans in the world of big art: that’s the subject of Belinda McKeon’s new play, Nora. A reworking of Henrik Ibsen’s A Doll’s House, the piece was commissioned by Annie Ryan for the Corn Exchange, and will premiere at the Dublin Theatre Festival in September.

Ibsen’s original is set in the world of banking. But McKeon knew immediately that she would people her play with gallery glitterati. The world of international art dealing, which featured in her 2015 novel Tender, clearly fascinates the Longford-born, New York-based writer. “I knew that I wanted to write about people whose lives are devoted ostensibly to beauty and art – but really, wealth and power is so much a part of it,” she says.

The contemporary art market offers a fertile setting in which to explore the values with which Ibsen was concerned in A Doll’s House: authenticity, value, honesty. “It lives on hype and on its own excitement,” McKeon says. “A work of art is worth $15 million one day and two weeks later it’s worth $30 million. And there’s no rhyme or reason around that.”

McKeon began work on the play in New York last autumn – so, almost inevitably, the US presidential election played a walk-on role in her thinking. “At that time there was a lot of pretty interesting material coursing through the everyday,” she says. “I can’t remember when I realised that I wanted the play to be set a few years into the future – but it definitely solidified around the time of the election, when we all started wondering what will the world look like in a few years’ time.”

Nora is set in an unnamed city – “it could be Cape Town, it could be Dublin” – a decade from now. Whereas in Ibsen’s play the central couple, Nora and Torvald Helmer, are celebrating Torvald’s promotion with a big Christmas party, in McKeon’s version, Nora and Turlough are hosting a dinner to mark the end of Art Week, an event they’ve created, and which has helped make their city into a major international art destination.

McKeon recalls reading an article in the business section of the New York Times that predicted that Trump’s election would make 1980s excess fashionable again. “The art world is partly about the love of objects and showing off your acquisitions. It’s about artists making work but it’s also about very wealthy collectors buying objects to bolster their prestige, to show that they’re people who are capable of spending $15 million on a painting.”

“I thought, if that does happen – if this election does result in further booming in an art market, which is already booming and is so unregulated – it’s an interesting area to write about. What will art cities look like in four years or eight years?”

McKeon’s isn’t the first adaptation of A Doll’s House to call itself Nora. Ingmar Bergman used the same title for his 1989 staging; as early as 1923, a German silent film was also named after the heroine. For McKeon, too, the character of Nora – a role which will be played in this production by Annie Ryan – represents the beating heart of the piece.

“The children in the Ibsen are so peripheral: they’re just toddlers. But I found myself thinking, How does this story affect the little girl? What does she see? What does she take in? Is she like Henry James’s Maisie: does she notice everything, much more than the adults think she does? I wanted my Emmy to be a very, very aware teenage girl.

“I’m always interested in writing about young women – what they’ve inherited, or what the previous generation has given them.”

Ibsen based his play on the real-life story of Laura Kieler, who got to know the Ibsens after writing a novel called Brand’s Daughter in the 1860s. In 1878, she sent the manuscript of another novel to Ibsen, hoping he would recommend it. Kieler needed money because she had borrowed to take her tubercular husband to Italy to save his life. But Ibsen thought the book was dreadful, and wrote to Kieler telling her so. The desperate Kieler forged a cheque, was found out, disgraced, and committed to a lunatic asylum.

The challenge for anyone adapting A Doll’s House is to rework the central relationship for an audience that is accustomed – at least in theory – to greater equality between husbands and wives. But as every writer of psychological thrillers or TV soaps is well aware, when you get down to the nitty-gritty of domestic detail there’s still plenty of drama to be mined.

“I’m interested in the sort of deal-making that happens in a power-couple marriage where everything looks perfect and polished from the outside and it looks like they’re behaving as a team,” McKeon says. “With Nora I wanted to write a character who’s doing a lot behind the scenes. A woman who is very, very powerful and capable – but who wants that to be invisible.

“She’s a fixer. To Nora, it’s important that her husband is the public face of their success. His name is the name on the gallery. She does a hell of a lot behind the scenes to make sure that there’s no rupture in that polished public sheen. She wants everything to be perfect. But she’s also willing to work very, very hard to make sure that her husband feels powerful. That’s a complex female character to write in 2017, but I feel it’s true to the psychological reality of what it is to be a person.”

Nora’s old friend Krista, an artist who turns up out of the blue during the couple’s Art Week, is a very different female character. “She’s a person from a time in Nora’s life when Nora was a different type of woman – and also a different type of feminist,” says McKeon. “She reminds Nora of her previous self. Nora has choreographed the surface of her life very carefully, but Krista is a rupture. She comes from the past and she can’t be controlled. She brings an entirely different energy and perspective with her.

“And she’s an artist, so there’s the separation between the person who makes the work and the person who sells the work, turns it into this very very valuable commodity. I think there’s a lot of tension in the art world between these two. An artist also wants to be successful, so what kind of compromises does an artist like Krista have to make?”

The Corn Exchange production of “Nora”, by Belinda McKeon, is at the Mermaid Arts Centre in Bray from September 21st to 23rd, and at the Project Arts Centre as part of Dublin Theatre Festival from September 27th until October 8th. dublintheatrefestival.com