In defence of The Ferryman by Jez Butterworth

London’s big theatrical hit has been criticised for its alleged Irish stereotypes but it is powerful and layered with echoes of Marina Carr, argues actor and author Gerard Lee 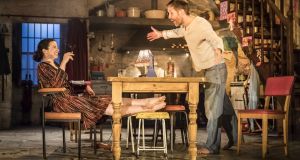 Although it is currently enjoying rave reviews and packed houses in London, Jez Butterworth’s new play The Ferryman has also attracted some negative comment, principally around his portrayal of the Irish character. If you accept this criticism, then there’s a big problem, as all bar one of the 20-odd characters on stage are Irish. I saw the play recently, and here are some thoughts on why I consider the criticism to be unwarranted.

There’s a line in Alice Oswald’s poem Pruning in Frost that seems to me to capture the essence of The Ferryman:

“a ghost of a world lay down on a world”

Before the audience has a chance to fully settle in to the given geographical place and time – Armagh in 1981 – the character of Uncle Pat is already hinting at another, less tangible world, the world of myth, of the old and the new gods.

“In the beginning all the gods were hunting gods.”

Mind you, the gods have previous with Jez Butterworth. In his remarkable earlier play Jerusalem, the author has the Professor pay his respects as he drinks:

“To Titania. To Woden’s wild hunt/ To the blossom and the May-come/ St George, and all the lost gods of England!”

Uncle Pat is a man who likes to stay up into the wee hours, sharing a drop of Bushmills with Virgil, whom he reads voraciously, and his connection with “the ancients” is crucial to accepting the wheels-within-wheels structure of The Ferryman. You could also argue that there’s a clue in the title, as in mythology Charon ferries souls from this world to the next.

(It’s interesting to note that Nick Laird’s new novel, which also deals with the legacy of violence in Northern Ireland, is titled Modern Gods.)

Uncle Pat: “Then the Greeks discovered that the land was magical.”

The image of hammering weapons into ploughshares seems an apt one for Uncle Pat’s nephew Quinn, who has abandoned the ways of violence to work the land, and live peacefully by the sweat of his brow. The question for Quinn Carney, though, is – like Clint Eastwood’s “retired” gunslinger in Unforgiven – can anyone ever simply renounce the past and climb free of history? Images abound of the struggle to shake loose the clammy, accusing hand of history and the foul deeds it may conceal, for example in Oisin’s doomed kite:

“This is the cross spar. That’s the spine. It’s like a skeleton. So when the wind takes it, it’s ready. It all holds together.”

Well, that’s the hope. Uncle Pat continues with what might be described as a version of the rosary, but one which is distinctly his own. He enunciates a litany of his old friends, the gods:

“Hestia, the goddess of bread, Cyametes, she of the bean, Dionysis, him of the grape, and the mighty Demeter, Queen of all the Harvest…”

Almost immediatly he conflates the two worlds of the quotidian and the mythic, the two sides of the coin in The Ferryman; he praises Demeter, “who made the first loaf, the bread our saviour broke”, but instead of then touching his lips to a sanctified chalice filled with holy wine, the giddy spirit of Dionysis guides Uncle Pat’s hand to the bounty of a different grain, an altogether more worldly dram of Bushmills. This establishes a pattern, as Uncle Pat oscillates between the two worlds of The Ferryman. It is a juxtaposition which is central to the architecture of Butterworth’s layered and powerful play.

But it’s not just Uncle Pat who has to perform this dramatic tightrope act between two worlds. Other characters are also given the difficult task of balancing two buckets; the one full of muck and pig-shit, the other smoking with echoes of old yarns and tales of crossings-over from the Underworld. Dramatically, you could argue that it’s a risky strategy. Looking for a successful exponent of the style among Irish playwrights, Marina Carr seems like an obvious point of reference.

Then there’s the Englishman Tom Kettle, who was 12 years old when he was found on the river bank, like some pre-pubescent Moses. The image of the untrustworthy foreigner, the usurper who has literally washed up on the native shore, lingers throughout the play, and questions are asked from early on about who he really is and why he’s living there among the Irish.

Uncle Pat: “Let’s not be teaching the wean that being English makes you wicked.”

When he’s not busy collecting thunder, floods and rainbows, Tom Kettle is pulling rabbits and apples, entire orchards of apples, out of his pockets.

Here at harvest time, he’s a regular conduit for all of nature’s bounty, so naturally enough it’s Tom Kettle who knows exactly where to look for the escaped sacrificial goose. This simple-minded Englishman is tolerated, liked even, as though his barmyness keeps him below the radar in the community of the scarred and the eccentric amongst whom he dwells – just as long as he remembers his place. Even if some, like republican Aunt Pat, never forget and never trust.

There’s Aunt Maggie Faraway, who also seems – via her dementia – to be poised somewhere between this world and, well, some other world. She flits back and forth between happy childhood memories, and dark premonitions. These unhappy portents are also fed by events in the past, and Aunt Maggie too seems doomed to hover somewhere between these two forces of history, the one that can only be recalled as childhood nostalgia, and the other a malignant and inevitable force that keeps returning with a thirst for vengeance worthy of a Greek tragedy. When the body of one of “the disappeared” – Quinn Carney’s brother Seamus – is discovered, preserved in a bog, impatient history finally steps in through the door with the insistence of Hamlet’s father’s ghost, demanding retribution.

Magennis: “You see, Father, there’s no oxygen down there. The peat is acidic. It pickles you. The years roll by and nothing changes.”

And then there’s the whiskey. Ah, the whiskey. There’s certainly plenty of whiskey in The Ferryman. It’s fairly whirled around like blazes, and you might at times be forgiven for thinking that the ghost of Tim Finnegan himself had joined the party, via the portal of the increasingly Dionysian and frenzied harvest rite. Banshees get a look in too, but they also have a cameo in Butterworth’s Jerusalem, a play set entirely in England, and with a wholly English cast of characters. And Jerusalem also has some death-defying bouts of drinking.

I could go on, (I won’t) and no doubt there are other nits to be picked, but if the play makes it to Ireland, and I sincerely hope it does, how Irish audiences react to The Ferryman may depend on the extent to which they (we!) are willing to accept the structural dovetailing of myth and history that form the dramatic heart of the piece.

Watching the play in the Gielgud Theatre recently, my wife and I had no sense whatsoever that the mostly British audience were somehow celebrating an evening of mocking Irish cultural stereotypes. On the contrary, the brief conversations we had with English people around us during the interval indicated that they were thoroughly absorbed, genuinely engaged with a world that is utterly unknown to most of them, and grateful for the frequent bursts of tension-relieving humour. To hear a character with an Irish accent proclaim of Margaret Thatcher:

“If she was standing here I’d fuckin’ take a knife from that drawer and I’d disembowel that smirking, sanctimonious, stone-hearted sow right here on this table, so I would.”

Well, to be Irish and hear that in a theatre in the heart of London creates a very particular sensation, so it does. And this isn’t some cheap swipe from a safe distance. Thatcher is far from forgotten, at least in London theatre. There’s a hugely successful revival of Jim Cartwright’s 1986 play Road, directed by John Tiffany, running in the Royal Court. While the Iron Lady certainly takes a kicking in Cartwright’s play, even there nobody proposes the full Game Of Thrones treatment offered in The Ferryman.
The Ferryman by Jez Butterworth (Nick Hearn Books) runs at The Gielgud Theatre until January 2018. Gerard Lee is an actor and writer. His novel Forsaken is published by New Island Books