Vodafone Comedy Festival: Here’s everything you need to know 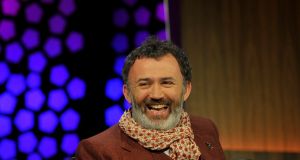 Every year, the Vodafone Comedy Festival brings some of the biggest names in comedy to the Iveagh Gardens, as well as introducing us to someone brand, spanking new in the world of stand up.

Running from Thursday until Sunday, you can catch up with great Irish acts such as Tommy Tiernan, Dara O’Briain, PJ Gallagher and Joanna McNally and we’ve been graced by the presence of some comedians from even further afield. Over from the UK, we have Tim Key, John Wilkinson and James Vetch. From London via Australia we have Last Leg presenter Adam Hills and Deborah Frances-White, who will be recording a live episode of The Guilty Feminist on Saturday and Sunday with some very special guests. And from the US we have Aparna Nancherla, Jackie Kashian and Anna Drezen.

Over the course of the weekend, the comedians move around as warm up acts, guests and headliners so that means that you have the chance of seeing at least two new acts that you’ve never seen before if you just make it to one show.

Are tickets still available? They are indeed. Tickets vary in price range from €20 - €30.

What else can we do there? The festival is also running a series of free shows through the Vodafone Laughter Lab. Some of the best comedy groups in Ireland, like Cherry Comedy and The Comedy Crunch, will be showing off their best lines just for you and you can sit in on live recordings of Headstuff’s Reviewables Podcast, The Alison Spittle Show and Jarlath Regan’s An Irishman Abroad.

How do I get there? The entrance to the festival is located on Clonmel Street, just off Harcourt Street and the nearest green line Luas stops are a short stroll away at St Stephen’s Green and Harcourt.

Iveagh Gardens is very central and any Dublin Bus routes that bring you close to Wexford Street or Stephen’s Green are your best bet.

What about the weather? The weather over the weekend will be warm but some light showers are expected on Thursday and Saturday, with slightly heavier rain coming in on Sunday. Luckily, you will be sheltered by one of the five fully-seated tents all weekend long.

What about security? It’s the by-now-standard gig security. Guests will be searched upon entry and only bags that are A4-size or smaller will be permitted and umbrellas are among the banned items, including anything recording devices, laser pens, glass or anything that can be used as a weapon. Pack light to keep the wait in line for security checks to a minimum.

Domhnall Gleeson, locked down in Dublin: ‘Oh s**t, this is embarrassing’
10