The best theatre to see this week 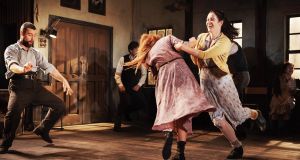 In 1932, at the beginning of de Valera’s Ireland, and the last years of the bitterly divided Free State, James Gralton returned to Leitrim from America. Reopening the Pearse-Connolly Hall, a secular community space he built years earlier for cultural lessons, debates and dancing, Gralton was an enthusiastic organiser who was insufficiently deferential to either church or state. Barely a year later he was deported as an illegal alien from the country of his birth. Adapted from Ken Loach’s 2014 film, director Graham McLaren burnishes Gralton’s legend for the Abbey Theatre with a production that takes the form of a ceilidh, performed by a bright ensemble of player-performers whose jigs, dancing and audience address suggest what might happen if Once The Musical met the populist agit-prop of Scotland’s legendary 7:84. Jubilant and earnest, sometimes to the point of self-seriousness, it is buoyed by the idea that any gathering has revolutionary potential, but is most steady in the simple joys of bringing people together.

A double bill of short Tennessee Williams plays puts the story of a teenage girl, Willie, who lives alone in her family’s abandoned house where she dreams of a life filled with admirers, next to the experience of a young couple trying to carve out a safe refuge in a cruel city. Bairbre Ní Chaoimh directs Maria Guiver and Daniel Monaghan in this miniature repertory of Williams’s This Property is Condemned and Talk to Me Like the Rain and Let Me Listen, where gentle sustaining illusions meet the harsher textures of reality.

The last time Smock Alley staged Richard Brinsley Sheridan’s comedy of manners The Rivals, it was the Irish premiere of a very new play. That was in 1779. If the play has held up as well as the theatre’s stonework since then, it may owe something to the convolutions of the plot, so tangled with crossed purposes, competing affections and invented characters it can be hard to identify the rivals in question. For simplicity sake there are about five – including one alter-ego and one father – jousting for the honour of a prickly demure Lydia Languish, among whom are a swaggering Captain Jack, the anguished swain Faulkland, a gormless suitor Acres, a stage Irishman Sir Lucius O’Trigger, and, most memorable of all, Mrs Malaprop. In director Liam Halligan’s production, her mangled maxim is still likely to inform any Rivals revival: “We will not anticipate the past, our retrospection will now be all to the future.”