The Scottish island the British bombed with anthrax

Set in 1939, the play ‘Outlying Islands’ is inspired by a real life military experiment 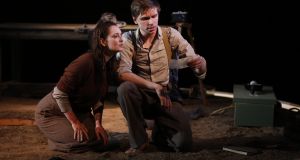 For all their beauty, offshore islands can be oddly claustrophobic. And if you’ve ever been stuck on one for longer than you expected – even if you were just waiting for a ferry to get you out of there – the set-up for Sugarglass Theatre Company’s new production of Outlying Islands, by the Scottish playwright David Greig, will send a shiver of recognition down the back of your neck.

Director Marc Atkinson and set designer Colm McNally have confined their four actors to a tight circle of earth, which rises from the centre of the Samuel Beckett Theatre’s performance space, and will be ringed by a forbidding halo of light bulbs. The set’s striking “otherness” epitomises the play’s themes of war, weaponry and environmental destruction. It’s also, as Atkinson explains, absolutely central to the company’s interpretation of the piece.

“Sugarglass is very eclectic in terms of the work that we choose,” he says. “We do new plays. We do old plays. But one thread that has always gone through our productions is how we treat space. Greig’s play was originally set in a tiny chapel on a small island: we decided that the stage would be the island.”

Outlying Islands is based on a real event. Just before the outbreak of the second World War, the British government decided to bomb an island off the west coast of Scotland with anthrax, in order to test the efficacy of chemical weapons. Closed for 50 years and “decontaminated” in 1990, Gruinard Island is still a weird, creepy and possibly dangerous place.

The danger in Greig’s play, however, arises from the explosive relationships between its four characters: the owner of the island, his 17-year-old niece, and two visiting naturalists who have arrived, ostensibly to study birds.

Despite its 1939 setting, the script is hugely relevant to our unsettled world. “For me there are several contemporary resonances,” Atkinson says. “One is environmental. The case for this land; who really owns it, and who decides what use it’s put to. The other is this sense of what it meant to be young, months before the war broke out. Knowing that war is coming; knowing that your future is completely uncertain.

“I don’t want to get too heavy on the parallels, or say that we’re on the cusp of world war, but we presented this in New York with some of the same cast about a year and a half ago – and I suddenly feel it has become much more resonant in the past 18 months. To see the institutions that you trust start to crumble around you, and not knowing what the future might bring: I think this play hits on all of that really well. The play both celebrates and questions youthful wildness.”

A theatre company with one foot in New York and the other in Trinity College Dublin (TCD) is an unusual and ambitious entity. “Sugarglass started by happenstance,” Atkinson says. “A lot of us graduated from Trinity around the same time. We were making work together anyway; we needed a company name and a bank account; so Sugarglass was born.”

Four years ago Atkinson moved to New York to study directing, and started making work there. When several company members also found themselves crossing the Atlantic, they had to decide whether to let Sugarglass go or allow it to evolve into something new. They decided they would try to develop something which would be part repertory company, part transatlantic touring network.

“This whole project is so exciting for us because we’ve started to develop this relationship with Trinity and the Beckett,” Atkinson says. “Every year the second-year students here do a big ensemble production. Usually they hire a solo director to work on that, but we approached them with a proposal where we came in as a company to work with the students. In return, they’re allowing us to use the space here.

“So I’m getting my little dream of a mini rep company where we’ll be running this show in the evenings, and then the same people will be working in the space during the day to develop our next project, which is Gorky’s Children of the Sun.”

Outlying Islands is an apt play with which to inaugurate the “over there, over here” model because it is, in many ways, a game of two theatrical halves. As I watch Jefferson White and Leonard Buckley, as the naturalists, rehearse the opening scene, moving tensely around their bijou circle with the dexterity of dancers – or, maybe, boxers – I find it hard to imagine the action taking a more bacchanalian turn. But that’s what happens after the interval, when the story’s female character, played by Maeve O’Mahony, moves centre stage.

“Each character has a different journey of self-discovery,” says Atkinson. As this self-discovery also involves nudity, the production carries an “over-16s only” label.

With such a potent emotional mix on stage it’s perhaps not surprising that Sugarglass has commissioned an original score – or, more accurately, soundscape – for the show. “It’s a nod to the fact that Outlying Islands was originally a radio play,” says Atkinson. “But also, it’s such an atmospheric play. It’s a way to make that come alive without going: ‘And now the sound effects. The storm.’ ”

Lester St Louis, a cellist from New York, will be joined by TCD drama student Lara Gallagher and composer and playwright Eoghan Quinn who, between them, will play keyboard, saxophone, percussion and some other bits and bobs. “The way in which they play mirrors the action on stage,” Atkinson says. And when the actors overdo the whisky, well, the music mirrors that too – in a joyful sort of way.

Do all Atkinson’s productions have a lot of drinking in them? “Why do you say that?” he responds, innocently. Well, there was Sugarglass’s immersive Fringe extravaganza from a few years ago, All Hell Lay Beneath, which was actually staged in Cassidy’s Bar on Westmoreland Street. Currently he’s working on the Gate’s production of The Great Gatsby, which is one mammoth jazz-age party. But if you’re measuring by the drama, Outlying Islands outdoes them all.

“Hmm,” Atkinson says. “Maybe more so when we’re here than in New York.” Which, come to think of it, is one more reason to make transatlantic theatre work.

Outlying Islands is at the Samuel Beckett Theatre from August 10th until September 2nd. tcd.ie/beckett-theatre

“I did some research on this play with my own kids at the weekend and their minds were just blown,” says Christina Matthews, who is putting together an outreach programme for Outlying Islands’s run at the Samuel Beckett Theatre. “With North Korea launching a shell the day before, they couldn’t believe how relevant the story is. As citizens of the world, how do you cope with this?”

For members of youth theatre groups and stage schools a less earth-shattering, but still potentially life-changing, question is: how do you get a foot into the world of professional theatre?

Sugarglass is hoping to provide at least some answers with a series of outreach workshops. “We have various options,” Matthews says. “The show is at 7.30pm, so they can come up at 4.30pm and do either a directing workshop with Marc, or a technical workshop with me: stage management, props, design, that kind of thing. After the show Colm, our designer, will bring them backstage. There’ll also be the option for a meet-and-greet with the actors and musicians.”

Groups can choose to do both sessions, or just the meet-and-greet. Monday and Tuesday nights during the run are being earmarked for outreach sessions, but Matthews is open to alternative suggestions. Having a background in disability arts work, she has also created a workshop that can go out to day care or drop-in centres, exploring the core issues of the play. “It’s about making the art available to as many different groups of people as possible,” she says.

To sign up or find out more, email christina@sugarglasstheatre.com.